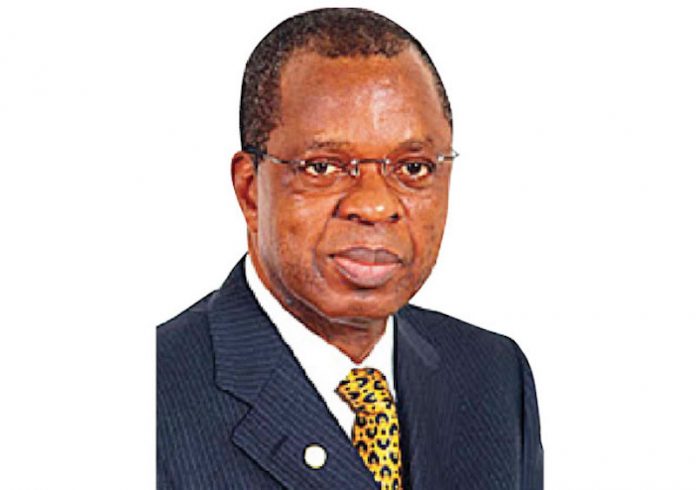 He has done so well for himself as a banker and many look up to him as a mentor and an inspiration.

For a man who commands great respect in the society, he will go to any length to defend his hard-earned reputation.

Perhaps, this explains why the Enugu State-born banker has engaged Trustbond Mortgage Bank in a legal battle over a sum of N983miillion debt.

Obieri, a former President of the Nigeria Stock Exchange and Chairman of Harmony Trust and Investment Limited Company, is said to have instituted a N535,500,000 suit against Trustbond Mortgage Bank Plc, for an alleged harassment, intimidation and blackmail.

In a statement of claim filed before a Federal High Court in Lagos by a Lagos lawyer , Dr Oladapo Olanipekun, SAN, the plaintiff alleged that Trustbond Mortgage Bank Plc (formerly known as Intercontinental Homes Savings and Loans Limited) made investment in the sum of N752.5million plus interest of N93.1 million being a total sum of N845.6 million in Summit Capital and Asset Management Limited Company by way of placement.

As of the time of the placement, Obieri was both a director in Intercontinental Homes Savings and Loans Plc (now Trust bond Mortgage Bank Plc )and Summit Finance Company (later renamed Summit Capital and Asset Management Limited).

He also claimed that the loans granted to the staff of Intercontinental Bank Plc were never repaid.

In the suit, the plaintiff also stated that during a meeting of the Board of Directors of Summit Capital and Assets Management on October 29,2013, it was resolved that the company be voluntarily wound up and a liquidator, Donald Agu, was appointed by the company for that purpose.

He said also that TrustBond Mortgage Bank Plc allegedly singled him out for intimidation via a letter dated November 7, 2017, in which it threatened to issue a petition against him to the Economic Financial Crimes Commission, EFCC, and the Attorney General of Federation, AGF.

Consequently, Obieri, while demanding the sum of N500 million as general damages, N10million as special damages, N15million as exemplary damages, N10.5million as the cost of this suit, urged the court to restrain the bank and its agents from making any demands for any sum from him and from further harassing and intimidating him.

However, in a statement of defence and counter-claim filed before the court on behalf of Trustbond Bank Plc by a Lagos lawyer, Barrister Edoka Dox Onyeke, the bank, while denying the claim of Obieri, alleged that prior to his participation in liquidation of his own company, Summit Capital and Asset Management Limited, he was the majority shareholder and alter ego of the company.

The Trustbond Mortgage Bank denied any role in relation to the advancement or grant of any loan facilities in excess of the sum of N845.6 million by the plaintiff ‘s company to members of staff of

Intercontinental Bank, particularly as it relates to the reference made by the plaintiff to the meeting of his company’s Board of Directors which did not deliberate on any agenda in relation to the loans granted by his company to members of staff of Intercontinental bank Plc.

The Trustbond alleged further that when it applied to the CAC for documentation filed by the liquidator appointed by Obieri’s company to carry out the voluntary wound up of the plaintiff’s company ,Summit

It was also said that the liquidation of Summit Capital and Asset Management Limited did not follow the due process of law as claimed by Obieri.

The Trustbond averred that having failed to persuade Obieri to see the severity and consequences of his action, which led to a monumental loss of the sum of N983,633,559.49 being the sum owed the Trustbond Mortgage Bank by his liquidated company as at March 27, 2018, it was constrained to lodge a formal complaint with the EFCC in a petition dated December 14, 2017,complaining about the act of criminal misfeasance and fraudulent misrepresentation in the statement of asset and liabilities filed with CAC.

Consequently, the mortgage Bank is counter-claiming in the sum of N983, 633,559.42k, N5 million as general damages and N5 million as cost of defending its legal action.