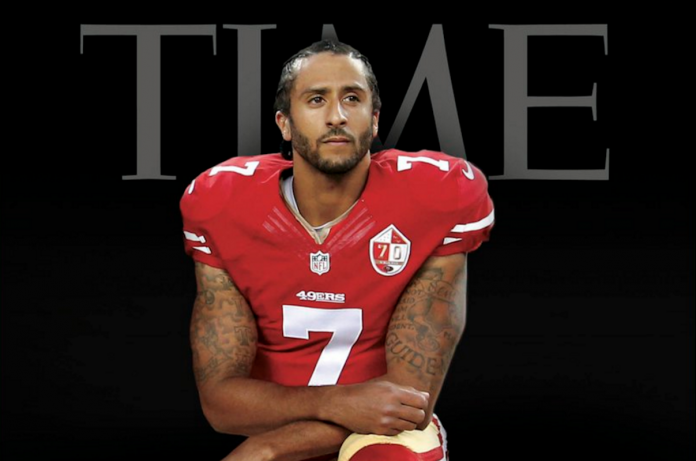 We began last week the inspiring story of an inadvertently polarising young man in a country divided by humanity’s inability to manage its diversity: the subscript and significance of pro-American football star, Colin Kaepernick, incensed by the brutalities prevalent in his so-called advanced society…. Let us continue:

Of course, President Trump characteristically jumped into the fiasco, calling players who joined Kaepernick in refusing to stand for the national anthem, “sons of bitches”. A polarising president confronts a divisive star player – it was a Hollywood script undergoing rapid rewrite sessions!

Several famous voices took sides – basketball stars, Hollywood actors, NFL players, managers and fans – the citizenry also had their say. The classic retort was from Colin Kaepernick’s mum, Teresa. She tweeted: “I guess that makes me a proud bitch”.

Invariably, you cannot challenge the status quo – even the murderous rungs – and not feel the keen brunt of recompense. Here, we phlegmatically call it “corruption fighting back”. Well, the system threw Kaepernick under the bus… actually, he was viciously kicked under a train! In March, 2017, he opted out of his mega contract with San Francisco 49ers – at 29. And no club owner was willing to take him on, not even when most managers expressed high regard for his prodigious talent.

Yet, the spirit of the brave remains overpowering in Kaepernick. He now fronts a campaign, ‘Know Your Rights’, and gives thousands of dollars to various charities and projects across North America…hoping to go as high as $1m (approximately N360m) a year.

Today, Colin Kaepernick has rekindled hope and anxiety amongst the American people that a Martin Luther King Jnr. may return…a possibility that is both inspirational and insidious. Perhaps his motives were misconstrued by many; yet, just as many also appreciate his sacrifice, sincerity and symbolism.

The young man’s invigorating influence – for good or bad – is sharply remodelled in early September’s release of advertising materials commemorating the 30th year of American giant sportswear makers, Nike. The lightening rod igniting a resurgence of the Kaepernick debate and cult-following was Nike’s decision to use the image and lexicon of the “jobless” footballer as the face of its epochal celebrations, alongside stars like Serena Williams, Odell Beckham, etc.

The controversial black and white Nike advert has a full face of Kaepernick with these cryptic words running across: “Believe in something. Even if it means sacrificing everything”. Internet simply exploded!

Few statements are as enigmatic – aptly describing the trauma, travails and triumph of an agile young man pushed to the sidelines because of his convictions, his protests against social injustice. His critics insist there should be a clear gap between advocacy and patriotism – that the flag and anthem epitomise the soul and spirit of America, and thus must be venerated. On the other hand, the supporters of Kaepernick’s creed believe the two totems of patriotism and national pride were etched in sacrifice, honour, equality, justice, inalienable rights, civic responsibility and good conscience… and therefore should not be tainted by acts and voices capable of defecating on those virtues.

Nike has (deliberately?) ignited a resurgence of Kaepernick bashing and hailing with its bold and risky support for the business administration graduate of University of Nevada. Angry posts, memes and videos have assailed the internet with images of people burning their Nike shoes, or ‘gashing’ their socks – in protest. However – and this is telling – huge numbers of contrary posts, memes and videos, according to reports, have equally stormed the cyberspace, poking fun, and vexing the anti-Nike protesters to no end. This shows clearly that in the dynamics of brand leveraging and marketing communication, the billion-dollar global brand has hit a bull’s-eye. The publicity is intensely viral. In the short run, the loss of Nike merchandise (already purchased by irate users, by the way) can easily be recouped when tempers simmer, and other distractions take front row. Yet, destroyed items have to be replaced, sooner or later. Nike will almost certainly still be around to “just do it”!

In all these, there is a clear and present reminder: the stubborn consequence of Kaepernick’s actions, and the audacity that propelled him to “take a knee” against police brutality of African Americans – and by extension, the lethargy of the larger American society to broad issues of social injustice, racial resentment and demonisation of diversity.

Meanwhile, reports have it that part of the Nike deal will not only provide funding for Kaepernick’s charity, ‘Know Your Rights’, but also enable a global brand the platform to take a prominent and deliberate public stand against issues that divide and diminish human capacity to live in harmony and love.

Coming home, we must ask ourselves – among our stars, iconic or popular – do we have volunteers who can ‘home-train’ the spirit and symbolism of Kaepernick? Are there brands and entities willing to toe, if not ape, the brilliantly pugnacious  interventions of Nike in the Nigerian climate?

Of course, we have massive debilitating challenges…our numerous social, political and economic dysfunctions stink of doomsday inevitability. A list too long and demoralising… yet the invigorating effect of deliberate, purposeful, selfless and substantial investment of star-power activism in selected areas of our gross inadequacies, can, possibly, galvanise our huge army of youth, and provoke some semblance of clarity and courage in our loafish leaders.

I am careful here not to fall into the sin of demonising our own otherwise valiant compatriots while lionising the efforts of foreigners in far-flung climes. It is nonetheless important that, in the inimitable words of Chinua Achebe, we observe critically “when the rain started beating us”. And speak truth to our selves – even as we do so to power!

You do not have to headline a road protest against government or poor governance (the difference is pretty vague) when miscreants can easily hijack it and unleash their own agenda! You may or may not build schools all over Africa, when your own country has barely 59% literacy rate, according to UNESCO 2015 report (Seychelles and Equitorial Guinea who may welcome your continental generosity have 95% literacy rates; South Africa 94%, Mauritius 90%, Burundi, Zimbabwe, Zambia, Namibia, Botswana and Swaziland are in the 80s).

Your aquisition of private jets is, surely, your God-endowed rights; but your legacy will run deeper into recesses of your country’s crevices where people are suffocating under police brutality and state-driven injustice…when all you have to do is stand firm (or kneel), speak out and controvert irresponsible power.