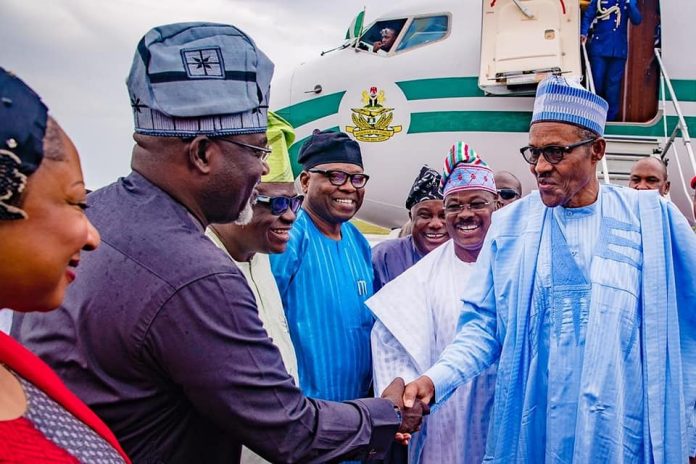 President Muhammadu Buhari on Tuesday attended the grand rally of the ruling All Progressives Congress (APC) in Oshogbo, where he said the state must be retained by the party.

He appealed to the people not to allow darkness to take over the State of Osun.

Buhari said that the people should come out massively to vote for APC and not allow corrupt people to have their way in the state.

The President restated that APC had zero tolerance for corruption and that Nigerians would continue to kick corrupt leaders out of the polity.

“Nigeria must be free of corrupt leaders,’’ he said as he assured the people of the government’s commitment to completing all projects abandoned by previous administration in the state.

Aside the continuation of road projects in the state, he said that the federal government was constructing a transmission line and sub-station to boost electricity supply in the state.

Praising Governor Rauf Aregbesola for the strides made in infrastructure development, especially in the area of education, healthcare, security and housing, Buhari assured the people that a vote for APC candidate, Mr Gboyega Oyetala, was a vote for sustenance of development.

He said he was in the State of Osun for the good of the people.

President Buhari said Oyetola was ready to work and thanked the people for their hospitality, warmth, friendliness and respect they accorded to the leaders of the party.

Earlier in his speech, the National Chairman of APC, Comrade Adams Oshiomhole, expressed gratitude to Buhari for assisting to mobilise the people to vote for the party.

“President Buhari’s presence in Oshogbo is not to retain what APC already had but to assure Osun people of the readiness to consolidate and build more on what the people already have,’’ he explained.

Oshiomhole explained that the eight years of APC’s administration had brought many changes and changed the face of Osogbo and the State of Osun.

Giving the assurance that APC’s candidate, Oyetola, was ready to work, he said: “Governorship is not for apprentices but for those who want and ready to work.’’

“This is not the era for those who will want to engage in familiarisation tours but somebody who knows the terrain and ready to work.

“These are trying times, we need people who are competent, people who can manage finances, and those who can also generate revenue.’’

Describing Oyetola as more suitable for the job, Oshiomhole said the candidate would continue with the people-oriented, people-driven and people-support programmes of Aregbesola.

He said that APC was celebrating Osun State where a level playing group had been created for children of all classes.

He said the one-day –a-meal programme for children in schools adopted by Osun State had benefitted the children of the “poorest workers and poorest farmers’’.

Many governors as well as the Deputy Speaker of the House of Representatives, Yusuf Lasun, attended the rally. (NAN)