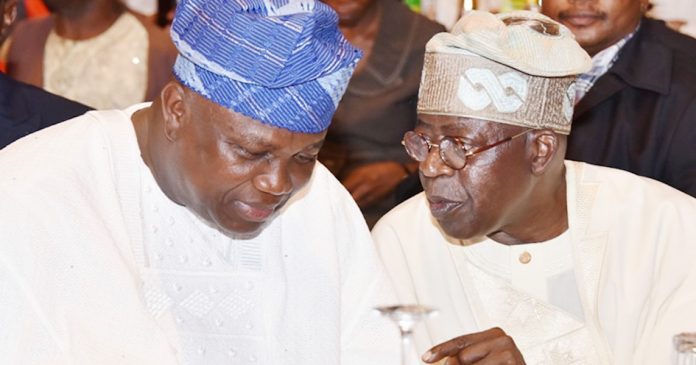 By Gboyega Akinsanmi and Segun James

Despite the hard stance of the National Leader of All Progressives Congress (APC), Senator Bola Tinubu, on the re-election bid of Lagos State Governor, Mr. Akinwunmi Ambode, the presidency yesterday intensified its intervention to broker a peace deal between the national leader and his embattled political godson.

While the push for peace deal was underway, Ambode’s main challenger and the Managing Director of Lagos State Property Development Corporation (LSPDC), Mr. Babajide Sanwo-Olu, formally declared his intention to contest the 2019 governorship election in the state on the platform of the APC.

Multiple APC chieftains, who spoke with THISDAY in confidence yesterday, gave insights into the sustained effort of the presidency and APC National Secretariat to end the Ambode-Tinubu impasse at the weekend, claiming that Tinubu’s hard stance slowed down the process of sealing a peace deal between the two.

Since penultimate Sunday, there has been controversy over the political future of Ambode immediately after Sanwo-Olu and former Lagos State Commissioner for Works and Infrastructure, Dr. Obafemi Hamzat obtained nomination forms to challenge Ambode in the APC primaries scheduled to hold on September 27.

Just after obtaining the nomination form, the Mandate Movement, a political group loyal to the APC national leader, promptly endorsed Sanwo-Olu, the state’s Commissioner for Establishment, Training and Pensions under the administration of former Governor Babatunde Fashola (SAN), to contest the 2019 governorship poll.

Subsequently, Conference 57, a forum of Chairmen of 20 Local Government Areas (LGAs) as well as 37 Local Council Development Areas (LCDAs) in the state, signed Sanwo-Olu’s governorship nomination form, claiming that they were acting on the instruction of the APC national leader.

Giving insight into the peace meetings held at the weekend, an associate of the APC leader and a senator in the seventh National Assembly acknowledged that Tinubu had not agreed to support Ambode’s second term bid despite series of intervention by the president, his wife and the vice president.

He observed that the matter “is complex. The issue is not about the APC leader alone. Ambode has problem with the political class in the state. They alleged that Ambode wanted to hijack Alimosho from Osun State Governor, Mr. Rauf Aregbesola. They accused him of setting up his own political structure.”

Apart from these allegations, according to the former senator, the political class alleged that the governor had changed a lot of policies in the state that the APC leader considered as the treasured legacies he left behind, having served the state between 1999 and 2007.

Despite the entrenched resentment in the camp of the APC national leader, he disclosed, “The vice president is working hard to resolve it. Ambode has problem with the political class in the state. Asiwaju has not agreed to support Ambode’s re-election bid.

“Tinubu’s position is that all aspirants should go the primaries. He believes it is the beauty of democracy that all the aspirants face the primaries. But it is not impossible to resolve the issues between Asiwaju and Ambode. With the way things are presently, it appears only the president can prevail upon Asiwaju to soft pedal.

“The Vice President, Prof. Yemi Osinbajo, still met them on Saturday. He will likely meet them again early this week to resolve the differences between the parties. They are still talking. But the president can end the impasse.”

Another party chieftain, who had served in the State Executive Council between 2003 and 2011, acknowledged the sustained peace meetings, which according to him, was facilitated by the president, but handled by the vice president.

Even though Tinubu had not yielded to the presidential intervention, the chieftain said that the Ambode-Tinubu rift had got to the point of reconciliation. The intervention of President Buhari and his wife, Aisha, he said, would eventually yield meaningful result.

According to the source, “There is fear that Ambode may fight back if he eventually clinches the APC ticket. The party leaders believe he does not forgive. That is why it is difficult to resolve the issues. In 2014, the Mandate did not support him. It supported Hamzat then. It was Asiwaju that persuaded the leaders of the movement to support Ambode.

“But Ambode never forgave them. He fought them back. Already, the whole issue has got to the point of reconciliation. The Mandate is just leveraging on Asiwaju’s displeasure against Ambode to fight back. But they will likely call him this week and read the riot act to him. It will be resolved most likely this week. They just want to teach Ambode some lessons and humble him.”

A cabinet member last night, explained the complex situations threatening the possibility of a peace deal in the Ambode-Tinubu rift, which he ascribed to Ambode’s heinous sins against some entrenched political leaders in the state and Buhari’s weak approach to facilitating reconciliation between the governor and his political godfather.

At the weekend, for instance, he disclosed that Oshiomhole was in Lagos with a clear mission “to resolve the rift. But he could not. Oshiomhole seems to have backed out from discussion after Asiwaju explained what happened to him.”

He noted that the president could “have personally mediated in the conflict and reconciled the parties. The president has actually listened to Asiwaju on this matter. But he was not firm about it. Rather than prevailing on Asiwaju personally, Buhari mandated Osinbajo and Oshiomhole to continue with the discussion.

“But the vice president met Asiwaju Saturday night. He is really mounting pressure on Asiwaju to reconsider. Authoritatively, till late on Saturday, Osinbajo was with Asiwaju, appealing to him to allow Ambode enjoy the privilege of first refusal.

“Even though it seems unlikely to resolve it, there is nothing impossible with God. The good thing is that engagement is ongoing. Resolution is not foreclosed, though seems unlikely considering political dynamics in the state.”

Despite series of high-powered peace meeting going on at different levels, Sanwo-Olu formally announced his intention to contest the 2019 governorship election in the state on the platform of the APC yesterday at the City Hall, Lagos Island.

The aspirant said he had a plan to make Lagos the greatest, most vibrant city on the continent, taking its rightful place in the comity of states around the globe.

He said, “I have a vision for a Lagos with modern and affordable transport system, impeccable public health facilities, world class educational institutions, where we succeed in educating and skilling our youth, especially our children.

“A vision for a Lagos where our children are educated and our youth are highly-skilled, healthy, free of hunger, illiteracy, disease and destitution. There’s a lot of work to be done to achieve the Lagos of our dream.”

He, therefore, pledged to be a good party man and run an inclusive government while he commended Ambode’s immediate predecessor, Mr. Babatunde Fashola, for his efforts while leading the state between 2007 and 2015.