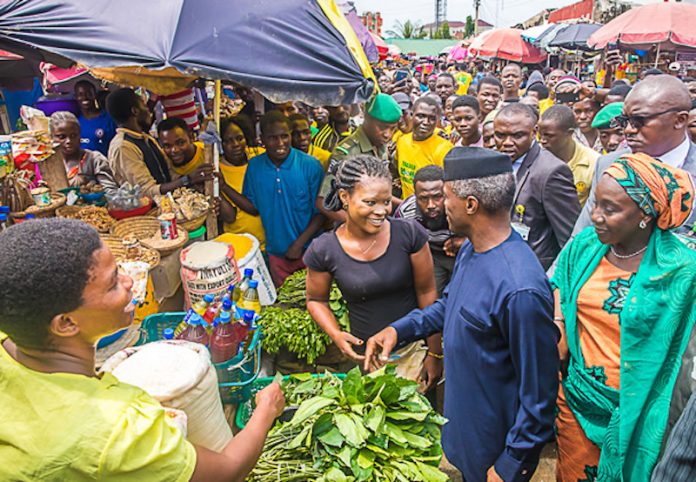 Traders in the popular Watt Market in Calabar, Cross River State on Tuesday commended the federal government for introducing the N10, 000 collateral-free loans under the Trader-Moni scheme.

The elated traders lauded the scheme when Vice-President Yemi Osinbajo unveiled the programme in Cross River State, where several traders were given N10, 000 loan each to be paid back in six months, and to get more when they pay back on time.

The vice-president supervised the disbursement of the N10, 000 collateral-free loan to traders which was made available by the Nigeria Social Insurance Trust Fund in collaboration with the Bank of Industry (BoI).

An elated trader, Atim Ededem said: “I’m very happy to have registered, and this is one of the most visible signs of government that we have seen. I like the initiative but some of the people who are not traders in Watt Market are also registering.

“So, I think in future, government should go through our market unions and possibly double the money. On the whole, this is a very welcome development.”

Another trader, Joy Unasi, said: “I think it is a very good development and will go a long way in ameliorating our plight. It is better than collecting money from conventional sources where the interest will make it discouraging.

Another beneficiary, Godwin Ikpot, said: “At first, I thought it is one of these fraudulent schemes and did not believe it until when the vice-president came to our market. This is the first time in my life that I have seen the vice president, and any doubt I had about the trader-moni scheme has been dashed.

“In fact as I speak to you, I registered after the vice president left so this is a very good development and I think for some businesses like mine, the government should increase the money for us because we would be able to pay back.”