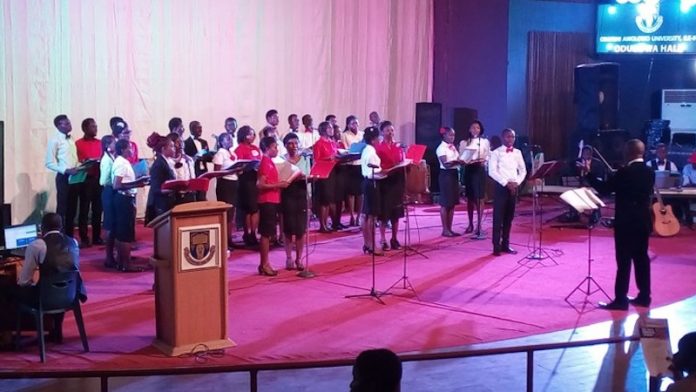 Professor of Music and Performative Musicology, Olusanjo Matthew Abayomi, has stressed the need for the academia especially Nigerian musicologists to complement the efforts of musicians in the country through research works related to social, religious, educational, economic, political and moral issues.

Abayomi who made this known, recently, in his inaugural lecture series 325 titled, ‘Seeing through Life’s Cloudy Domain: Navigating the Chemistry of man, music and culture’ of Obafemi Awolowo University, Ile-Ife, said the move will bring about a synergy between the works of the musicians (town ) and the academia (gown).

Music he said, occupies a prominent domain in human life, adding that it has the capacity to control people’s emotion and actions in such a way that they become either violent and destructive or peaceful.

According to him, “Human beings cannot be removed from their culture, it is very important, it is the motherboard of every activity irrespective of the religion. If culture is removed from somebody, then that person is dead. Most of the conflicts that also ensue in communities, cities and countries of the world have their signatures in songs especially the proverbial ones.”

The content of such songs , the don affirmed that if not attended to can bring about conflicts that ordinarily would have been amicably settled to sometimes snowball to wars and most often to genocide.

Aside the entertainment people derive from music, the Professor of Music said it is a coin of entwined dark and bright sides, adding, “ironically , musicians being social specialists, fit or shift into any of the two sides without much ado. Sometimes, these musicians, based on the roles they play in the society , are regarded as prophets. This is because they could see through the dust of events in their communities and prognosis of the future.”

He emphasised on contemporary musicians who have used their music to reflect on happenings in Nigeria, saying that they become chroniclers of events, recreating the history and culture of their people, commenting on aspects of societal values that have diverged from historical reports and suggesting ways by which society could be restored to the normal order.

“For instance, the late Hubert Ogunde, often regarded as the pioneer of Nigerian folk opera, in his song, tried to promote interest of his people’s traditional culture. He was able to perceive the political climate of the time, and as a philosopher, he was able to forecast the likely outcome of the attitude of the Yoruba political leaders at that time, the manifestation of which is still steering us in the face.

Also the late Fela Anikulapo Kuti, was personally touched by the magnitude of the injustice, brutality and corruption perpetrated by the military, released the album ‘Zombie’, which sent the junta into frenzy and made them plot so many ways to apprehend him.”

Abayomi who stressed the need for government to promote culture noted, “as an important social phenomenon, music serves as a lens by which elements of a any culture could be readily discerned. The potency of music as an element of culture and by which culture could be understood is domiciled in its tendency for promoting and propagating culture in a more accommodating and acceptable manner.”