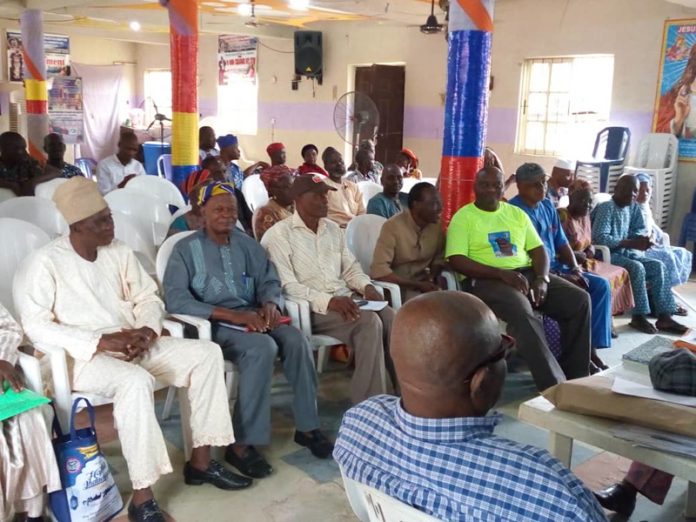 A former Local Government Chairman of Oshodi/Isolo Local Government, Hon. Afeez Ipesa-Balogun, was on Tuesday welled up in tears of joy at a meeting with community leaders in the council area.

The All Progressives Congress (APC) House of Representatives aspirant, met with the community leaders under the aegis of Community Development Committee (CDC), the umbrella body of all Community Development Associations (CDAs) in the council area, to formally inform them of his intention and to seek their support in the build up to his party’s coming primaries for the ticket of Oshodi/Isolo Federal Constituency 1.

Apesa was overwhelmed with the lavish praises poured on him by the people for what they termed his record of outstanding performance, humility, accessibility, maturity and friendly disposition to all and sundry for the period he was chairman of the Local Government, which they have not find in any other that has occupied the office since he vacated it.

The community leaders recalled before a highly enthused Ipesa-Balogun, in a celebration of sort, how apart from his landmark projects and compassionate disposition to all and sundry during his tenure as Chairman of the council area, he strengthened and encouraged the activities of CDAs across the Local Government Area by building and supporting them in all areas.

According to the CDC members, the former council chairman introduced and institutionalised a monthly imprest grant to the CDC to run its operations, provided space and funded the construction of a Community House, comprising a hall and offices for the CDC to the level it has remained since he left office 7years ago and stood out as the first Council Chairman in the State to compensate CDAs in the council area, when he released N3.8 million to them for successfully monitoring and supervising Local Government projects across the area under construction to completion.

Also, the community leaders, who pledged to give him all the necessary support to ensure that he wins the 2019 election into the House of Representatives once he gets his party’s ticket, recalled that he was the first Council Chairman in the State to provide a CDC with an official car, stating that the provision of that vehicle by him for them in Oshodi/Isolo Local Government Area made the apex body of all CDAs in the State, the Lagos State Community Development (Advisory) Council, to appeal to all other Council and LCDA Chairmen in the State to provide official vehicles for their CDCs.

Women members of the CDC present also added their voice, stating that under the former Chairman, members of the National Council of Women Societies (NCWS), Nigeria, Oshodi/Isolo Local Government chapter, were always sponsored by him to their Annual National Convention in Abuja but that it has since stopped as they are not able to attend the Convention again since he left office.

The CDC members were unanimous in their opinion about Ipesa-Balogun, confident that he will not only make a good representative of Oshodi/Isolo Federal Constituency 1, if he gets the APC ticket and wins the election, he will restore and surpass the glory and joy of the Constituency’s past representations since the advent of party politics in 1999.

The aspirant, who was surprised at the encomiums poured on him, was emotionally overwhelmed and only managed as he struggled in between tears of joy to thank the leaders, promising to mobilise funds within a space of time, if elected to ensure the completion of the CDC Community House to a befitting status.