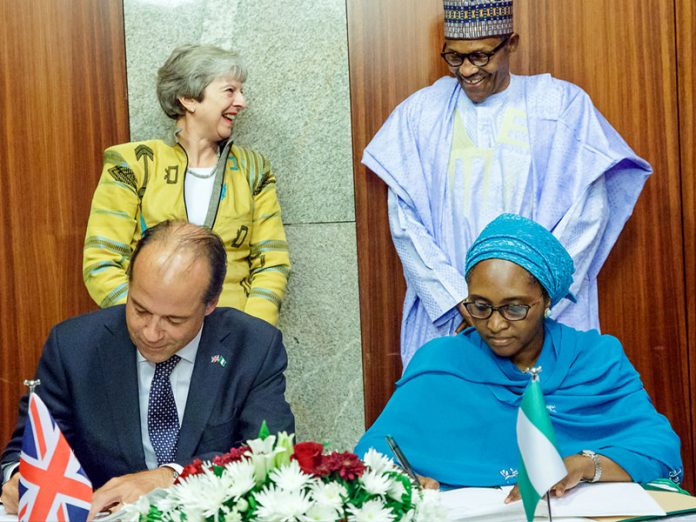 May who arrived the Presidential Villa in company of some British officials at 1pm, was received by some top government officials.

After the meeting which lasted for about 50 minutes, there was no usual press briefing by Buhari and May but the Minister of Foreign Affairs, Geoffrey Onyeama, told journalists that two pacts were signed by the two countries.

According to him, the first agreement bordered on defence and security which he said was signed by the security advisers of the two countries while the second is meant to boost the economies of both countries.

According to him, the security and defence pact covers all aspects of security challenges confronting Nigeria including training, policing, civil policing, human rights and close cooperation between the two countries.

Furthermore, Onyema said the second pact aimed at guaranteeing the prosperity of Nigeria and Britain by leveraging on areas where the two countries have competitive advantages including prospective business investments in Nigeria.

He also said the economic pact would involve all stakeholders particularly in view of the planned exit of the United Kingdom from the European Union (EU) in 2019, saying with Brexit, the United Kingdom would be free to engage in bilateral relations, a move which he said would also be beneficial to Nigeria.

May, who has been on tour of three African nations including Nigeria to boost alternative business relations that will cushion the effect of Brexit next year, left Abuja for Lagos.