The Bayelsa State Governor, Mr. Seriake Dickson and a former Governor of Delta State, Chief James Ibori, at the weekend met with the people of Ogboin and Amassoma, Southern Ijaw, over last weekâ€™s killings involving some protesters at the Niger Delta University (NDU).

Both leaders told their audience, including traditional rulers, elders, youth leaders and management of the NDU that the meeting was necessitated by the recent happenings in the area in which some persons lost their lives during clashes with security operatives deployed to keep the peace in the institution.
Moves to resolve the crisis came even as the Ijaw Youth Council (IYC), accused some politicians in the Niger Delta of stoking the crisis for their political gains.
While condemning the killings, Tare Porri, the Chairman, Central Zone of the IYC told journalists yesterday at the national headquarters of the body in Yenagoa that the youths were angry that external influences were inducing persons to heighten tensions in the area.

â€œLet them stop. They canâ€™t even raise their heads in their states. They should stop promoting crises in this state. Ijaw youths will not tolerate any leader who promotes problems in Bayelsa.
â€œThey are not resident in Bayelsa, these young people that died would have been governors and presidents in the future. They have used our commonwealth to send their children to study abroad, yet they keep promoting crisis here,â€ he said.
Meanwhile, at the governorâ€™s meeting which held at the Diepreye Alaimeyeseigha Memorial Banquet Hall in Yenagoa, Dickson who had earlier met with the Governing Board of the university at the Government House, Onopa, said he never ordered the killings, despite all the provocation on the security operatives.
While noting that he remains one with the Amassoma people, in spite of the fact that the issue had been highly politicised, he insisted that aside the late Alamieyeseigha, no other governor had done the much he (Dickson) had for the people of the area.
â€œMy heart bleeds that because these are government decisions that are largely in the best interest of the people in the long run, because the survival of that school is more important, the survival of our state is more important. l am looking at the bigger picture, how to sustain the school and the state,â€ he said.
Dickson condemned the attack on the police and regretted the ensuing deaths, describing it as sad and unfortunate, but avoidable.

After a minute silence was observed for the persons who lost their lives, the government promised to send a delegation to visit the bereaved families, pick the medical bills of injured victims and ensure a befitting burial for the dead.
Dickson said a committee would be set up to examine the immediate and remote causes of the disturbance while he would work closely with the security agencies to ensure the release of those still in detention.
But the governor maintained that the protest was sponsored by people who were bent on making Bayelsa ungovernable, but regretted that those who took part in the demonstration and attempted to stop the police from doing their job were deceived by some politicians.
â€œI hear that some politicians are saying that there are plans to relocate the school from Amassoma. And people are believing that. Itâ€™s very said. Itâ€™s not true. Apart from Alamieyeseigha who started that school , no other governor added a new block until I became governor,â€ Dickson added.
He said many of those who spearheaded the protest were not workers of the university, stressing that they looted computers, televisions and other assets of the institution.

In his comments, Ibori noted that in these trying times, the Ammasoma people should support the governor to succeed.
The former governor said many times, leaders take decisions with very clear conscience which would benefit the society, but can only pray that those decisions turn out well.
â€œIn governance, sometimes you face very tough challenges, especially when it involves lives. As a leader you take decisions. Some of these decisions are unpalatable. At the end of the day, you pray to God because you are doing it for the good of your people,â€ Ibori said.
Dickson had since November last year begun reforms to rid the state civil service of overaged workers, fraudulent credentials and suspicious promotions, resulting in the stoppage of salaries of several persons working in the state civil service. 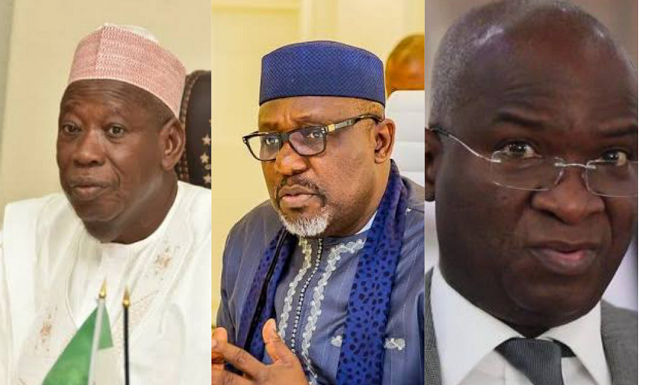