All things being equal, President Muhammadu Buhari will on December 1 present the 2017 budget before a joint session of the National Assembly, the Senate disclosed wednesday.

This disclosure was made by the Minority Leader, Godswill Akpabio, at the conclusion of the debate on 2017-2019 Medium Term Expenditure Framework (MTEF) and Fiscal Strategy Paper (FSP) wednesday.

Taking into cognisance the vehement criticism of the document by senators as well as submissions by senators that the document should again be returned to the executive, Akpabio said doing so would be counter productive in view of the planned presentation of 2017 budget on December 1.

Akpabio therefore urged his colleagues to rather send the document to relevant committees with its flaws and leave such committees with the task of addressing the flaws.

“We can see that we don’t have a perfect document in our hands but of course we are looking at assumptions and assumptions may not necessarily be correct. I want to suggest that we send it to the committee. Of course, the committee will invite the relevant agencies and ministries of government. And they will come up with a more realistic MTEF/FSP because I believe also that looking at the date that this was submitted to the Senate – it was submitted to the Senate on the 4th of October – and we are debating it today on the 22nd (of November). So, a lot of indices must have changed.

“Yesterday, you (Saraki) made reference to the fact that the president may be coming to the chambers to submit and read the 2017 budget on December 1. If that is the case and we send this back now and wait for it to come and debate it, it means that we will not be able to meet that deadline. But if we send it to the committee level, they may come up with something within the next three days that will be more realistic.

“So, my appeal will be that the committee members should take into cognisance all the submissions and observations made today so that we can come up with a more realistic MTEF and FSP,” Akpabio said.

However, during the debate on MTEF and FSP yesterday, there was a consensus among senators that the document was flawed as they vehemently condemned the document, describing it as a compedium of fraud, dishonesty, lies, deceit and one which lacked the basis to project the 2017 fiscal year.

Leading debate on the document yesterday, Deputy Senate Leader, Bala Ibn Na’Allah, described it a statutory document which articulated government revenue and spending plan as well as its fiscal policy objective over a stated period.

Na’Allah said presentation of the document which was in accordance with Section 11 of Fiscal Responsibility Act (FRA) 2007, consisted of proposed $42.5 oil benchmark, projected 3.02 per cent gross domestic product (GDP) growth in 2017 and moderated inflation rate of 12.92 per cent.
He said the GDP growth would be driven by strong performance in agriculture, wholesale and retail, construction and real estate sectors among others.

Na’Allah also said the 2017 budget would be guided by six principles which he listed as realism, credibility, allocative strategy, prioritisation, transparency and accountability and social safety nets.
In his contribution, Senator Dino Melaye (Kogi West), recalled how Central Bank of Nigeria (CBN) last Monday admitted that the nation was plunged into recession by Nigeria’s huge debt.

Melaye who demanded the performance of 2016 to 2018 MTEF/FSP also criticised the proposed N290 to $1 exchange rate in the MTEF, describing it as a factual lie moreso that the official exchange rate is N305 to $1 and over N400 to $1 in the parallel market.

Melaye said: “If we speak the truth, we will die, if we lie, we will die. So, I have chosen to speak the truth and die. Mr. President, just this morning,The Punch Newspaper carried on its front page boldly an assertion from the CBN that huge debt is responsible for recession and there is no other factual factor responsible for recession than our huge debts. I want to say this document that I have before me, this MTEF proposal and projections of the 2017 to 2019, is a lie. This document is not truthful. It is not honest. It is not transparent and It is not factual.”
Also speaking, Senator Usman Nafada (Gombe North), while speaking on imminent consequences of the flawed document, noted that the trouble with the current 2016 budget might have been laid by the 2016-2018 MTEF.

Nafada took on Senator Ahmad Sani (Zamfara Central) who had claimed that nothing was wrong with the document and that within three months, the economy could recover. Nafada challenged him to “tell us the magic you want to do in three months.” Sani had claimed that he had a masters degree in Economics.
In the same vein, Senator Mohammed Hassan (Yobe South) said the 2017 projection was not realistic as he argued that there was no basis for the projections in MTEF.

Hassan also lamented lack of co-ordination between the fiscal and monetary policies of the government, pointing out that a situation where the government keeps borrowing while banking is unattractive is not healthy for the economy.

In his submission, Senator Sam Anyanwu (Imo East) lamented a situation where oil pipelines are being destroyed in Niger Delta without a decisive attempt to stop the trend.

On the MTEF, Anyanwu did not mince words to deride it, saying “there is no document before us.”
On his part, Senator Joshua Lidani (Gombe South) said the document lacked credibility, noting that production volume had been on a progressive decline without any political will from the government to address it.
He recalled how the late President Umaru Yar’Adua confronted a similar situation in the past and nipped it in the bud by coming up with amnesty for militants as he lamented that despite the claim of diversification, nothing has been done by the government to add value to the agricultural sector.

On his part, Senator Adeola Olamilekan (Lagos West), attacked the federal government’s economic team, saying it is in disarray.

Others who also spoke on the document were Senators John Enoh (Cross River Central); Ahmad Lawan (Yobe North), Emmanuel Paulker (Bayelsa Central) and Kabiru Gaya (Kano South).
In his remark, Senate President Bukola Saraki, echoed his colleagues that the projections were not realistic but tasked the Committees on Approprition and Finance to dust the MTEF and return it a refined document.

“Like some of our distinguished colleagues said, our responsibility is to work on it and use our capacity to do the right thing. We have our Committees on Appropriation and Finance that should not just take anything from the executive, sign it and return it (verbatim). If it means that we have to rehearsh it, look at it again, turn it around and do what is right, then, that is our responsibility.

“I think that is just the way to go rather than to just take a document from the executive and return the same to it. It is clear from what was submitted today that it will not work like that this time around,” Saraki said.
However, THISDAY learnt that the decision to debate the MTEF was taken at the executive session held by the senators before yesterday’s plenary.

It was learnt that the Senate resolved to debate the document in view of perceived indifference of the government towards the return of the document to it in the last two weeks.

The Senate had returned the document to the executive earlier in the month, alleging that it was empty, shallow and asked the government to make the document more valuable. But rather than address the issues raised by the Senate, the presidency looks the other way.

editor - September 29, 2020 1:51 am
0
BY REUBEN ABATI I was very skeptical when the current leadership of Organized Labour in Nigeria objected to the decision of the Federal Government to... 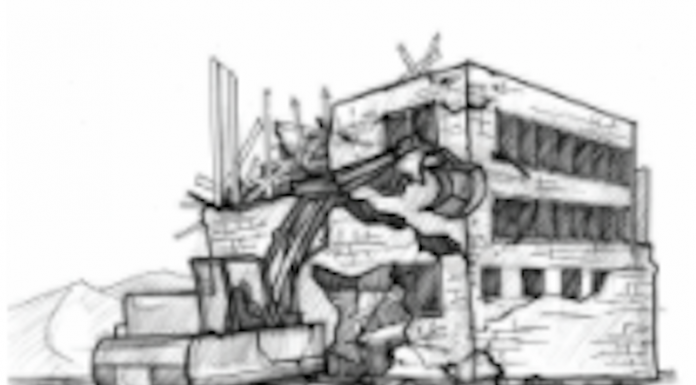 BEYOND THE ABA BUILDING COLLAPSE