Cross River State Governor, Senator Ben Ayade’s investment drive has received a further boost with Dana Group, a consortium of Indian investors ready to partner the state in the areas of airline and pharmaceuticals.

The partnership which will lead to the setting up of an airline to be known as Cally Air, involves Dana Group oversee the management of the state’s airline as well as the Calabar Pharmaceutical Company (CalaPhar).

Disclosing this in Calabar when he led the Managing Director and Chief Executive Officer of the Dana Group, Mr. Jackies Hartmani, to the site of the Calabar Pharmaceutical Company, currently under construction, Governor Ayade said Cross River was creating new platforms, new business opportunities that would open a fresh horizon for young people to exploit.

The governor who assured Cross Riverians of a brighter further, despite the current recession said: “Cross River State expects a lot to happen, as there is a lot of energy, steam, excitement in the air because Cross River State will definitely make a difference in the face of this recession.”

He stressed that at a time such as this, “only quality idea such as the one that is giving birth to airline and pharmaceutical company that can survive any society that is challenged and threatened by economic downturn.”

According to him, “That is when the intellect and the best of everybody comes out and I think Nigerians will see this challenge as a great opportunity to reinvent themselves. This time is an opportunity for us to think and go beyond the scope of our normal lifestyle, to find from the depth of our intellect, capacity and knowledge, to forge a new prosperity, new vision, focus on reconstructing a new economy, new lifestyle, new consumption pattern that can take Nigeria out of the woods.”

On the new partnership between the state and Dana Group, especially as regards the pharmaceutical company, the governor maintained that Cross River State would become the hub for the manufacturing of drugs in the whole of the South-south region of the country and Cameroun.
According to him, “the original intention and spirit of this factory is to provide the drugs demand for the proposed Cross River State Health Insurance Scheme. As you are well aware, the Health Insurance Bill has been passed by the House of Assembly which I am going to be signing into law by Tuesday.” Ayade further stressed: “The idea therefore is that Cross River State will be having a huge demand for drugs for her citizens who will be covered under the comprehensive insurance scheme.

“It therefore means that we cannot continue to depend on Lagos and imported drugs to be able to support our people, which is why as a government, we conceived the idea of Calabar Pharmaceuticals.”

Continuing, the governor said: “As you are well aware, Dana Pharmaceuticals, one of the outfits of Dana Group of companies is established in pharmaceuticals, so this is a partnership with a giant that is well grounded in the sector.

“So it is important that we get a partner that is a strong industry player in Nigeria, who has good grabs of industry standards.” Speaking further on the partnership, Ayade noted: “We think that this factory will be a complete game changer in the pharmaceutical business. What is critical is that the entire South-south and the whole of South-east, stretching to the western part of Cameroun, stretching to the borders of Northern Nigeria will benefit from this huge investment”

In the same vein, Ayade said the state’s airline which is another major partnership with Dana Group will be up and running in two to three months.

His words: “I am sure that in the next two to three months, you will all see Dana Air flying to Calabar. We have our own state’s aircraft, which Dana has agreed to do a detailed technical study of the aircraft, which is in Aero Contractor’s fleet in Lagos. And as soon as that is done, he will finalise to get the aircraft in the air. Once that is done, it is going to be written completely as “Cally Air. So it will be flying Calabar, Obudu, Lagos and of course, Abuja. We are in a haste to get Cally Air started, so Calabar will have its own airline in partnership with Dana as its technical operator and we have also reach a point where we will be signing up on that deal.” Speaking earlier on the joint partnership between the state and Dana, Jackies Hartmani said: “My company is very impressed with what Ayade is doing to transform the state in terms of investment and we are committed to ensuring the success of the partnership.” 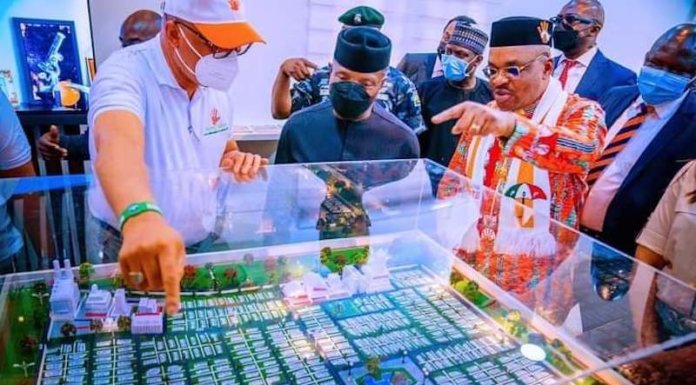