BRAIN DRAIN IN THE HEALTH SECTOR 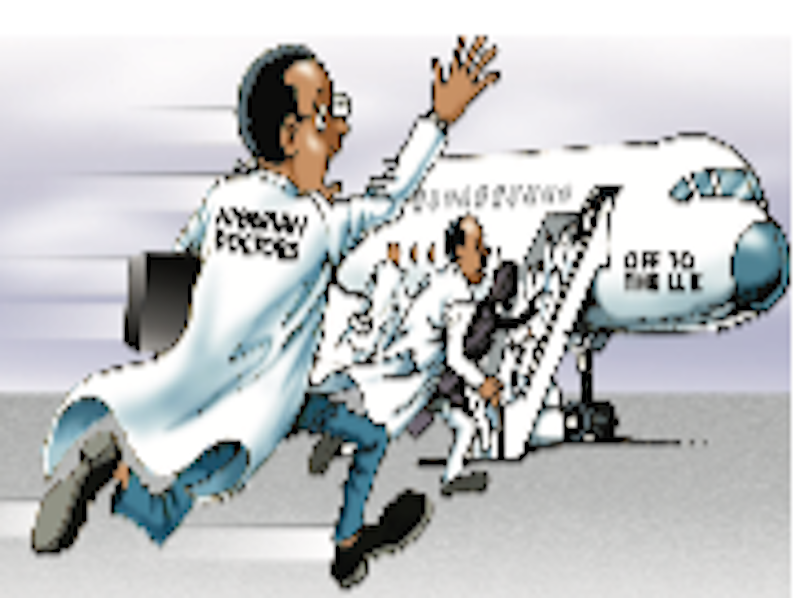 Health Minister, Osagie Ehanire said recently that Nigeria has surplus medical doctors, hence the country is not bothered by those leaving for greener pastures abroad. His Labour and Employment colleague, Chris Ngige has expressed similar sentiment on a number of occasions. But their assertion is not correct. With 24,000 doctors for a population of over 200 million, Nigeria is in dire need of medical doctors. Whereas the World Health Organisation (WHO) recommends that every nation should have one doctor to 600 people, Nigeria now boasts of one for 8,300 people.

To be clear, Nigeria only has 7.5 per cent of the needed medical doctors for its population. To make matters worse, many of the remaining doctors in the country are planning to join their colleagues who have migrated abroad for job fulfilment and a better working environment. That many of these medical doctors are products of our tuition-free public universities makes the case pathetic. For context, Nigeria has trained 90,000 medical doctors as of May 2018, according to the immediate past Health Minister, Isaac Adewole. Of that total, 70 per cent have migrated to the United States, United Kingdom, Saudi Arabia and other nations they feel their services are better valued. According to the Nigerian Medical Association (NMA), some 50 doctors migrate from the country every week.

To compound the situation, doctors are not the only health professionals seeking greener pastures abroad. Nurses, medical laboratory practitioners, pharmacists and allied personnel are also leaving the country in droves.  For instance, 57,000 nurses have migrated from Nigeria within the last five years (2017 – 2022) according to the President of the National Association of Nigerian Nurses and Midwives (NANNW), Michael Nnachi.

We consider the mass exodus in the health sector as a national emergency that must be addressed. Incidentally, the two ministers downplaying the issue are medical doctors who should understand what a deficit in health personnel means for a fragile healthcare system like ours. It is bad enough that the nation does not have the recommended number of medical doctors for our population. We cannot afford a further depletion of the remaining few.

As a matter of urgency, the federal government must address the root causes of the migration, chief among which are insecurity, poor incentives, bad working conditions and low funding of the health sector. Nigerian doctors are among the least paid globally, a situation that spurs them to move to countries where they can get better incentives. Till date, Nigeria’s health sector funding still dangles between two and three per cent allocation of the national budget. Even if the entire health sector allocation is released – which is usually not the case – the amount cannot address primary healthcare alone not to mention other areas of the sector. There is an overwhelming pressure on the few doctors remaining in the country. If a doctor in Saudi Arabia sees 40 patients in a month and paid $6,000 at the end of the month, it is only reasonable for a Nigerian doctor who sees over 200 patients in a month and paid less than $500 to think of something else.

The federal government must make the sector lucrative enough to retain and attract doctors. Ehanire and Ngige must first admit that we indeed have a problem. They cannot continue to live in denial of what is so obvious. Nigeria as of today does not have sufficient health practitioners. It is time we addressed the issues fuelling the migration of health workers from our country.