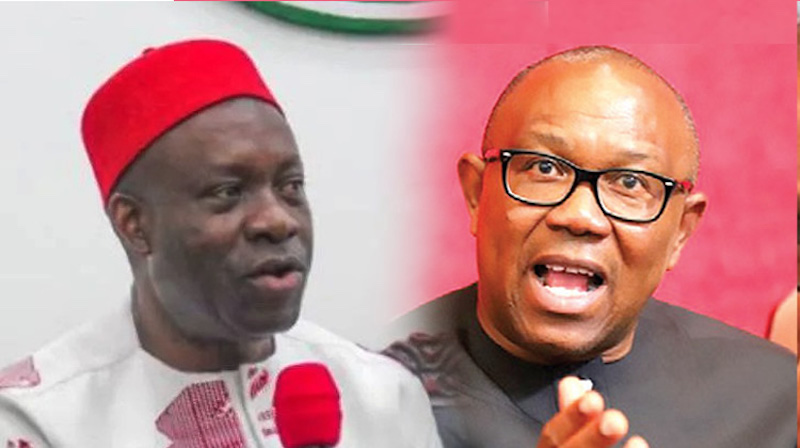 Anambra State governor, Prof Chukwuma Soludo, was in the news recently for his comments on his predecessor and presidential candidate of the Labour Party, Mr Peter Obi. David-Chyddy Eleke interrogates the remarks of both men and also looks at their style of politics.

any people have yet to find the connect between the remark of the Anambra State governor, Prof Chukwuma Soludo on the worth of the investments of his predecessor, the presidential candidate of Labour Party (LP), Mr Peter Obi and how it relates to his 2023 budget, which was actually the focus of the television interview.
In fact, Soludo has been accused of many things, including envy, jealousy, pettiness and others for his remark on Obi. On Thursday last week, Soludo had presented a N260billion 2023 budget estimate, tagged; budget of acceleration to the Anambra State House of Assembly, and on same date, he had settled for an interview to espouse on the budget. He had been asked about the worth of the investment of his predecessor, Mr Peter Obi when he retorted that the said investment was ‘worth next to nothing’.

Soludo had said: “Our interview is about the 2023 budget. I’m not talking about investments of any of my predecessors. By the way the one that you talked about I don’t know about that. I think there was something I read about somebody speculating about whatever investment. With what I’ve seen today, the value of those investments is worth next to nothing. So, let’s leave that aside.”

For such statement which has been adjudged as reckless, many people including supporters of Obi have come down hard on Soludo, with many accusing him of deliberate attempt to pull down his brother, or being afraid of the growing popularity of the Labour Party candidate.
Knocks had come in torrent and from many angles for the former CBN Governor. While many Anambra people condemned his comment, analysts from across Nigeria also did, with a larger percentage of the condemnation coming from users of social media.

In Anambra State, Mr Tony Ejike said: “I don’t know who is advising Soludo, how can you leave your interview on your budget and allow yourself to be dragged into an administration that far precedes you? This has shown that common sense is not common at all. It is not about being a professor, it is about having common sense.”

A journalist, Mr Chuka Nweze said: “This remark by Soludo is very uncomplimentary, unfriendly, rash, unnecessarily combative and negatively reflects on his person and character. This was the mentality he brought to CBN that destroyed so many poor people, one of the reasons that led to the conspiracy against his second tenure at the CBN and finally explains why Anambra people didn’t want him as governor for so many years after leaving CBN. Learn to be humble and respect others.”

Another respondent who’s name is simply registered as Jack said: “Soludo is simply jealous of Peter Obi and he is working for his boss Atiku. Peter Obi’s national acceptance has been giving Soludo and some disgruntled political elements of South East extraction sleepless nights. Peter Obi will win and they will all hide their faces in shame.”

Just four days after, and at a time when many would think that the governor had been blamed enough for the comment, he again stirred the hornet’s nest.
This time in what looked like a no-hold-barred fight, Soludo who was purportedly reacting to persons he described as Obi’s supporters, who were seeking to bully him, threw caution to the wind and fought Obi frontally.

In an over 4,000 word essay, authored personally by the governor, he completely dismissed the presidential bid of Obi with a wave of the hand, and came short of saying Obi whose presidential ambition has generated a lot of frenzy was not in the race.
Soludo’s claims in the piece with the title, “History Beckons, and I Will Not Be Silent (Part 1)” read: “Everyone knows that I don’t follow the winds or one to succumb to bullies, or shy away from a good fight especially, when weighty matters of principles and future of the people are involved. For full disclosure, let me state that Peter Obi and I are not just friends, we call ourselves ‘brothers’. But we have political differences: he left APGA for PDP after his tenure as governor, while I have remained in APGA since 2013.

“During the last two governorship elections in Anambra in 2017 and 2021, he led the PDP campaigns but APGA won landslide in both elections. By the way, in 2016, he visited and proposed that I defect to PDP and contest the 2017 election against the incumbent Willie Obiano, but I declined. After my victory in November 2021, he called to congratulate me, as I did to him in 2010.

“Obi’s presidential bid would only work in favour of Tinubu. Indeed, if I were Asiwaju Tinubu, I would even give Peter Obi money as someone heading one of the departments of his campaign, because Obi is making Tinubu’s pathway to victory much easier by indirectly pulling down PDP. The current fleeting frenzy, if not checked, will cost Ndigbo dearly for years. The South-east has the lowest number of votes of any region, but it is also the only region where the presidential race might be a four-way race (it is a two-way race in the other five regions) thereby, ensuring that our votes won’t count in the making of the next president of Nigeria.

“Afterwards, we would start complaining that we don’t get ‘what we deserve’ or cry of marginalisation. During the 2019 presidential election, the five South-east states were united for PDP but contributed merely 1.6 million votes to PDP, which was about the votes that Kano state gave to Buhari. The emotions might run to heavens but politics-power is about cold calculations, organisation and building alliances for power. In a democracy, it is a game of numbers. So far, I don’t see any of these— and 2023 might again be a wasted opportunity for Ndigbo! What is our Plan B, when Peter Obi loses in February 2023? Some people prefer that we should play the Ostrich while Peter Obi toys with the collective destiny of over 60 million Igbos.

“Yes, you pray that he wins, but what if he fails, as he is certain to? The Bible says that my people perish for lack of knowledge. As the saying goes, only those who plan can control the future. Ndigbo, wake up and smell the coffee. Of course, Peter Obi will get some votes and may probably win in Anambra State— as “home boy”. But Anambra is not Nigeria. If he likes, I can even campaign for him but that won’t change much. From internal state by state polling available to me, he was on course to get 25% in five states as at August this year. The latest polling shows that it is down to four states and declining.

“Not even in Lagos State (supposed headquarters of urban youths), where Labour Party could not find candidates to contest for House of Reps or Senate. The polls also show that he is taking votes away mostly from PDP. I used to think that for decent people, certain conducts are off-limits, and that in Anambra, politics is not warfare. Ideally, I should just have laughed off the infantile exuberances, as many friends advised .

“Most people have commended me for ‘tactfully avoiding being drawn into the Peter Obi issue’ until now. Since I am now being forced into the arena on this matter, I have a duty and a right of reply, if only for the records, and to also give the social media mob something substantive to rant upon and rain their abuses for weeks. In this preliminary response, there are some things I will refrain from saying here because, in the end, February/March 2023 will come and go, and life will continue.”

The essay has upon its release last Monday generated more reaction, with diverse comments on the stand of the governor. Unlike his first attack on Obi, this time, the governor was able to garner a handful of supports from those who backed his stand, but a greater majority still believe that Soludo’s stand is being fueled by a motive that is not in public domain.

In his reaction to the latest attack, Obi who had earlier kept mum was forced to react. In his reaction in a video, which was obviously from a campaign ground, Obi said: “He (Soludo) remains my brother, we are very close. I remain prayerful for him. For other things which I didn’t succeed, God has given him opportunity to do it and succeed. So, if there is anything pending, governance doesn’t finish, people are still in government in America, so you stop where you will stop, other people will continue from there.

“He is the governor of the state; he is my senior brother, he is even more intelligent than me because he is a professor, I am a trader, so he knows more and will be able to do things better than I am doing it. I have done my little own as a trader, now the professor is there, he will do his own as a professor, the schools I didn’t roof he will roof them, that’s how government goes.

“The one they said is worthless, we invested 3.5 billion naira in International Breweries…that facility is there employing directly and indirectly over 10,000 Anambarians. The shares was at a time being sold at N50, today the shares is about N5 or so. When you spread your investment some will go up some will come down but overall the company is still there, the company is still doing well, it is still part of the global chain and everything. I needed to explain it not because I am defending comments by my brother,” the LP candidate said.

Though Soludo and Obi have long known, and also attended the same university at different times, just as they have been family friends too, their political history became more known in 2010, when Soludo who was fresh out of CBN contested for the position of governor of Anambra State. This was at a time when Obi was seeking reelection as governor. Obi had floored Soludo in the contest.

Again, Soludo moved to APGA, Obi’s former party, and made attempt to contest to succeed Obi who was on his way out, but he was disqualified by the party as not having stayed long enough to be qualified to contest any position in the party. Many still feel that Soludo still bear the grudges of his two-time loss. This position is even strengthened by the recent edging out of a former national chairman of the party, Senator Victor Umeh from a senatorial contest, as he (Umeh) is said to have been the chairman of the party at the time he was disqualified. To end the cold war between the two prominent Anambra sons, many have begged the elders of the state to wade into the matter.