CJN: Judiciary Yet to Be Truly Independent, Administers Oath of Office on 62 Fresh SANs 37 mins ago

Travelling Down Nigeria’s History Through Music with Elders’ Corner 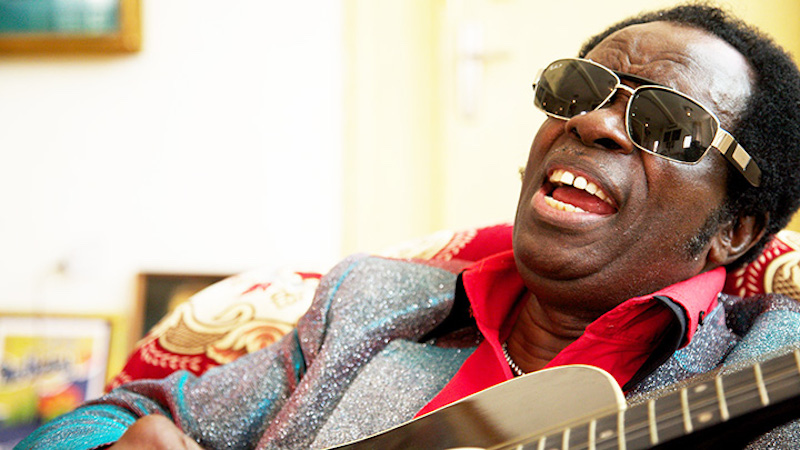 Monochrome pictures and footage jog memories of the past- an undulating history of Nigeria captured in the reels that formed the music documentary movie, Elders’ Corner. Directed by Siji Awoyinka, the visual narrative is interwoven with interviews featuring legendary musicians and jam sessions with a cross-generational band with Pa Jimi Solanke, Siji Awoyinka and Ade Bantu as lead vocalists.

Awoyinka himself is a musician, researcher and a story hunter as much as a storyteller. Using a self-narrative technique, he walks the audience through his encounter with Nigerian music and how each genre has served as historical signpost.

Starting with the pre-independence period, the UK-born director digs into his father’s music albums collection and past work as a band member for one of the earliest known highlife bands. His curiosity led him to the homes of many Nigerian artists, some of whom did not live long to see the final production of the documentary that had its premiere screening at the just concluded Africa International Film Festival (AFRIFF) 2022.

He started filming despite the paucity of funds because the stories are way too incredible to be abandoned or lost in archives. Like the narrator in the Netflix documentary, Hip-Hop Evolution, Awoyinka inserted himself in the story although he’d zoom in and out of the plot to allow the audience to follow the individual artist’s story.

From E.C Arinze to Victor Olaiya, the emergence of highlife music was trailed and situated within its socio-political contexts in the 96-minute flick. Highlife, for instance, is introduced as the soundtrack of the independence period, mirroring the optimism and upbeat nature of the Nigerian. But in 1967, a serious decline was recorded when the civil war paralysed social life, forcing most of highlife progenitors of Ibo extraction to leave Lagos.

Kakadu, a nightclub based in Yaba Lagos remains a cultural reference point in the documentary as the narrator draws insights from E.C Arinze, Jimi Solanke, The Oriental Brothers, Victor Uwaifo and others on how the prevalent situation in Nigeria impacted their music. For some artists, the civil war killed their careers completely. They lost their homes. They lost their families. And sadly, they lost their joy and confidence in Nigeria.

That hope would be rekindled after the civil war, particularly during the oil boom era in the 70s. Nigeria became the wealthiest African nation. The prices of crude oil surged and there was an increase in foreign exchange earnings. The musicians became sought after once again.

Juju music developed. It was party music and arguably a vehicle for lavish spending. Night crawling. Womanising- the language of revealing this by the musicians was humorous.

By this time, new voices of revolution began to evolve- The Lijadu Sisters, Fela Anikulapo Kuti and others. Now, this is where the narrator’s discretion clashes with the logic of history. A revered music critic and historian, Benson Idonije in his book “This Fela Sef’’ reveals that Fela was the first Nigerian musician to produce a jazz album. It’s common knowledge too that Fela’s emergence in the music scene did not start with Afrobeat although he is credited as the originator of that music genre in the court of popular opinions.

Perhaps, Awoyinka simply decides to place Fela in this context- as the antagonist of the Festival of Arts and Culture (FESTAC) which was touted as one of the machineries for the gross misuse of public funds. In truth, Fela is more than that. Having cut his teeth with the highlife legend, Fela made some contribution to highlife music with his Koola Lobitos band and even made some a hit song “Onidodo” amongst others.

Mary Afi Usuah’s story is also very moving. She is one of the returnee musicians for FESTAC. She left a flourishing music career and friends in Italy to return for the phenomenal festival but questions the nation’s loyalty to its citizens.

During the panelists session after the screening which was moderated by Keziah Jones, Awoyinka admitted that many musicians and footage were omitted from the final cut for different reasons. Elders’ Corner was meant to be in series because of the depth and breadth of the story edited by Charlie Hoxie.

While comparing the music scenes of then and now, Jimi Solanke thinks that the respect for musicians has appreciated over time. Rather than being critical of the young generation’s stride in lyricism, he remarked that the music is a reflection of today’s temperament.

The Producer of the documentary movie, Awoyinka revealed that it took 11 years to wrap up the production.  “There was a time I walked away from the film because we raised some money to shoot but when we began to edit the film, we ran out of money.”

The co-producer, Ade Bantu reflected on how the project started, the general reception of the project and how emotions ran high while filming.

“I remember when we met Fatai Rolling Dollars, he had moved houses and had lost some materials in the floods. I thought, ‘Wow, we’re losing our history. That was how we started. We couldn’t wait for outsiders to come and tell our stories. So, we started.”

“Every musician would lead us to another. That’s how we got so many people and we started collecting stories.”  Although Biafra was almost a taboo subject, some of the musicians opened up in the movie, recounting harrowing episodes.

“It was very emotional when we played their music to them. They cried. But they entrusted us with their stories and we know that we can’t mess things up,” he revealed.