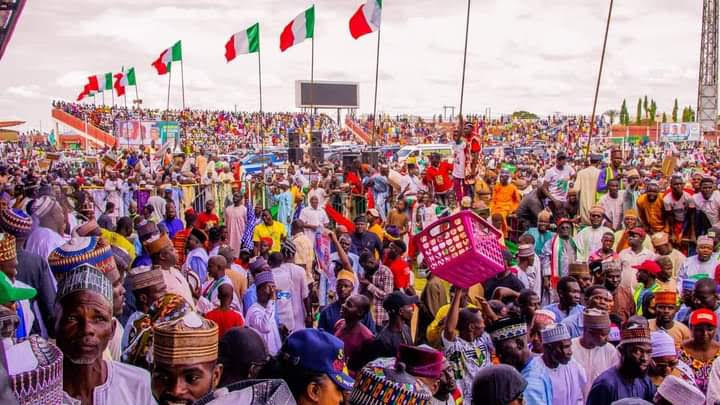 Over 142,000 members of the All Progressives Congress (APC) and other political parties who defected to the Peoples Democratic Party (PDP) were on Wednesday received by the presidential candidate of the PDP, former Vice President Atiku Abubakar.

THISDAY reports that commercial activities were temporarily paralysed just as there was traffic gridlock in Bauchi metropolis as a result of the unprecedented crowd that converged on the state capital for the event.

Similarly, the Abubakar Tafawa Balewa memorial Stadium was filled to capacity during the programme which was  also attended by thousands of members of the PDP from across the 20 Local Government Areas of the state.

The defectors included the majority of the the members of the Bauchi State House of Assembly led by the Speaker, Abubakar Y Suleiman as well as other notable politicians in the state led by former Deputy Governor Abdul Sule Katagum and former gubernatorial aspirant of the APC, Faruk Mustapha, who is the Director General of the PDP gubernatorial campaign Council.

While addressing the massive crowd that thronged the Stadium at an elaborate event, Atiku Abubakar congratulated the defectors for turning a new page in their political career, saying that it was a good development that will bring a lot of gains for the PDP in 2023.

According to him, “We are here today to celebrate this great achievement in Bauchi state.I can recall the last time I was here, I saw the development the state recorded in all sectors and this stride was achieved under the administration of Bala Mohammed of the PDP.”

He also said that, “Now you have a government that is always progressing, but you should always have this at the back of your minds that the politics in the North started from Bauchi State, that is why you must not treat Bauchi politics with levity.”

Atiku added, “Today, we recorded another achievement of additional people to the party, but this is not the main campaign, we will still come back again, we came solely to receive our brethren who decamped from the APC”.

He then assured that the campaign train will be back to Bauchi in a more bigger way because according to him, “We are here today just to receive and welcome into the fold, decampees from various political parties as well as to meet with PDP stakeholders in the state to chart away for victory in the 2023 general elections”.

In his brief remarks, the National Chairman of the PDP, Iyorchia Ayu, while receiving the defectors said that the North-East subregion had not yet produced a President, “but today, God has chosen Atiku Abubakar who is a son of the North-East to correct all the challenges bedeviling the nation and unify it” .

He then assured all the defectors that they will enjoy a level playing ground within the party at all levels, saying that, “the PDP train is moving forward, hence everybody should come on board.”

Speaking earlier, Bauchi State Governor, Senator  Bala Mohammed Abdulkadir, assured that he will deliver the state to the PDP in all the elective offices telling the Presidential candidate to count Bauchi State as one of the states he will get massive votes.

The governor further extolled the good leadership qualities of the presidential candidate of the party saying that he had what it takes to rule and unify Nigerians considering his nationwide connection and association.

Atiku, who visited the state for the first time  after emerging as the flagbearer of the PDP in the presidential primaries held in Abuja was received by thousands of supporters of the party and members of the APC in the state who defected to PDP.

From the Bauchi international Airport, Atiku Abubakar and the entourage proceeded to the Emir of Bauchi’s Palace for a courtesy call before heading for the Abubakar Tafawa Balewa Stadium.