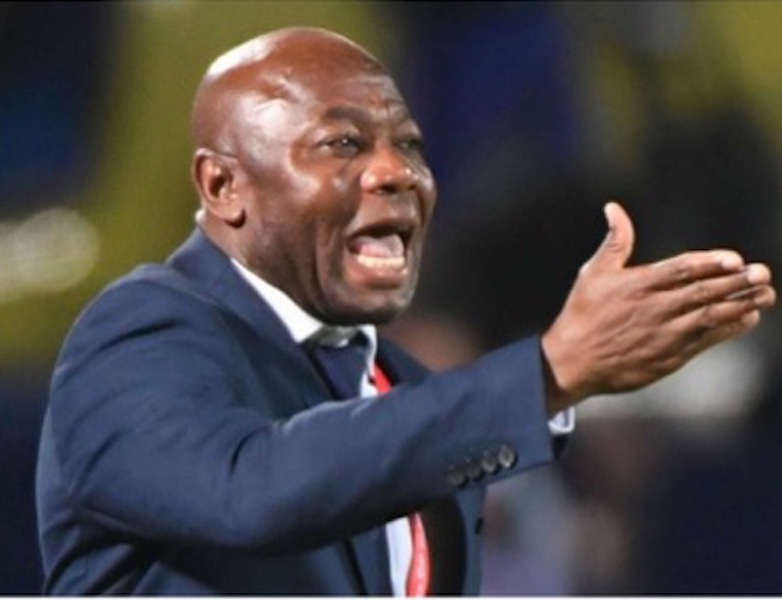 While many ex-internationals have been challenged to take up coaching jobs at club level and be assessed by their performance rather than lobbying the football federation for jobs in any of the national teams, one former player who has never been shy to take up the challenge is Emmanuel Amuneke. With coaching experience from the U17 and Super Eagles, Sudan, Egypt and Tanzania where he did the unthinkable by qualifying the team for AFCON after 39-year absence, the former FC Barcelona star has now taken his mission to Zambia

Former Super Eagles winger, Emmanuel Amuneke was on Thursday unveiled as consultant coach of Zambia Super League club, Zanaco FC. He was unveiled alongside his assistant, Emeka Amadi, who was a former Nigeria youth international.

“It is my first time coaching in Zambia. I am bringing my experience to the Zambian League and hoping to pass it on to the coaches here and hoping they grow more than myself.

“I will be happy to see the players that will pass under me to do better. I can guarantee you that we will work hard, at times you will see me play on the field with players so that we can give them confidence and hope they can be better than us coaches. I want to help the players grow,” Amuneke said.

Zanaco last week announced the appointment of Amuneke as the club consultant to assist coach Kelvin Kaindu, while the unveiling took place at the Zanaco Bank headquarters along Cairo Road in Lusaka, the capital of Zambia.

Zanaco last won the MTN/FAZ Super League Division in 2016 and came second in 2021.

They lost their last league match 1-0 at home on Sunday against Forest Rangers.

Amuneke has indeed vowed to take Zanaco FC to the summit of Zambian football and one cannot really doubt him considering what he did while in Tanzania.

The order was indeed a very tall one when Amuneke accepted to tinker the Taifa Stars of Tanzania whose primary objective was to hoist its flag at the 2019 Africa Cup of Nations in Egypt, after country’s last appearance at the biennial competition was in Nigeria in 1980 in which they failed to qualify from the group stage.

Ranked 140 in the world by FIFA, Tanzania is not a super power when it comes to Africa football and the challenge before Amuneke was how to turn around the fortune of the Taifa Stars and ensure a second AFCON appearance in 39 years.

After his unveiling, an elated Amuneke said he was beginning a new chapter in his career with his appointment as coach of Tanzania.

“This is new page of my career. I am a professional coach who believes any professional should be able to work anywhere. I am happy with the contract and I am ready to give my best as a coach in any place  I find myself. It’s a new page, a new environment but the same philosophy of the game,” he had declared after he was announced as coach of the Taifa Stars.

True to type, he did the unthinkable as he made history with Tanzania by guiding the Taifa Stars to their first Africa Cup of Nations appearance in 39 years after they defeated Uganda 3-0 at the National Stadium, Dar es Salaam. Amuneke’s charges finished second in group L with eight points, five behind leaders the Cranes of Uganda who have already qualified for Africa’s biggest football showpiece event.

In a chat with THISDAY, former national team goalkeeper, Christian Obi said it was just unfortunate that Nigerian coaches are not given the respect they deserve on the home front, but optimistic that Amuneke would do well with his new job.

“A prophet is not without honour except in his own country. It is just unfortunate that we don’t appreciate what we have in this country. Nigerian coaches are very good if given the right atmosphere to work and Amuneke is a very good example. He is technically and tactically sound and he is also has his coaching Grade A license,” Obi said.

The 1985 U-20 World Cup bronze winner indeed charged the eggheads of the Nigeria Football Federation to always consider Nigerian coaches first for the national team’s job.

“Its high time the NFF should start reconsidering its stand and attitude towards Nigerian coaches. It should start giving them the respect they deserve. Given the necessary support, Nigerian coaches would take the country’s football to a position of envy,” the former Heartland of Owerri goalkeeper trainer opined.

Obi is indeed optimistic that Amuneke would do well with Zanaco.

“I know Amuneke very well; I have worked with him before. He knew his onions and he would impart his knowledge to the players,” Obi said.

Amuneke was at the 2018 World Cup in Russia as a member of the panel set up by FIFA to shortlist the 2017/2018 season men’s footballers and coaches of the year.

Speaking on his appointment to the FIFA Russia 2018 Technical Study Group, the former Africa Footballer of the Year said then, “This role is a good one for me and Nigeria football as it goes to show that our football has grown.”

In his playing days, his goals were always crucial and had given Nigeria victory on a number of occasions. From the 1994 Africa Cup of Nations in Tunisia to the 1996 Olympics in Atlanta, to the Afro-Asian Cup at the National Stadium in 1998 and many others.

Many soccer fans were bemused that dare devil winger was kept on the bench by the Dutch tactician, Clement Westerhof for almost the entire duration of the 1994 Africa Cup of Nations in Tunisia. But in the final game against a stubborn Zambian side, the former Julius Berger of Lagos player was introduced and he scored the two goals that secured Nigeria’s second Nations Cup victory after winning an earlier one in 1980 on home soil.

An injury forced Amuneke to quit football in 2004, and the former left-winger took to coaching after earning his licence.

He handled both Julius Berger and Ocean Boys before he was drafted as an assistant coach to Manu Garba for the Golden Eaglets’ side that won the 2013 FIFA U-17 World Cup.

Two years later, Amuneke guided the cadet team to defend the title in Chile as the head coach, cementing his status as an astute youth coach.

And he successfully made the step up to international football after leading Tanzania to qualify for the 2019 AFCON, the country’s second-ever appearance at the tournament.

Amuneke’s last job before his last appointment was an assistant  to Austin Eguavoen during the last qualifying match of the 2022 World Cup against Ghana.