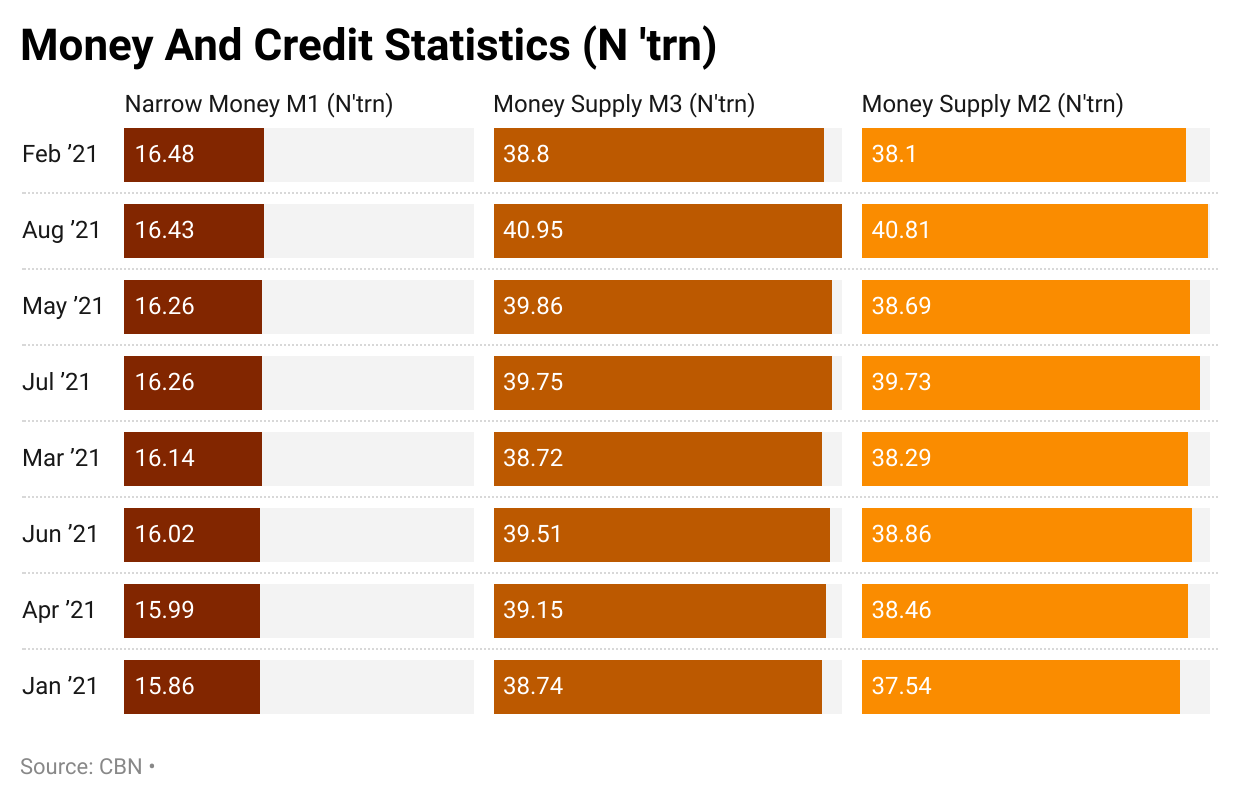 The Central Bank of Nigeria (CBN) in its money and credit statistics has revealed that money supply (M3) in the economy has increased to N49.36 trillion as of August 2022, a 9.21 per cent increase or N4.16 trillion Year-till-Date (YtD) when compared with the N45.19 trillion reported in January 2022.

This is against the backdrop of mounting federal government borrowings to finance the country’s huge budget deficit.

The CBN money and credit statistics showed that as the federal government continued to borrow, money supply has maintained Month-on-Month (MoM) trajectory growth.

M3, according to investopedia.com, is a measure of the money supply that includes broad money (M2) as well as large-time deposits, institutional money market funds, short-term repurchase agreements (repo), and larger liquid assets.

Analysts have attributed the surge in money supply to federal government borrowing to finance the budget, hike in the inflation rate, and numerous interventions by the central bank.

They added that Deposit Money Banks (DBMs) lending to the private sector propelled by the Loan-to-Deposit Ratio (LDR) policy by the CBN also a contributing factor to money supply in the domestic economy.

A financial Economist and Professor of Capital Market at the Nasarawa State University Keffi, Uche Uwaleke told THISDAY that federal government borrowings and distribution of revenue allocation to States and Local Governments by the Federation Account Allocation Committee (FAAC) have contributed to a significant increase in money supply this year.

He added that the mounting money supply is aiding hike in the inflation rate and forcing the apex bank to hike its Monetary Policy Rate (MPR).

“The CBN has realized that the money supply is getting higher and it is the reason behind hike in MPR to 15.5 per cent from 14 per cent to curtail further rise in inflation rate, ” he added.

Further analysis of the CBN statistics also showed that major components M2 and M1 recorded increase in the period under review.

Also contributing to the huge growth in money supply in six months of 2022, is the increase in credit to the private sector and government during the period.

CBN data showed that credit to the government rose by 55 per cent or N6.4trillion to N17.99 trillion as of June from N11.59 trillion in the corresponding period of 2021.

According to the CBN, credit to private sector in its Year-till-Date performance has gained 14.24 per cent to N40.19 trillion in August from N35.18trillion in January 2022.

So far in 2022, credit to private sector has added N5.01 trillion despite severe macro economic challenges in the banking sector.

The CBN statistics disclosed that credit to private sector gained 0.85 per cent Month-on-Month growth from N39.85trillion in July 2022 to N40.19trillion in August.

Speaking to THISDAY recently, analyst at PAC Holdings, Mr. Wole Adeyeye explained to THISDAY that, “The increase in credit to private sector is not expected to create more jobs as businesses are facing the high cost of inputs, mainly driven by high inflation.

“Nigeria’s inflation rate at 20.52per cent in August 2022. This shows that businesses will have to borrow more to produce (most times, below the maximum production level). Demand-pull inflation may create more jobs but unfortunately, Nigeria is witnessing cost-push inflation at the moment.”

The Vice President, Highcap securities limited, Mr. David Adnori, stated that the 0.85 per cent marginal growth in credit to private sector in August demonstrated how double-digit inflation has affected nominal demand for Naira by private sector businesses, given continuing rise in input cost and the usual burden of imported inflation.