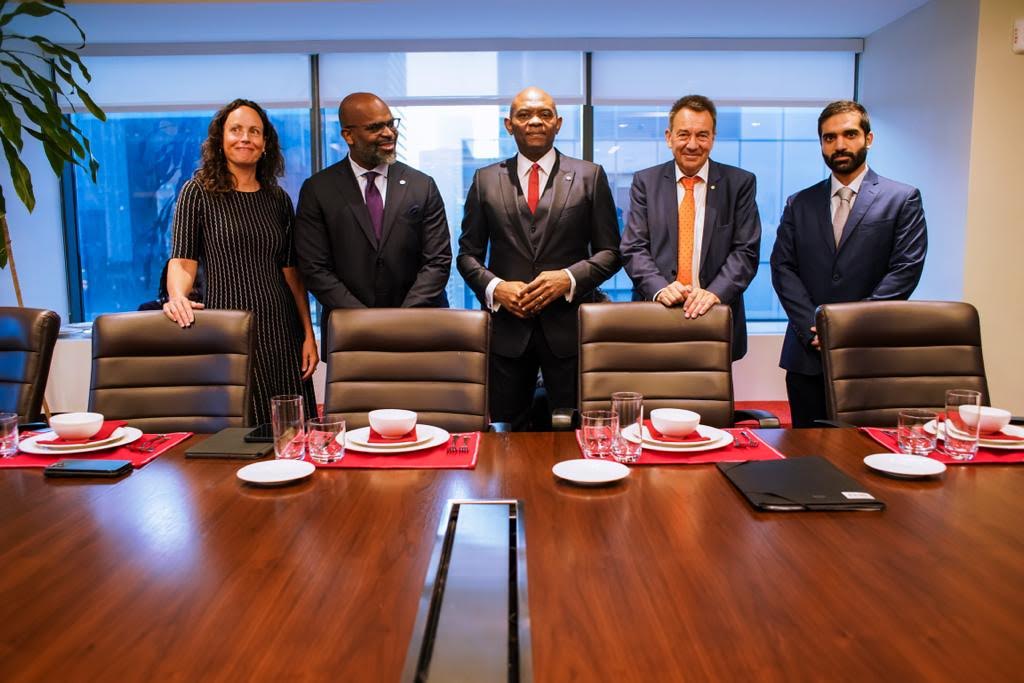 Chiemelie Ezeobi reports that the collaboration, which happened at sidelines of the 77th United Nations General Assembly in New York, would go a long way to empower entrepreneurs, particularly women and youth through funding, training, and mentorship

“We believe in African Entrepreneurship.

So we built an infrastructure that supports entrepreneurial talents across the continent”, the above ethos are the guiding principle of The Tony Elumelu Foundation (TEF).

Started in 2010, the foundation has blossomed to become the leading  champion of entrepreneurship in Africa with the objective to “empower women and men across our continent, catalysing economic growth, driving poverty eradication and ensuring job creation”.

Founded  by Nigerian economist, and philanthropist, Tony Elumelu, who also chairs Heirs Holdings and Transcorp, the foundation believes the private sector is critical for Africa’s development by creating social and economic wealth.

Since inception, the foundation has supported over 1.2 million African youths with 15,847 empowered through programmes aimed at eradicating poverty, illiteracy, high density of migration for greener pasture, and hunger among other salient issues affecting the growth of Africa.

Roundtable with Africa in Focus

With its unprecedented passion for entrepreneurs, especially in continent, the foundation is known for scouting out deals that would be beneficial to African youths.One of such recently took place in UBA Building, New York at the sideline of the just concluded 77th United Nations General Assembly (UNGA). At a

Thrilling the attendees with their success stories,  the trio of three TEF alumni- Ugochi Obidiegwu, founder of The Safety Chic; Kwabena Danso, founder of Boomers International Ltd and Chioma Ukonu, co-founder of RecyclePoints, were effusive about the many opportunities TEF has brought their way directly and indirectly through the seed capital, training and mentoring received from The Tony Elumelu Foundation.

TEF as Vehicle of Transformative Change

For moments such as this, Elumelu is often seen beaming like a proud father. Who could blame him? Most of the TEF alumni have gone on to do great things using the foundation as a springboard.

According to Elumelu, “Often, I am asked what achievement I am most proud of, and my answer is always the same – the sense of fulfilment I feel, when I interact with the beneficiaries of The Tony Elumelu Foundation.

“Hearing their testimonies, successes and challenges, the impact that $5,000 has on their businesses, ideas, and communities, this gives me joy and excitement.  When people ask what motivates me, this is it.

“I am delighted that U.S. African Development Foundation (USADF) is joining the other global institutions who partner TEF, to rewrite how development assistance in Africa can catalyse and empower our youth, through the $20million agreement signed with TEF yesterday.

“The partnership will empower many, many more entrepreneurs, over a period of five years through funding, training, and mentorship.

“I have always said that the world needs to pull resources, together to commit in empowering the youth economically, to radically effect change.  This is happening.

” I am glad that The Tony Elumelu Foundation is the enabling vehicle for this, playing its part in rallying this coalition for transformative change.  Thank you U.S. African Development Foundation (USADF).”

“It is not how much we have in our bank accounts that matter, what matters is the impact we bring, the lives we touch, the ability to help take people out of poverty to prosperity, so that we share. The more the merrier — that is the motivation,” he stressed.

Essentially, USADF creates pathways to prosperity for marginalised populations and communities across Africa, which was why the partnership was well received.

For Travis Adkins, president and CEO of USADF, Elumelu’s deliberate investment in women and African youth is at the “core of what USADF seeks to do on the continent”, adding that he was proud of the collaboration between both foundations.

He said: “We live in a world where majority of the population on the continent — women and youth — are actually spoken of as if they are a small niche constituency, when in fact, they are the marginalised majority.

“To recognise that and make them central to everything we do: there is no mainstream, they are the mainstream. We are very excited to be here and to begin this work together.”

Although TEF is open to young entrepreneurs, special attention is however paid to women. According to TEF CEO, Ifeyinwa Ugochukwu 60 per cent of the 2021 TEF entrepreneurship programme beneficiaries were female, adding that TEF is proud to be funding African women entrepreneurs.

She said: “When you put the money in the hands of a woman, it goes far, and that is why when we started the foundation, the first two years, we had 29 per cent participation from women, and we said ‘no, that’s not enough’ if you were in school that is actually an F.

“So we worked intentionally to increase the number of women participants, and I am so happy to say that in 2021 we had 60 per cent participation from women — and that is as a result of our partnerships with the likes of Google, EU, who were empowering more women through our entrepreneurship programme.”

Meanwhile, she lamented that although women  make up 70 per cent of the workforce in Africa, only 30 per cent make money and own only 10 per cent of property on the continent, hence TEF’s constant push for affirmative support for women by way of empowerment.

Also not left out was plans to solidify with Google to empower more entrepreneurs across the continent.

According to Jacquelline Fuller, president at Google.org, they are looking for more partners with such experience and local knowledge of the African market, adding that Google is providing not just funds, but also technical skills, and manpower to help drive partnerships and economic growth in Africa.

Also at the roundtable was the President of the International Committee of the Red Cross (ICRC), Peter Maurer, who posited that TEF and ICRC have remained focused on giving African talents a sure and faster route to progress.

“Working with TEF is one of the most interesting aspects of partnering in a completely new way together, bringing a young generation out of dependency and out of conflict,” adding that the TEF model of giving grants to women entrepreneurs is a good way to go because the money will be felt in an impactful way.

Also speaking, Director for Africa, National Security Council, Deniece Laurent-Mantey, particularly commended TEF and Elumelu for the constant way it was promoting the youth. She harped that they are ready to take it a notch higher and ensure more reach. Her pledge was well received by Elumelu and others given the huge and innate potentials that African youths posses.

I have always said that the world needs to pull resources, together to commit in empowering the youth economically, to radically effect change. This is happening.  I am glad that The Tony Elumelu Foundation is the enabling vehicle for this, playing its part in rallying this coalition for transformative change