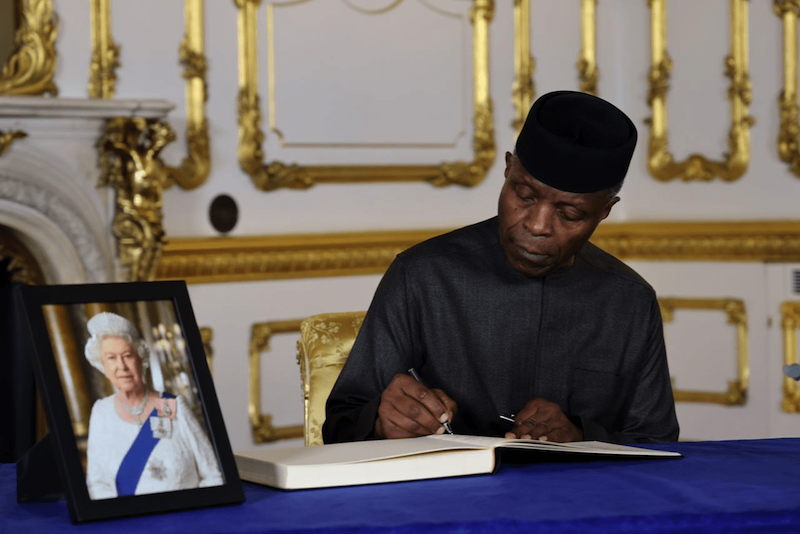 *She was monarch for all seasons, says vice president

*King Charles issues thank you message to the world

The Queen would be laid to rest this morning at the end of an official 10-day period of mourning.
Two thousand people including foreign royals, world leaders, presidents and prime ministers would flock to the gothic church for a day of pageantry, military processions and solemnity in honour of the late Queen.

Millions would be watching from home and around the world, as the funeral could become the most watched television broadcast in history.
Osinbajo, who is representing President Muhammadu Buhari said the late Queen Elizabeth II was a monarch for all seasons who brought people together from all over the world. He stated this yesterday, in a short tribute at the Lancaster House.

The vice president also joined other world leaders to pay their last respect to the late British monarch at the Queen’s lying in state at different times.
In the condolence register at Lancaster House, the vice president noted that, “Nigeria joins the government and people of the UK, the Commonwealth and rest of the world in expressing our sincere condolence to the royal family on the passing of a monarch for all seasons. May the Lord bless her memory.”
Later at a bilateral meeting between Osinbajo and the UK Foreign Secretary, they discussed how to improve trade ties between both countries especially expanding opportunities for Nigerian businesses and supporting the country’s climate objectives.

They also discussed the imperative of strengthening international coalition to tackle insecurity in the Sahel and the horn of Africa region.
The UK Foreign Secretary welcomed Nigeria’s participation in the funeral programme for Queen Elizabeth ll, expressing gratitude for Nigeria’s solidarity and friendship with the UK on the mourning of the monarch, and also celebration of the life and times of the late Queen.
By yesterday evening, King Charles III hosted the vice president and other visiting world leaders at a reception at the Buckingham Palace as part of activities for the State Funeral of the British monarch.

This morning the vice president would also attend the Funeral Service for the Queen at Westminster Abbey.
Biden described Queen Elizabeth II as, “decent, honorable and all about service” as he and first lady Jill Biden signed a condolence book yesterday ahead of her funeral.

“To all the people of England, all the people of the United Kingdom – our hearts go out to you,” the Voice of America quoted the president to have said after he spent three minutes writing a message in a condolence book at Lancaster House, a royal property near Buckingham Palace in London.
“And you were fortunate to have had her for over 70 years. We all were. The world’s better for her.”

He added that the queen reminded him of his late mother, and that, when they met, “she kept offering me more, I kept eating everything she put in front of me.”
On Sunday, as people milled around central London, world leaders made their way to Lancaster House to deliver condolences over the queen’s death on September 8 at the age of 96.

“This is a time of grief, but also a time of deep gratitude,” said Australian Prime Minister Anthony Albanese, who leads one of the 56 countries in the Commonwealth of Nations, an organization of many former British colonies now led by Elizabeth’s eldest son, King Charles III. “Australians give thanks for the life of service of Queen Elizabeth II, a life defined by commitment to family, to country, to the Commonwealth.”

The British crown also extended a controversial funeral invitation to Saudi Arabia’s Crown Prince Mohammed bin Salman, who was alleged to be responsible for ordering the murder of journalist Jamal Khashoggi in 2018. But they did not invite the leaders of Russia, Belarus, Syria, Afghanistan and Venezuela.

On Sunday, as the skies over London remained clear, thousands of people milled around Westminster, the center of the city. London police cheerfully marshalled the heaving crowds of families, veterans carrying bouquets and children holding lollipops, as the Queen’s image beamed at them from shop windows.
Meanwhile, On the eve of the monarch’s funeral, King Charles offered his gratitude to, “all those countless people” who had offered “support and comfort” following his mother’s death.

He said in a written message issued by Buckingham Palace: “Over the last ten days, my wife and I have been so deeply touched by the many messages of condolence and support we have received from this country and across the world.
“In London, Edinburgh, Hillsborough and Cardiff we were moved beyond measure by everyone who took the trouble to come and pay their respects to the lifelong service of my dear mother, the late Queen.

“As we all prepare to say our last farewell, I wanted simply to take this opportunity to say thank you to all those countless people who have been such a support and comfort to my family and myself in this time of grief.”
According to Sky News, the King would lead the nation in mourning for its longest reigning monarch today as Westminster Abbey stages spectacular state funeral for Elizabeth II.