NNPC: How Illegal Connecting Line from Export Terminal into High Sea Was Discovered After Nine Years 39 mins ago 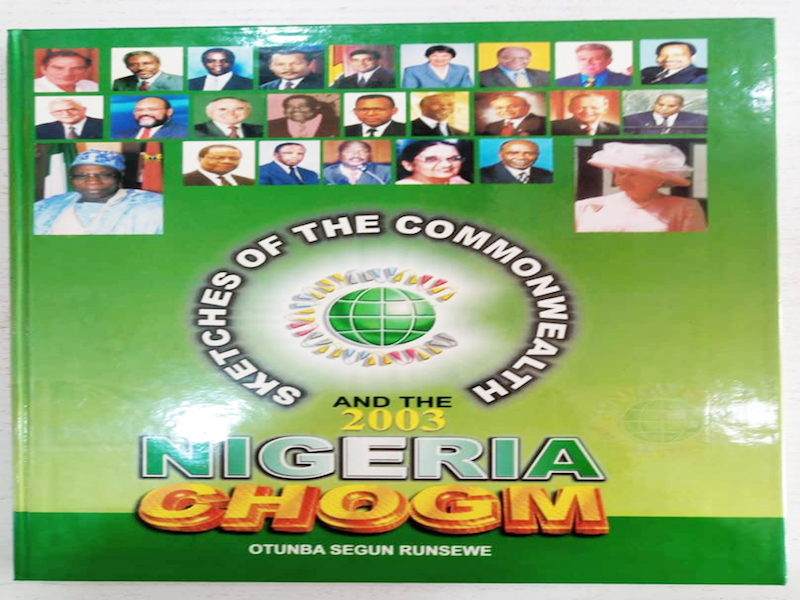 In December 2003, Queen Elizabeth II – who died on September 8, 2022, at the age of 96 – arrived in Nigeria to attend the Commonwealth Heads of Government Meeting (CHOGM) in Abuja. It was her second visit to the country, having visited Nigeria for the first time in 1956 for 20 days.

The CHOGM is Commonwealth’s highest consultative and policymaking gathering.

As documented in the seminal book, Sketches of the Commonwealth and the 2003 Nigeria CHOGM’ written by the current two-term Director General of National Council for Arts and Culture (NCAC), Otunba Segun Runsewe, the Queen and the Heads of Delegation were ushered into the International Conference Centre, Abuja, with “a thematic presentation of Nigerian culture.”

In the foyer, the Heads of Delegation were treated to an exhibition titled, “Celebrate! Nigerian Art for the Commonwealth.” The centrepiece of the exhibition was a display of paintings, drawings, and prints by Chinwe Chukwuogo Roy. This included a Golden Jubilee portrait of Her Majesty, Queen Elizabeth II; a new full-length portrait of the then President, Chief Olusegun Obasanjo; and Chief Emeka Anyaoku, the former Secretary General of the Commonwealth.

The grand entrance of the Queen and other Heads of Government was announced by the Master of Ceremony, Mr. Ikenna Ndaguba, heralded by the call of the big drums – ‘dundun’ and ‘Ikoro’; 52 children carrying the flags of each Commonwealth country present and that of the Commonwealth rolled in and fixed the flags in alphabetical order behind the platform seating the Heads of Delegation. Then the Okpa Ekpe masquerade, a traditional symbol of law and order, galloped into the auditorium, acknowledging the entrance of the dignitaries as the ‘Ikoro’ drum continued to boom, interspersed by the drummer’s call and the chanter’s emotive rendition of the poem ‘The Call of the Ikoro Drum’, which testified to the ideals of the Commonwealth, welcomed the Heads to Abuja CHOGM, while urging them to heed the advice of the Ikoro drum by always upholding the principles of the organisation.

As she ventured to take her seat, the Queen was escorted by President Obasanjo, while the Secretary General, Rt. Hon.Donald McKinnon and the Duke of Edinburgh preceded them.

The president received the symbol of peace and good governance from the Ekpe masquerade and declared: “Your Majesty, Queen Elizabeth II of England, Your Excellencies, Distinguished Ladies and Gentlemen, Our people and our ancestors welcome you to Abuja CHOGM 2003.”

After the presentation came a display of assorted dances, costumes, and drums. The segment opened with the maiden’s dance, “Nkwaumuagbogo” from Ebonyi State, a high-speed dance. Then the Malik Dancers and “Koroso” performed with flutes called “Sarewa” and an athleticism that showed the agility of the average Hausa-Fulani youth.

Then entered Ara, the female “dundun” drummer, who used the talking drum to interpret the different shades of her body movements and those of the other dancers in a musical ensemble. The “dundun-bata” dance is a traditional yet social dance of the Yorubas of South-west Nigeria and is associated with royalty.

Following the Yoruba troupe was a performance of the Swange dance – the supple, fluid, swinging Tiv dance of the youth and maidens. Into it was infused another Tiv dance, ‘Tivsetsere’, or the ‘Cats dance’, in which the dancer, through supple, flexible muscular contractions, imitates animal movements. The Swange gave way to the Agbaka masquerades from Kogi State. Accompanied by a flutist, three drummers, and a chanter, Agbaka exhibited fast, energetic, powerful dance movements to capture the essence of youthful exuberance.

It then gave way to the slow moving, graceful dance of the Kanuri, the Maliki dance, which sought to capture the Kanuri core values of peace, elegance, and pride.

After a captivating performance of the song ‘Otenkwu’ led by Prof. Laz Ekwueme and another five minutes of visual presentation on world sports, Nigerian tourism and the country’s business potential, the CHOGM choir and reputable Nigerian artists such as Bright Chimezie and Dede Mabuaku performed the CHOGM anthem. The star artiste, Sir Shina Peters, also entertained guests.

At the end, the Queen was visibly pleased. In her speech, she thanked the Nigerian government for inviting her back to the country after her previous visit in 1956.

“Although much has changed since then, the warmth of the Nigerian welcome remains a constant and we have again been touched by the generous reception we have been given,” the Queen said.

She lauded Nigeria’s return to democracy in 1999 and its development efforts, noting that Nigeria has “an important voice on global issues.”

The Queen urged the Obasanjo administration to keep the torch of freedom burning. “I am told that a Nigerian proverb runs: ‘never start a journey if you have no plan to finish it’,” the Queen said.

By setting the tone for the Abuja CHOGM, the Queen had ensured the summit would be a success. Although her role as Head of the Commonwealth carries no formal functions, Queen Elizabeth II’s presence and words held great symbolic significance and helped to underline the sense of the Commonwealth as a family of nations.

During her 2003 visit, she participated in several functions, spreading the Commonwealth message of peace, democracy, equality and good governance.

In the wake of Queen Elizabeth II’s death, the book, which was first published in 2005 by West African Book Publishers Limited, takes on increased significance. It is a compendium of visual information reflecting on the Commonwealth’s history, character, organisational structure, and future prospects. It includes a minute breakdown of the deliberations at CHOGM 2003 and decisions made thereafter.

In his foreword to the book, President Obasanjo noted that “it is a true account of the major events and activities that took place during that memorable meeting. It also captures the spirit and essence of the Commonwealth as a highly respected international organisation.”

The President added that Runsewe’s timeless offering “is a store of value and useful reference material for major libraries and institutions in Nigeria and the entire Commonwealth.

“This publication will continue to remind all those that come across it of the core principles that bind the Commonwealth Nations together in partnership for peace and prosperity in the world.”

The Abuja CHOGM was eventually described as a staggering success by at least 49 of the 53 Heads of States that attended the event. Their collective verdict, “Abuja CHOGM is the best ever”.

One of the foreign journalists that covered the Abuja CHOGM, Karen Middlemen of The West Australian Newspaper who hitherto was afraid of travelling to Nigeria due to negative stories written about the country. But all stereotyped mindset changed after spending days in Abuja. Hear her: I have seen a vibrancy in Abuja that people back home do not know about Nigeria. Obviously, there is a lot of development and places to go here, the people are friendly, the food is good and entertainment is wonderful.”

But it will also be remembered as the last event in Nigeria graced by the now departed Queen Elizabeth II.

“I received the news with a shock,” Runsewe told THISDAY of the Queen’s demise. “The Queen gave fantastic leadership of the Commonwealth. She was in control and there was coordination. The world is going to miss the Queen. And she is one leader that the people loved. She has been able to set up a structure that I believe will sustain the Commonwealth.”

Capturing her last moments in Nigeria in his book now seems prescient to Runsewe – at least, future generations can get a glimpse of what it felt like when Her Royal Majesty graced the soil of Africa’s largest economy. “It’s a lesson that anything we are doing, we should always document,” the author said.