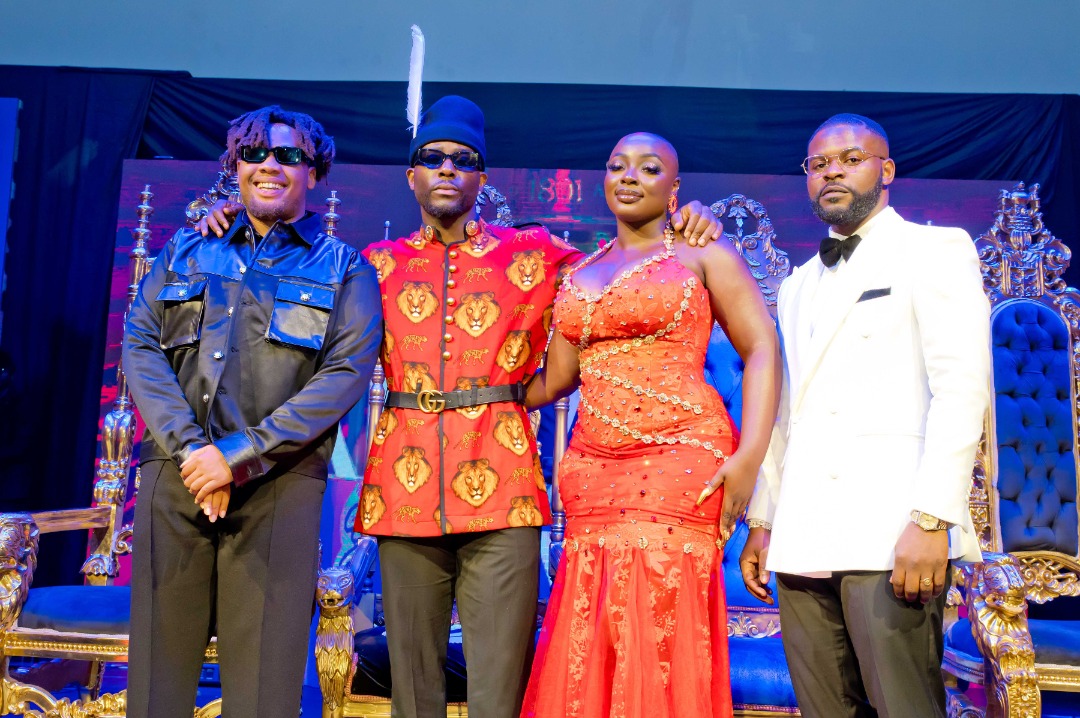 It was a night of luxury, glitz, and glam as Chivas Regal unveiled four ‘New Regals’ as part of activities to kick-off its “Be Real, Be Regal” Campaign. Folarin Falana, popularly known as Falz; Daniel Benson, now known as Bnxn; Owoh Chimaobi Chrismathner, also known as Zoro; and Tomi Garber also known as DJ TGarbs were all revealed as the new brand ambassadors of the premium scotch whisky brand in an exclusive event, the Chivas Mansion party, which held on Saturday, September 10th at the prestigious Monarch Event Centre, in Lagos.
The Chivas Regal Mansion party played host to several other celebrities and representatives across the fashion, music, entertainment, and technology industries among others, and was filled with a variety of exciting, experiential activities, leaving guests highly entertained all through the event.

Speaking at the event, Brand Manager, Chivas Regal, Elizabeth ‘Betty’ Anthony stated that the “Be Real, Be Regal” Campaign was borne out of the brands’ commitment to continue to inspire the Nigerian ‘The Hustle Generation’ the older Gen-Z’s and younger millennials to embody the hustle mentality of redefining culture and creating new paths to success.
“The Hustle Gen are Nigerians pushing boundaries of a traditionally conservative society and increasingly adding cultural players to the global league heading upwards. They are unapologetically successful. They are the street heroes, redefining luxury as an act of individuality and expressing global trends in their own way. They are youths showing that success is even more important when there isn’t support from family or the society, and most importantly, they are Nigerians who celebrate success together because the belief of shared success is deeply entrenched in them. This is who the Hustle Gen represents and who Chivas Regal celebrates” Anthony said.

On the New Regals, Anthony added said “They are a collective of market specific influencers who authentically live the “Be Real, Be Regal” ethos. They are our voice in culture, and they prove our commitment to cultural participation. The Chivas New Regals all embody these attributes and are all very inspirational in their own rights, which is why they were carefully selected to join the Chivas Regal family.

Speaking on behalf of the New Regals, Folarin Falana ‘Falz’ said “For us it is about rewriting the rules, living our truth, and inspiring a new generation of achievers to succeed against all odds. We do not walk the path of success; we create our own. We are redefining culture, and we are proud to be Regals” He said.

About Chivas Regals
Chivas Regal is a blended Scotch whisky manufactured by Chivas Brothers, which is part of Pernod Ricard. It was founded in 1786, with its home being in the Strathisla distillery at Keith, Moray in Speyside, Scotland, and is the oldest continuously operating Highland distillery.s

Chivas Regal come in Chivas 12- to 25, with the most premium blends being Ultis and Icon, Chivas XV being the most preferred blend for the hustle generation in Nigeria.

About the Chivas New Regals

Folarin Falana, better known by his stage name Falz, is a Nigerian rapper, songwriter and actor who began his career while in secondary school after forming a group called ‘The School Boys’ with his friend before his professional career as a music artist began in 2009. Falz became more well-known after releasing the song “Marry Me.” He currently owns an independent record label called Bahd Guys Records.

Daniel Benson, is professionally as Bnxn (pronounced as Benson), is a singer, songwriter. In March 2022, ‘Finesse’ one of the songs he featured on, peaked at number 52 on the UK’s Official Singles Chart. Bnxn has won several awards, one of which he recently won this September in the United States.

Owoh Chimaobi Chrismathner professionally known by his stage name Zoro or Zoro Swagbag, is a Nigerian musician who raps in Igbo language. The thirty-two-year-old rapper won the 2016 Nigeria Music Video Awards ‘Best indigenous concept in a visual’.
Known for her unique fashion sense and stye, DJ TGarbs, born Tomi Garber, is one Nigeria’s most rated Disc Jockey who constantly spins and shuts down parties across the city ruling a mostly male dominated. She has since been widely celebrated for her body positivity and confidence.