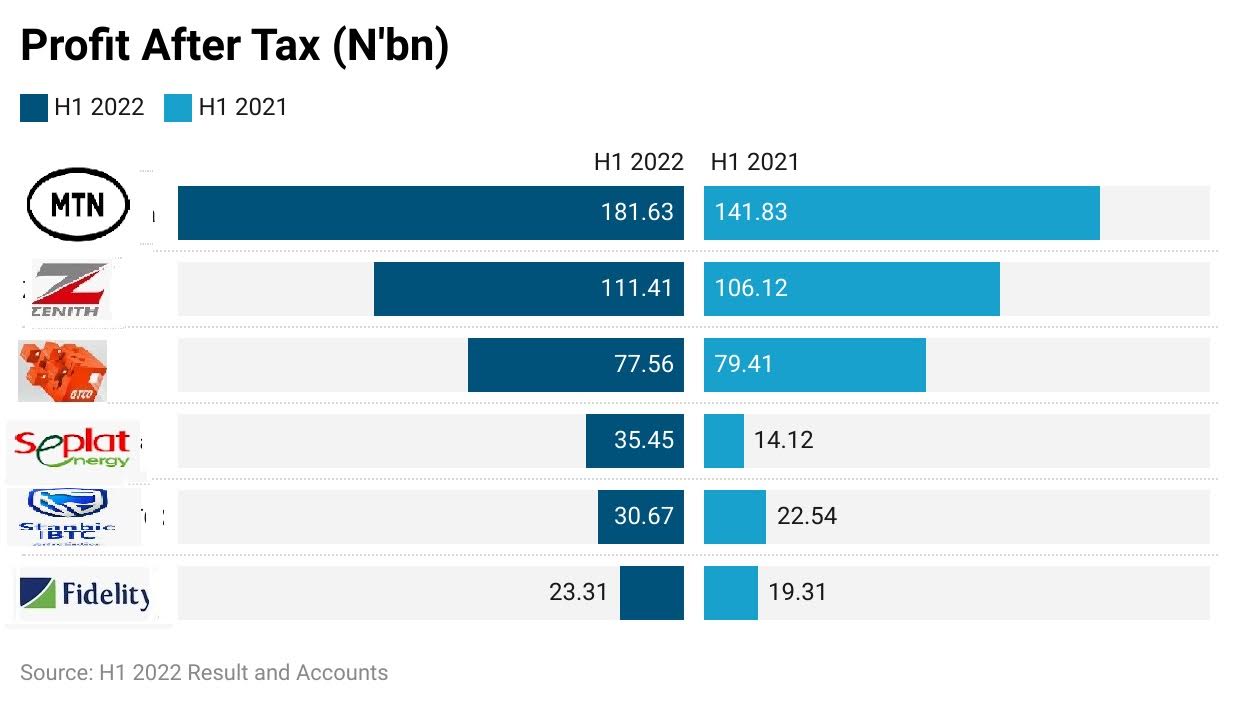 Following robust profits despite macro economic challenges, a total of seven companies on the Nigerian Exchange Limited (NGX) have declared a sum of N167.5billion as interim dividend for half year (H1) ended June 30, 2022.

This is an increase of 30 per cent from N128.85 billion interim dividend reported in the corresponding half of 2021.

With about 28.1 per cent rise in profit after tax to N181.63 billion in H1 2022, MTN Nigeria lead other listed companies on the NGX with the highest interim dividend payout to shareholders in the period, followed by Stanbic IBTC Holdings and Zenith Bank.

Interestedly, Fidelity Bank for the first time joined the list of banks to declare interim dividend in H1 2022.

The CEO, MTN Nigeria, Karl Toriola in a statement noted that, “during the first half of 2022, we made good progress in strengthening the resilience of the business in the face of our increasingly challenging operating environment with rising energy, food, and general inflation putting pressure on consumer spending.

“The conflict in Ukraine as well as the implementation of a ‘zero-COVID’ policy in China, has also put a strain on global supply chains. To mitigate global supply chain and exchange rate risks, we accelerated capital expenditure for network expansion into the H1 2022.”

MD/CEO of Fidelity Bank, Nneka Onyeali-Ikpe stated that, “We are delighted with our H1 2022 performance which showed strong growth across key performance indices.

“With improved efficiency and customer experience around our network, customer transactions have grown considerably as we optimize our balance sheet and build up a large stock of stable low-cost deposits.”

In addition, Okomu Oil Palm Company announced an interim dividend of N7 per 50 kobo ordinary shares to its shareholders, translating into N6.68billion.

Capital market stakeholders attributed the increasing interim dividend payout to the steady increase in business activities post-covid-19, stressing that companies operating in Nigeria have maintained stronger fundamentals amid the worst foreign exchange crises, among others.

Speaking with THISDAY, the Chairman, Progressive Shareholders Association of Nigeria, Boniface Okezie commended MTN Nigeria, and others for interim dividend payout to shareholders, stressing that these companies stand out despite economic challenges.

According to him, “These companies have shown resilience despite domestic and global economic challenges. They have consistently declared interim dividend as their policy to reward shareholders and we are delighted.

“Fidelity Bank interim dividend for the first time in over 30 years is a welcome development. The declaration of interim dividend by the management of Fidelity bank showed the growth of the bank and it is poised to become a Tier-1 bank  in Nigeria.”

The Chief operating officer of InvestData Consulting Limited, Mr. Ambrose Omordion, said, “It is a good development for seven companies to declare over N160billion interim dividend in H1 2022.

“Their performance showed these companies remained strong post-covid-19 pandemic era and it good for our domestic market.

“We have seen stronger earnings and assets for companies on the Exchange. The banking sector has remained consistent in dividend payout to shareholders and Fidelity Bank joined the league.”

He noted that interim dividend is another source for investors to make money in the capital market, calling on pensioners, among others to take advantage of the capital market and invest in fundamental stocks that consistently pay dividend shareholders.

CEO, Wyoming Capital & Partners, Mr. Tajudeen Olayinka stated that Zenith Bank, among others, are simply keeping up with traditions of paying shareholders’ a dividend.

He added that, “It is also evidence of good showing in the first half of the year by those companies and some other listed companies that may not be paying an interim dividend.”