Pushing the Frontiers of Broadband Connectivity 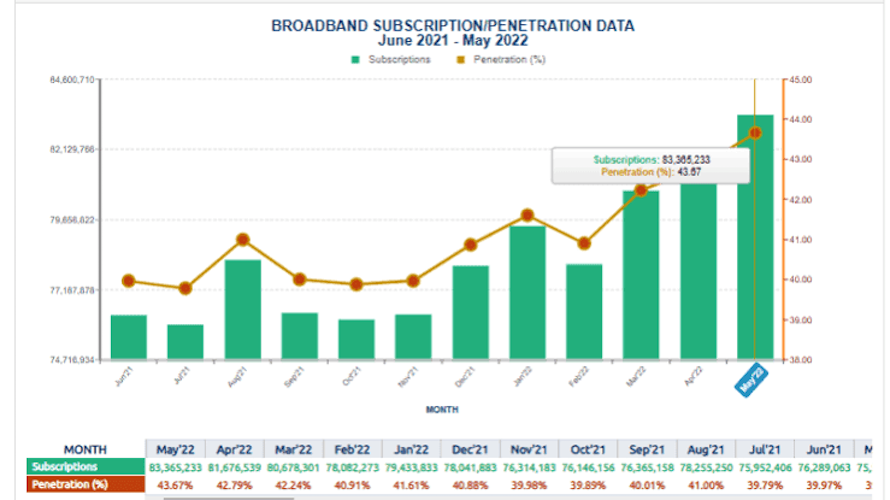 In preparation for its 19th anniversary in telecom service offerings, coming up in few days, Globacom is set to further deepen broadband internet penetration with Glo1, writes Emma Okonji

Globacom, an indigenous Global System for Mobile Communication (GSM) operator, will be celebrating 19 years of telecom service offerings in few days, having rolled out its initial GSM services on August 29, 2003.

With Glo1, internet access has become easily affordable. Anybody who has an internet-enabled phone can afford data. For instance, with just N500, a subscriber will get 2GB data, with N50 the customer gets 50MB, N100 gives 150MB. For big users on the network, they can get as much a 675GB for N75,000 and 1Tera Byte (TB) for N100,000. The telecom company also gives double data bonus to Glo subscribers.

Having served Nigeria and other West African countries with robust telelecom services for 19 years, coupled with its internet services via Glo1, the telecom company has said it will further deepen internet connectivity across Nigeria and ensures that Nigeria meets its target of 70 per cent broadband penetration by 2025.

Fibre optic cables have revolutionised the world of network communications ever since their inception nearly four decades ago. They are more advanced alternative to the traditional methods of networking which use metallic wires.

Fibre optic cables have been part of Nigeria’s telecommunications infrastructure for decades, right from the days of the Nigerian Telecommunications Limited (NITEL), which operated a monopolistic telecom market for decades before the emergence of GSM operators. NITEL used the South Atlantic 3 (Sat-3) cable, which it owned together with a consortium of over 30 telecommunications companies from across the world. It provided a link between Nigeria and the rest of the world. For many years it was the best thing that happened to Nigeria’s telecom sector and any misfortune that befell it by way of fibre cut, would always translate into massive disruption in Nigeria’s business environment, as many major companies relied either directly or indirectly on the connectivity provided by the infrastructure for their operations.

One such incident in late July 2009, caused internet blackouts in several west African countries including Benin, Togo, Niger, and Nigeria. The banking sector was also destabilized at that time, as well as other sectors of the economy that relied heavily on internet connectivity for their operations. Then, the economy and security of Nigeria was threatened.

But Nigeria’s Second National Carrier, Globacom, came to the rescue, when it berthed Glo1 in 2010, and other broadband operators like MainOne, MTN WACS, also came onboard also saved the country from the precarious situation by launching their higher capacity submarine cables. The berthing of Glo-1, a wholly-owned facility that brought unprecedented bandwidth from Europe to Nigeria and other West African countries, marked the beginning of the crashing of bandwidth costs in Nigeria and the rest of West Africa, thereby facilitating more access to broadband internet.

Broadband penetration in Nigeria currently stands at 44.5 per cent, solely driven by major players in the telecom sector, such as Glo 1, which has not only brought in the required international bandwidth, but has also invested generously in the infrastructure to deliver the last mile to end-users, while also breaking the cost barrier by introducing affordable tariffs.

Nigeria’s broadband penetration increased from 40.9 per cent in February 2022 to 44.5 per cent in July 2022, a figure considered hopeful for achieving the national broadband target of 70 per cent in 2025.

Executive Vice Chairman of the Nigerian Communications Commission (NCC), the telecoms industry regulator, Prof. Umar Garba Danbatta, who disclosed this last week during a public inquiry on five telecom regulations and guidelines in Abuja, said emerging technologies and advancements in the sector, would trigger the Commission to match the development with appropriate regulations and guidelines.

“With the technological advancements anticipated in the coming years, it is expected that there will be a proliferation of devices in the industry. It is, therefore, essential for the Commission to ensure that the right regulatory frameworks can accommodate such eventualities,” Danbatta said.

He listed the regulatory instruments under review at the public inquiry to include Type Approval Regulations, Guidelines on Short Code Operation in Nigeria, Guidelines on Technical Specifications for the Deployment of Communications Infrastructure, Guidelines on Advertisements and Promotions and Consumer Code of Practice Regulations.

He said the focus areas were already articulated in some important documents guiding the operations of the Commission, which include the Nigerian National Broadband Plan (NNBP) 2020 – 2025, the National Digital Economy Policy and Strategy (NDEPS) 2020 – 2030, NCC’s Strategic Management Plan (SMP) 2020-2024 and its Strategic Vision Implementation Plan (SVIP) 2021 – 2025, which are being implemented towards achieving its mandate.

The EVC further stated that the amendment of the regulatory instruments were to reflect current realities, one of which is the anticipated deployment of the Fifth Generation (5G) technology, and management of short codes in Nigeria, including the Toll-Free Emergency Code 112.

Globacom has contributed immensely to boost international connectivity from Nigeria by building and launching an international submarine cable, Glo 1, a project that has been described as massive in Africa. In addition to boosting the provision of services to telecom end users, the facility is currently providing the much needed connectivity to critical sectors of the economy such as oil and gas, manufacturing, banking, commerce, education and health, among others. Several multinational companies, including telecom operators and internet service providers (ISPs), are on Glo 1.

Since the launch of Glo1 in 2010, it has metamorphosed into a leading end-to-end connectivity solutions provider across the globe. The undersea cable from the United Kingdom to Nigeria has the lowest latency in the market. With nationwide terrestrial fiber coverage and presence in all data centers, it boasts a major advantage very few possess in the market. With more undersea cable operators entering the market, the competition is going to intensify. However, the main distinction for Glo1 is that it can address market requirements across all spectrums, i.e. international cable plus national fiber, last mile fiber connectivity using multiple fiber routes for redundancy up to any major data center within Nigeria.

Glo1 is the first successful submarine cable from the United Kingdom through the West Coast of Africa to Ghana and Nigeria. It is also the first such project to be undertaken by an individual company. The 9,800-km-long cable with 169 repeaters originates from Bude in the UK and branches out at Osu landing station, Accra, Ghana, and terminates at Alpha Beach landing station, Lagos. The consumption on Glo1 has increased substantially over the past two years and the team is now focusing on on-boarding the large corporations that are major consumers of internet services.

Globacom commenced Glo1 operations in 2010 with a capacity of 90 Gbps. It was upgraded to 290 Gbps in December, 2018. Within three years, the Glo1 capacity was upgraded to 1Terabit, and according to company sources, before the year runs out, this will be scaled up to over two Terabits.

Over the years, the market dynamics have changed. All major carriers, Over The Top (OTT) operators, which refer to streaming service providers that deliver content over the internet, players such as Facebook, Google and Netflix, multinational companies such as Microsoft, Amazon, Akamai and Alibaba, have set up presence in Nigeria thereby becoming closer to their customers. Over 60 per cent of the capacities on most submarine cables worldwide are utilised by these organisations, and this is the most important target segment that Glo1 is targeting to onboard on Glo network.

With the recent capacity upgrade, Glo1 has on-boarded all major OTT players who have set up shop in the country while talks are ongoing with the companies that are expected to come into Nigeria in 2022 – 2023. Glo1 has sold over 400 Gbps capacities to the OTT players and multinationals in the past 12 months and target to end the year by selling an additional 300 Gbps.

According to Glo1 Team, “With the 4G expansion to tier 2 and 3 cities, Glo1 acts as the catalyst in propagating broadband penetration in Nigeria and acts as an enabler for enterprise customers to provide world class connectivity to all their offices and factories across Nigeria. Many cloud computing companies who cater to the Small and Medium Enterprises (SMES) are setting up shop within the Glo partnered data centers. Using Globacom’s robust terrestrial infrastructure, Glo1 has seized this opportunity to backhaul their traffic to other data centers across the world.”

Setting up Points-of-Presence (PoPs) across key markets such as East and South Africa and mainland Europe are key enablers that will drive data consumption on Glo1 submarine cable. By increasing presence points, Glo1 will be able to carry traffic from every corner of Africa to different parts of the world, the Glo1 Team said.

He said the berthing of Glo1 in 2010, was a monumental step towards realising Globacom’s vision of being the biggest and best telecommunication company in Africa, and that it was a bold and ambitious step never before taken in telecoms business as no one company has undertaken such gigantic project alone.

“Globacom rewrote history in 2010 with the berthing of Glo1, just like we did at launch of Globacom in 2003 when we became the first telecom company to launch on the Per Second Billing platform. With Glo1, we become the first to build an international submarine cable alone.

“The ultra capacity cable connects Africa to Europe and America. Globacom has taken a huge leap to make accessible to Africa the magical possibilities of broadband. The facility brought unprecedented prosperity to our continent. Glo 1 has enabled Globacom and other telecom operators who tapped into the revolution to have a clear distinction in providing quality services to various countries across the globe. It has enabled telecom operators in Africa to interconnect with several international networks and leading carriers in the world,” Adenuga said.

He further said: “In the Phase 2 of this project now being commissioned, the Glo submarine optic fibre cable will connect West Africa to Eastern and Southern Africa. Upon completion, Glo 1 will deliver transmission capacity that will radically change Africa’s economic landscape by providing unprecedented high speed internet services and make telecom services much faster, more reliable and cheaper for consumers. The current and ultimate capacity is enough to cater to the required broadband capacity for at least the next 30 years. It will give impetus to the needed opportunity for Africa to leap forward economically through an excellent communication network and a cost-effective voice, data, video and e-commerce infrastructure. This is a significant step towards bridging the digital divide between Africa and the rest of the world.”

On the economic front, Adenuga said the cable would free up resources for other forms of investments, which governments and businesses needed through broad market coverage at high capacity and at a fraction of cost and time. As a consequence, Glo 1 will facilitate foreign investment and employment opportunities in Africa, Adenuga added.