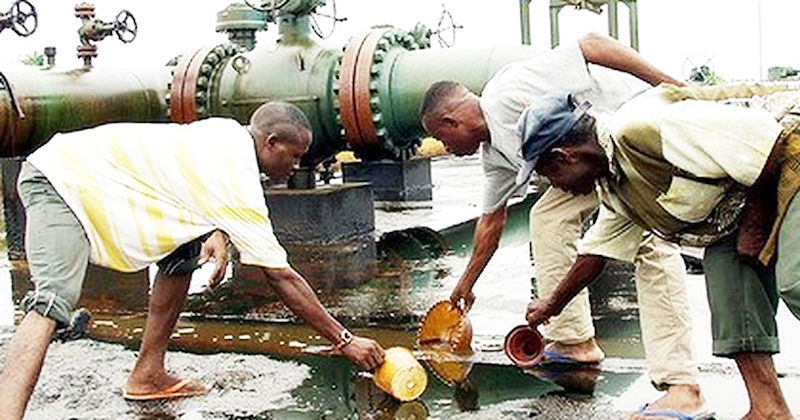 Apart from the policy of the corruption-riddled oil subsidy which has continued to rob Nigeria of huge proportions of its revenue including its foreign reserves, energy industry commentators said it is a thing of shame that relevant agents of government have continued to watch with helpless glee as saboteurs steal thousands of crude oil barrels with reckless abandon.

The reality is that Nigeria has been experiencing some of the worst crude oil theft in its history with millions of dollars lost daily. Several allegations have been made against the ability of security agencies to guard the pipelines. The problem is so nauseating that some have even alleged the complicity of security agencies in the spate of oil theft being experienced.

Recently the Chairman of the Nigerian Upstream Petroleum Regulatory Commission (NUPRC) Gbenga Komolafe, revealed that only about 132 million barrels of the 141 million barrels of oil produced in the first quarter of 2022 were received at export terminals.

Komolafe said: “This indicates that over nine million barrels of oil have been lost to crude theft…this equates to a loss of government revenue of approximately $1 billion…in just one quarter,”

He added: “This trend poses an existential threat to the oil and gas sector and, by extension, to the Nigerian economy if left unchecked.”

To combat the problem of oil bunkering and outright theft of crude oil, Minister of State for Petroleum, Timipre Sylva and his team have continued to tour oil-producing states in recent times.

It was during one such trip that Governor Ifeanyi Okowa of Delta State presented his template for the solution to the revenue losses.

Okowa, who is also the vice-presidential candidate for the Peoples Democratic Party in the 2023 general election, advocated a review of surveillance contracts on oil facilities to involve host communities to check the high rate of oil theft in the country.

He admitted that the challenge of oil theft was huge, given the level it had assumed, but expressed happiness with the steps being taken by the authorities to curb the menace.

“I am glad that we are discussing this hydra-headed issue which impacts directly on our economy and the environment,” the governor said.

According to him, criminality has crept into the dispute between oil companies and host communities.

The governor pointed out that it was often difficult to secure the facilities, especially when the persons given the contracts did not have adequate information on the environment or did not have the buy-in of host communities.

According to the governor, “The surveillance contracts should be tied to performance such that when there are oil thefts you terminate the contract and it is always good that communities are involved because they know the environment better.”

Okowa flayed the oil companies for not keeping faith with their Memorandum of Understanding (MOUs), thereby making stakeholders lose confidence in the system.

He explained that when oil companies failed to sign or implement MOUs, “it becomes very difficult for the state government to mediate when there are issues.”

The other plank of the intervention suggested by Okowa was the need to adequately equip the security in a way that will allow them to defend the territories assigned to them.

“The security agencies must heighten their operations and they need to be resourced to enable them to also increase their level of surveillance and for this to succeed, there must be sincerity on the part of all stakeholders.”

Earlier, Sylva had told the governor that the team was in Asaba to seek the support and buy-in of the state government on measures to be adopted to check oil theft, saying, “as a country we cannot sustain this kind of theft perpetually.”

He said oil theft had become a national emergency, especially as the nation had not been able to meet its OPEC  production quota.

“Our production has dropped drastically to very unsustainable levels; so, we have decided to take the bull by the horn by putting some structures in place and those structures cannot function effectively without the collaboration of the state government,” the minister said.

Analysts maintained that oil theft not only results in a drop in oil revenue for the government but also creates environmental pollution and other health hazards for the host communities.

Just like the case of the three moribund oil refineries which have defied solution notwithstanding the huge amount of money earmarked for their turnaround maintenance by the successive administrations, analysts said it is shameful that a country as big as Nigeria would allow few individuals and groups to continue to steal crude oil for months with reckless abandon.

Observers said more worrisome has been the failure of the Nigerian government to cash in on the current spike in crude oil prices, regretting that while other oil-producing countries are making a kill of the current production quota allocated to oil producers by the Organisation of Petroleum Exporting Countries (OPEC), Nigerian authorities are still at the realm of complaining and counting their losses.

When the delegation visited Governor Hope Uzodimma of Imo State, Sylva disclosed that the country loses 400,000 barrels of crude daily via oil theft.

The Chief of Defence Staff, General Lucky Irabor, who is coordinating the security intervention against oil theft, disclosed that in the last five months security agencies had been dealing with issues of illegal refineries and oil bunkering across the Niger Delta.

The CDS also advocated the engagement of indigenes and host communities in the fight against criminal activity.

On his part, Group Chief Executive Officer of NNPC Limited, Mallam Mele Kyari, said Nigeria currently loses about $2 billion monthly to the activities of oil vandals, with its attendant effect on environmental degradation.

“This has done extensive damage to the environment and losing $1.9 billion every month is colossal, considering the nature of the global economy at the moment,’’ he disclosed.

However, some operators will like to separate crude oil theft from restiveness in the oil-producing communities. According to the Managing Director of Chevron Nigeria/Mid Africa Business Unit, Richard Kennedy, “the issue with crude oil theft should not be confused with host community issues. It is much bigger than that. It is completely different from host community issues. Quite frankly it is organised crime.”

He emphasised that those to be engaged, “must know the geography, the policies, and programmes and the workings in the places they are to operate before engaging them to avoid engaging some of the thieves as security contractors.”

Uzodimma added: “Crude oil theft is run by a cabal and a cartel that are ready always to resist the security agencies. This, in other words, informs that the oil thefts and pipeline vandals are sophisticated in their operations, which means there is a need for strong support to the armed forces and other para-military agencies that are involved in the protection of the Nigerian oil economy.”

Now that the relevant agencies of government responsible for crude oil production and sale appeared to have woken up to their responsibilities, it is hoped that the tempo would be sustained in a manner that will keep saboteurs away from the nation’s resources for the good of all.