Court Strikes out Suit against Olisa Metuh 3 hours ago 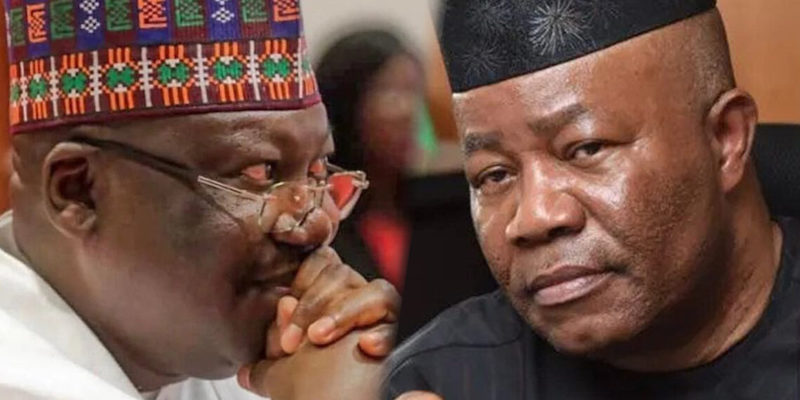 Despite repeated assurances by the Indepdent National Electoral Commission that it has not altered electoral documents in favour of the Senate President, Dr. Ahmad Lawan, and former Minister of Niger Delta Affairs, Senator Godswill Akpabio, concerns have continued to mount over the sincerity of the electoral umpire, Udora Orizu writes

In the last two months, the Indepedent National Electoral Commission (INEC) has engaged in a battle of words with several critics and political analysts who are sure that the electoral body is plotting to reinstate Senate President, Dr. Ahmad Lawan and former Minister of Niger Delta Affairs, Senator Godswill Akpabio as the All Progressives Congress (APC) candidate for Yobe North denatorial district and Akwa Ibom North West senatorial districts come 2023.

While INEC has insisted that Lawan and Akpabio are not included in the list of possible candidates for Senate, critics are accusing the commission of preparing to break the law as consideration for them to participate in the senatorial elections as candidates.

The names of the duo were missing from the list of successfully nominated candidates submitted to INEC by the 18 political parties in June.

Having lost out in their quest for the 2023 presidential ticket of the ruling APC, Lawan and Akpabio on their part are not relenting as they have been making clandestine efforts to claim the senatorial tickets.

While Bashir Machina and Udom Ekpoudom had emerged as candidates in the primaries supervised by INEC officials in their respective senatorial zones, the names of Lawan and Akpabio, who did not participate in the election were instead forwarded to the commission as candidates.

Although Akpabio had won a rerun held in the zone, there was no report of a similar election held in Yobe after Machina had earlier emerged the winner.

In his reaction to the news of Akpabio’s victory, Ekpoudom vowed that he would not relinquish the senatorial district ticket which he won on May 27, 2022 to anyone, no matter the pressure on him. In a statement signed by his campaign Director-General, Hon. Uwem Udoma; Secretary, Obong Etokakpan, and the campaign’s Director of Media and Publicity, Peter Idiong, Ekpoudum described the June 9, 2022 midnight primary that produced the former Minister of Niger Delta Affairs as “scam, unconstitutional, deceitful and legally defective.”

The reaction was re-echo by Machina who contested the primary in Yobe North senatorial district and won. He vowed to go to court to challenge the alleged attempt to steal his mandate. He equally insisted that he was the validly elected candidate, and that he had not withdrawn for any other person.

However, there are fears and speculations that INEC may have doctored documents to allow Lawan and Akpabio actualise their senatorial ambitions despite not participating in APC primaries.

A media report on Tuesday claimed that INEC had backdated Certified True Copies of reports of the APC primaries “to accommodate” Lawan and Akpabio.

But in a statement by its spokesperson, Mr. Festus Okoye, INEC on Tuesday denied doctoring or certifying any document in favour of either of the two APC chieftains. The commission said it had followed through its timetable, adding that there was no point in its schedules where the names of the persons in question were published.

“The forms of the two personalities in question were not published by the Commission. The decision of the Commission triggered legal actions which are still ongoing. It therefore defies logic and common sense to go around and submit doctored documents purportedly recognising the duo as candidates when the matter is clearly sub-judice,” the statement said.

Okoye said the copy of the form uploaded on the online news platform as evidence, was not properly fact-checked and had thereby encouraged misinformation. He called for responsible reporting of the development just as he described the story by the online platform as an unwarranted attack on the electoral body.

“As part of the ongoing case in court, a law firm requested the commission for a Certified True Copy (CTC) of the Form EC9 submitted by the APC as its candidate for Akwa Ibom North West Senatorial District which we are duty bound to oblige them under the law. The Form was certified on 15th July 2022. If minimum care had been exercised by the promoters of the story, they would have seen the two stamps of the commission bearing different dates on the Form. It is this Form that is now misconstrued as INEC’ s endorsement.

“For the record, the Commission has not recognised any of the two personalities as a Senatorial candidate,” Okoye further explained.

INEC had earlier last month sounded a death knell for Lawan and Akpabio’s ambitions following its rejection of their nominations on the grounds that it didn’t monitor the primary elections that produced the two aspirants.

It said only the courts can decide the fate of the two politicians whom many in their constituencies had accused of regarding political positions as their birthright.

In a separate statement by Okoye, the commission said the allegations of underhand dealings against it regarding the two senatorial tickets were intended to impugn the integrity of the commission

For these reasons, Okoye said the commission did not publish the personal particulars of any candidate for the two senatorial districts at variance with the reports, which emanated from the states.

“Right now, the commission is funtus officio in the two cases. Aggrieved parties are at liberty to approach the Federal High Court and seek redress as provided in section 285 of the Constitution of the Federal Republic of Nigeria, 1999 (as amended) and sections 29(5) and 84(14) of the Electoral Act, 2022. On the issuance of Certified True Copies (CTCs) of documents, he said the staff of the commission has been working hard, including weekends, to meet the deluge of requests received.

As of Friday, July 8, 2022, he said the commission had processed 433 requests, involving the certification of 1,662,776 pages of documents. He said many of them were awaiting collection at the INEC headquarters by some of the same applicants complaining of delay in issuance of the CTCs. “Section 29 (4) of the Electoral Act provides that any person may apply to the commission for a copy of nomination form, affidavit, and any other document submitted by a candidate at an election and the commission shall, upon payment of a prescribed fee, issue such person with a certified copy of the document within 14 days. Persons applying for CTC of documents should endeavour to act timely and within the ambit of the law. The commission will continue to uphold the integrity of the electoral process, including the deepening of the deployment of technology to enhance the credibility of elections,” he added.

With this pronouncement by INEC, only the courts can decide the fate of the two politicians whom many in their constituencies had accused of regarding political positions as their birthright.

Perhaps Akpabio’s trouble started when the outgoing state Resident Electoral Commissioner, Mr. Mike Igini, while speaking at a radio programme in Uyo, said the re-run primary that led to his emergence was strange and unknown to law.

According to him, the May 27, 2022 primary, which produced Ekpoudum subsists because it was not cancelled, neither was it rendered inconclusive. He added that Akpabio’s emergence was nothing but a “Nollywood fantasy.”

Igini added that what he knew about Akpabio was that he was a presidential aspirant for the APC, who stepped down for Tinubu, adding that, even if there was a rerun, it could only be conducted for aspirants that participated in the first primary. He advised politicians contesting the 2023 general election to meticulously study the new provisions of the 2022 Electoral Act as amended, so as not to continue with the hope that things were still the way it were with the repealed 2010 and 2012 Electoral Act.

“By virtue of Section 31 of the 2022 Electoral Act, the only way somebody can be replaced in any form is that we no longer have substitution by political party. What you have now is withdrawal by individual or nominee and or death,” Igini reportedly explained.