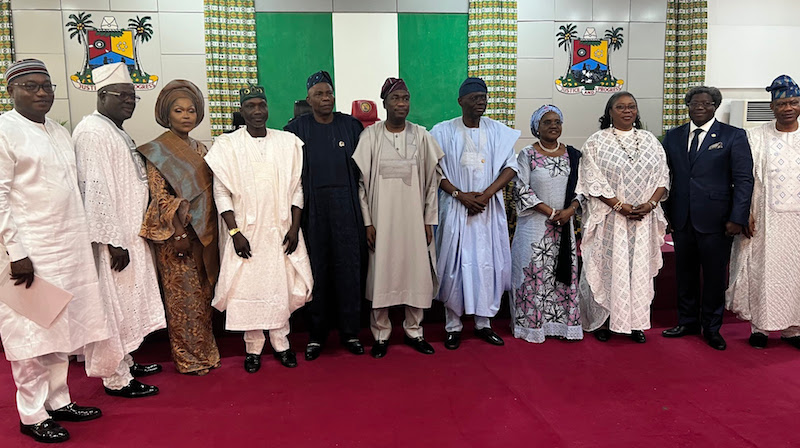 The new members were appointed into the cabinet rank of Special Advisers.

They were sworn in at an event held in the State Banquet Hall in Alausa.

According to a statement, five of the appointees were newcomers, who filled in vacant positions, following the voluntary resignation of previous occupants.

Two, who previously resigned from the cabinet, were returned to take back their positions.

Until his new appointment, Giwa was the Senior Special Assistant on Central Business District (CBD) to the Governor.

Sanwo-Olu said his government considered seamless continuity in governance important, as he charged the new cabinet members to hit the ground running in delivering more electoral promises of the administration to the residents.

The governor said the new cabinet appointment further reinforced the established tradition of diversity and inclusiveness, stressing that the choice of the appointees was informed by capacity, accomplishments, commitment and proven track record of hard work and professionalism in their previous endeavours.

Sanwo-Olu said: “Today, we are bringing in new Special Advisers to replace those who voluntarily left the State’s Executive Council in previous months to pursue their political ambitions. As cabinet members, you join a small but privileged class of people whose ideas and decisions go a long way towards impacting the lives of millions of Lagosians on a daily basis.

“Your appointment is a testament to your capacity, your accomplishments and your track record of hard work, commitment, dedication and professionalism in your private and public endeavours. Your role, as you might have imagined, is a demanding one, requiring intense levels of hard work and dedication. You are expected to hit the ground running, especially considering that we are in the final year of our first term in office.”

The Governor reminded the new cabinet appointees of the need to get themselves familiarised with their assigned portfolios in order to sustain and improve on the tempo of their predecessors, noting that their entry into the Council came in the last lap of the administration’s first four-year mandate when the State was consolidating on the programmes across the T.H.E.M.E.S areas.

Sanwo-Olu praised the State’s legislature, led by Rt. Hon. Mudashiru Obasa, for granting an accelerated approval for the appointment of the new members.

The Governor said: “Let me remind you all that this appointment must not be seen as an opportunity for self-service. While you discharge the responsibilities that will be assigned to you, you must imbibe our culture of transparency, accountability, fairness and value for money. You must show exemplary leadership as the necessary virtues needed to achieve the greatness we desire for our State and to deliver the prosperity our people deserve.”

Benson-Awoyinka, who delivered the acceptance speech on behalf of the new appointees, appreciated the Governor for his faith in the appointees’ ability, pledging to work with Sanwo-Olu to deliver the Lagos of citizens’ dream.