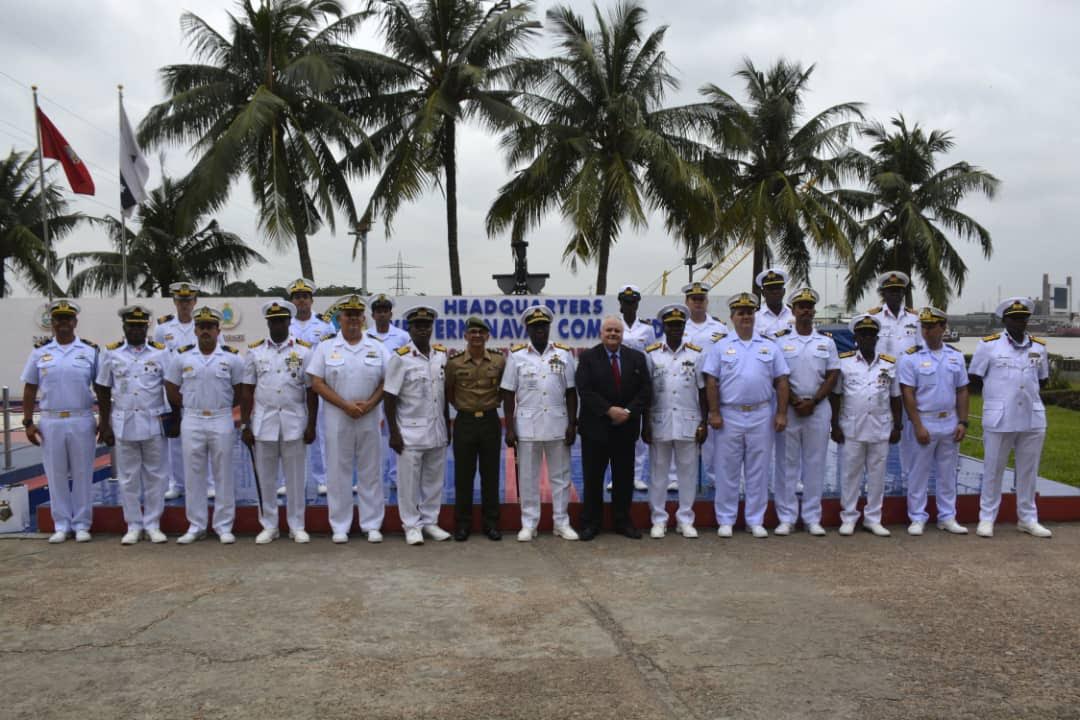 This was part of exercises and drill earmarked for the port call made by the Brazilian Frigate to Nigeria.

Amongst other things, the visit was aimed to improve maritime security in the Gulf of Guinea and relations between Nigeria and Brazil, whilst ensuring secure passage for commercial ships.

But prior to the exercise, the Brazilian team, led by Ambassador Francisco Carlos Soares Luz, the Consul General of the Consulate of Brazil in Lagos, paid a courtesy visit to the Flag Officer Commanding (FOC), Western Naval Command (WNC), Rear Admiral Yakubu Wambai.

Stressing that the Brazilian frigate was in Nigeria for collaborative exercises to preserve security in the Gulf of Guinea, the ambassador said: “Due to the fact that Brazil and Nigeria share the same ocean, this is quite significant for Brazil. Just on the other side of the Atlantic, as it were.

“We have a responsibility to maintain the neighborhood’s safety as neighbours. This is my second time taking part. And I hope that we continue to work together in the upcoming years and that this will become an annual event.

“The military component was initially quite strong in our cooperation, which began when we recognized Nigeria’s independence in the 1960s. Currently, there is a return of our previous mutually beneficial relationships.

“We made more of an effort to reopen our defense attaché office in Abuja, and this is beneficial for training and taking part in joint operations. Brazilians have begun traveling to Nigeria for training sessions because of this”.

Also speaking, the Task Force Commander, Captain Leta Basil, said:  “We have our helicopter, frigate, and special group operation right here. We are here to collaborate with Africans.

“Before arriving here, we visited other nations. In order to improve our force and exercise, we have been performing workouts with the participants. We are practicing boarding procedures, maneuvers, and helicopter operations.”

In his response, the FOC West regaled the visitors about the efforts of the navy in securing its maritime domain, which has paid off with the latest IMB report of no piracy in the nation’s waters.

He also harped on the need for collaboration in developing the skills of the NN, adding that whatever knowledge and experience gained would enhance operations aimed at maintaining a secure marine environment.

“The Navy is the only branch of the armed forces that visits the armed forces of other nations with its equipment and is warmly welcomed. Navies internationally, have a standard duty, which is diplomacy.

“Therefore, the tour is to Nigeria as a whole rather than just the Western Naval Command. We are receiving them militarily as part of our ongoing mission to ensure that our seas are safe.

“Like the Consular General said, we are on opposite sides of the Atlantic Ocean; they are to the west of us. Therefore, it is something that unites us all.

“They are impacted if anything goes wrong here. They are therefore returning, just as they did the previous year. To maintain the cooperation we have had since our freedom, they have now arrived with a second ship. Everyone is involved in security.”