Okowa: I Got Second Best Result in 1976 in WASC as Obi, Baba-Ahmed Move to Seal Ticket 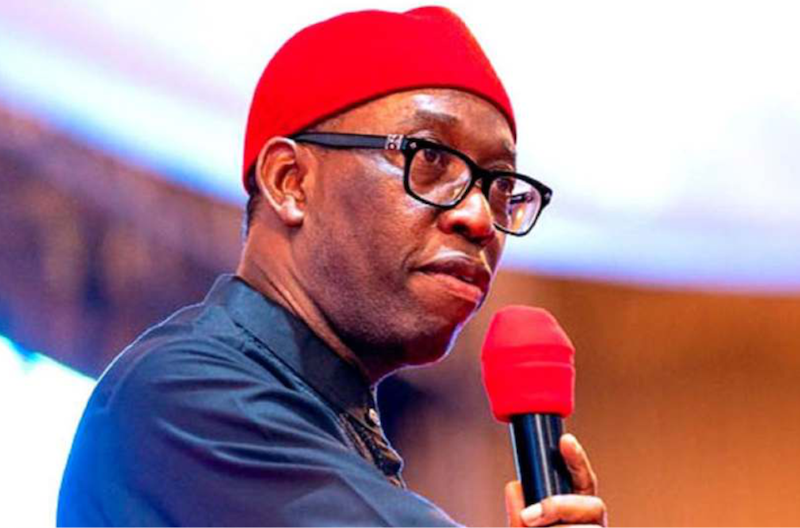 •Cracks in universities’ union as UNIMAID medical lecturers pull out

Delta State Governor and Vice-Presidential Candidate of the Peoples Democratic Party (PDP) in the 2023 elections, Dr Ifeanyi Okowa, yesterday, said the media buzz generated over his missing West African School Certificate (WASC), was not a big deal but merely an attempt by some people to play politics with practically everything, because he got the second best result in his WASC in 1976.

This, however, is coming against the news of moves by the Presidential Candidate of the Labour Party, Mr. Peter Obi, to seal a deal that would see him pair with Datti Baba-Ahmed, a Kaduna-based politician and economist, as his substantive running mate.

Okowa, who admitted to losing his secondary school certificate nand added that his alma mater, Edo College, Benin-City, Edo State, had clarified the matter by printing out his ordinary and higher levels examinations results, however, noted that his HSC result was the second best in Nigeria at the time.

The governor, who also spoke on the ongoing strike by the Academic Staff Union of Universities (ASUU), called on the federal government to expedite action in resolving the issues, adding that every government should be sincere enough to keep to promises and agreements at all times.

Interestingly, the long drawn industrial action, might have taken a new dimension as some lecturers at the College of Medicine, University Maiduguri, had opted out of the strike.

But, in laying the certificate matter to rest, the vice-presidential candidate of the Peoples Democratic Party (PDP) further said it bothered on mischief for anyone to say he had no WASC certificate from the examination he sat for in 1976.

Okowa made the clarification, when he inspected ongoing projects at the Delta State University of Science and Technology, Ozoro in Isoko North Local Government Area.

His words: “On the issue of my certificate, I think it is a misconception. People try to play politics with everything. Yes, I lost my WAEC certificate, but I have the print out from Edo College, Benin-City, which clearly stated that I have distinction in all subjects.

“The Higher School Certificate was attached and it has been acknowledged by Edo College and the school put it out there that I made an ‘A’ `B’ `B’. I do not pride myself but it was very difficult to make such grade in higher school at that time.

“My high school result was the second best nationally in 1976, when I finished. So, many universities admitted me through Telegram as at that time, and I had to start making choices of which to accept.

“Of course, it’s very clear that I finished medical school at the University of Ibadan. I was 21years and some months; I was less than 22 years of age.”

On the ongoing strike by the Academic Staff Union of Universities (ASUU), the governor called on the federal government to expedite action in resolving the issues, adding that every government should be sincere enough to keep to promises and agreements at all times.

“We continue to sympathise with our students, who have been at home for several months now rather than being in school. I use this opportunity to call on the federal government to do something urgently to end the strike.

“It’s not a good thing for the children, parents and even education in general. It is unfortunate that the federal government, has not been able to attend to issues, as requested by ASUU.

“For every government, if promises are made, we must ensure that we keep to our promises and if there are things that cannot be done, you let people know,” he said.

Okowa noted that lecturers were not on strike in the four universities owned by the state, stating, “For us in Delta State, we are fulfilling all the requirements and that’s why you can see that this university and our three other universities are all active and in session, because we do not have any issues with our lecturers.

“All our four universities are in session, because we pay special attention to education in Delta State, and our presidential candidate, Alhaji Atiku Abubakar, has also assured that education occupies a prime position in our ‘Rescue Nigeria’ mission.”

He expressed satisfaction with the management of the university in Ozorro for successfully admitting 1,850 students in the first year, disclosing that no fewer than 3,000 applicants chose the university as first choice in the new session, starting October.

The governor also commended the authorities of the university for using the engineering students of the school to execute some projects in the school.

According to Okowa, “We walked through some concrete paved roads executed by the university with engineering students and it is very encouraging that they are putting their students to practice and their lecturers also have the opportunity to practicalise what they teach.

“You will recall in the same manner, when the school was a polytechnic that they used their students and their engineering staff to build the stadium in the campus.

“This is very encouraging, because it is important that we actually ensure that our students are not only groomed up in theory but also put to practice what they learn and that’s exactly what we look forward to.”

With the July 15 deadline for the substitution of candidates inching close, Presidential Candidate of the Labour Party, Mr. Peter Obi and a Kano-based economist and politician, Datti Baba-Ahmed, might have closed the deal to pair on Labour’s presidential ticket.

THISDAY gathered that Baba-Ahmed and Obi, spent the better part of last night meeting with some northern elders and other crucial Nigerians on the viability of their combination, with indications that the coast was almost clear for the duo.

Inside sources hinted THISDAY that discussion is likely to be concluded this morning, as Baba-Ahmed, a former governorship hopeful in Kaduna State, has already given Obi a green light, but waiting for the endorsement and approval of the certain northern elders.

To beat deadline set by the Independent National Electoral Commission (INEC), Obi had submitted the name of a former presidential spokesperson, Dr. Doyin Okupe, as a place holder, pending the determination of a suitable partner.

The former Anambra State governor, has since been consulting on the options before him, including playing with the possibility of an alliance with the New Nigeria People’s Party, whose presidential candidate, Rabiu Kwankwaso, would rather Obi were his running mate.

But that understanding broke down irretrievably, prompting the choice of Baba-Ahmed, which many see as suitable for the combination and in sync with current yearning by Nigerians.

Cracks in ASUU as UNIMAID Medical Lecturers Pull Out

Meanwhile, lecturers at the College of Medicine, University Maiduguri, have opted out of the long drawn industrial action by other lecturers in the nation’s public-owned universities.

This, nonetheless, the ASUU leadership has blamed the federal government as responsible for the continued closure of the institutions.

ASUU President, Prof. Emmanuel Osodeke, who spoke to THISDAY in a telephone interview, yesterday, said the government had been dillydallying with the issue convening a meeting to resolve the crisis in the tertiary institutions.

He said: “It appears the government has no intention of ending the impasse soon. We have finished negotiations with the Prof. Limi Briggs Committee and what is expected is for the government to summon a reconciliatory meeting.”

On the issue of the salary payment platform, Osodeke said, ASUU’s preferred platform, the University Transparency and Accountability Solution (UTAS), has gone through all stages of integrity tests by the Nigeria Information Technology Development Agency (NITDA), but that the agency was yet to make its report public.

The lecturers also requested for payment of withheld salaries

Interestingly, however, as the strike by the ASUU members entered its fifth month, there seems to be division among the lecturers with those in medical schools of some federal universities, distancing themselves from the ongoing industrial action.

In a letter to the Minister of Education, Adamu Adamu by the Medical and Dental Consultants Association of Nigeria (MDCAN), University of Maiduguri Teaching Hospital (UMTH) branch, the lecturers said they never joined the strike and consequently, requested for the payment of their withheld salaries from March 2022 to June 2022.

The lecturers also wrote to the Minister of Labour and Employment, Senator Chris Ngige, as well as the Minister of Finance, Budget and National Planning, Zainab Ahmed in this respect.

The letters signed by the Assistant Secretary of the union, Dr. Mohammed Adam Sheik Abdulahi, seen by THISDAY and titled, “Request for payment of our withheld salary from March-June 2022,” was dated June 29, 2022.

In the move seen as a ploy to break the ranks of ASUU, the medical lecturers stated that they had been doing their work, “which includes teaching, training and conducting examination of medical students throughout the period of the ongoing strike.”

They drew the attention of the minister to their earlier correspondences in March with the Provost, College of Medicine and Vice Chancellor of the University of Maiduguri, notifying them of their resolve to remain at work, notwithstanding the strike declared by ASUU.

The medical lecturers, therefore, appealed for the kind intervention of the minister to encourage their patriotic members continue their services for the good of Nigerians by paying their salary arrears.

The Minister of Education, Adamu Adamu could not be reached by THISDAY at the time of filing this report.

A source in the Education Ministry said, they had verified that medical lecturers were teaching and that Usman Danfodio even graduated medical doctors in March /April.

Another source, who is a senior official of the Ministry, showered praises on the lecturers for their patriotism and assured them that their withheld salaries would be paid as soon as possible.

“Theirs is an act of patriotism. Persistent strike by lecturers is at the base of poor grading of Nigerian universities and part of the reasons for the falling academic standard. How I wish others will emulate them, who have decided to remain in the classroom while the numerous challenges facing higher education are sorted out,” the source said.

One of the medical lecturers, who preferred anonymity, further confirmed that their members have not been participating in the ongoing industrial action, adding that they were concerned about the deleterious effect of incessant strikes on the quality of education in Nigeria.