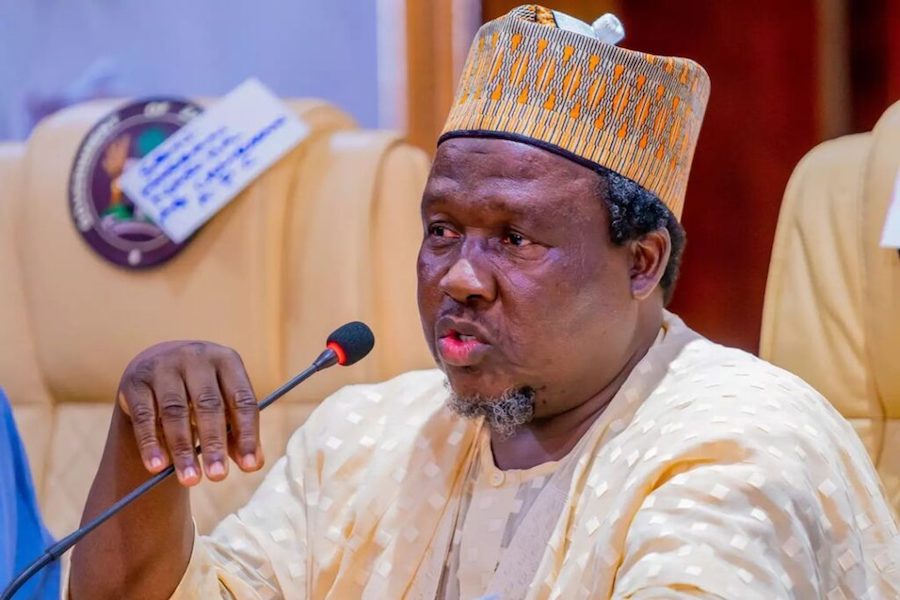 In a strange coincidence, documents submitted by the vice presidential candidate of the ruling All Progressives Congress (APC), Mr. Ibrahim Masari, to the Independent National Electoral Commission (INEC) have revealed that the placeholder, like the principal candidate, Senator Bola Tinubu, could not also produce requisite certificates to back his stated academic qualifications.

But Imo State Governor Hope Uzodinma said the certificate debate around his party’s presidential duo was of little or no importance, stressing that Tinubu’s past electoral records would suffice.

However, the Action Alliance (AA) asked a Federal High Court to restrain INEC from including APC and its candidates on the ballot for the 2023 presidential election.

In an effort to meet the deadline for the submission of nomination forms of presidential candidates for next year’s election, Tinubu, who won the presidential ticket of APC, had announced Masari as his running mate. But there were plans to substitute him within the substitution window in the electoral guidelines.

Masari is a Muslim from Katsina State in the North-west geopolitical zone, where the current president, Muhammadu Buhari, hails from.

The choice of Vice President has become a tough one for Tinubu, following the strong division in the country along religious and ethnic lines. He said recently at the 60th birthday ceremony of Speaker, House of Representatives, Femi Gbajabiamila, that he was still searching for a substantive partner, provided Masari voluntarily resigned in line with the new electoral laws.

However, the Form EC9 bearing Masari’s particulars revealed that he did not attach any certificate in support of his educational qualifications. Masari, rather, attached a sworn affidavit claiming the loss of vital documents, including his school certificates.

According to the court document sighted by THISDAY, Masari claimed to have lost his certificates alongside other documents last July in Abuja.

The sworn affidavit deposed to at the Supreme Court, Abuja, read in part, “That sometime in January 2021, while on transit within Wuse Area, FCT-Abuja, I discovered that my original Certificate of Occupancy (C of O) of Plot, No. KT 17522, GRA, Katsina, Katsina State; Certificate of Kaduna State Development Centre from 1994 – 1995; Grade ll Certificate from Katsina Teachers’ College (KTC) from 1978-1983 and First Leaving School Certificate, issued by Masari Primary, Katsina State, from 1972-1978, got lost.”

Masari added that all efforts to trace the documents proved abortive, hence, the affidavit.

Tinubu’s Form EC9 published by INEC last Friday, which revealed that the APC presidential candidate did not fill the column for his primary and secondary school education, had generated a lot of controversy, with some political parties and groups threatening to go to court. The felt the APC presidential candidate could not have left the two spaces blank after listing his primary and secondary schools, with dates attended, in his Form CF 001 for the governorship election in 1999 in Lagos State.

But Tinubu had explained that he could not explain the whereabouts of his certificates after soldiers invaded his house while he was in self-exile during the fight against military regime in the country, post-June 12, 1993 presidential election annulment.

Imo State Governor, Senator Hope Uzodinma, said those pushing the certificate saga against the APC presidential candidate, Bola Tinubu, were merely trying to create an issue out of a non-issue.

Uzodinma said Tinubu, having contested in three different elections in the past, did not need to make fresh submissions if the record keeping system of the electoral body was efficient.

He said, “Well, all the things so mentioned are entirely party challenges that will be resolved. But, for my presidential candidate, the issue of a certificate shouldn’t even arise. In 1999, he contested elections and became the governor of Lagos, and in 2003, he contested the election for second-term governor of Lagos.

“He ran and won as a senator in the country. Where record-keeping is efficient, and INEC server functional, he doesn’t need to do a fresh submission. However, if whatever he is supposed to submit is not handy, it is not late yet. I’m sure before that time, he will submit whatever is required of him.”

Uzodinma also dismissed speculations that APC was on the verge of losing its majority status in the National Assembly over the looming defection of their lawmakers.

He stated, “Did some leave the party or are leaving the party? Until they leave. But for those few, who left, of course, there are some others, who left other parties and joined the APC. So, one cancels the other.”

On allegations levelled against him by his political adviser that he was running a closed government, the governor said, “You know, politics and leadership is a business that thrives on ideology. Sometimes, you hire aides, who by our primary assessment, you think would be able to fit into the ideology and your vision for your people.

“So, if the way things are going, to the best of their idiosyncrasies, is not consistent with the thought process, it means that they are licensed to try their luck in another place.”

Asked if he had paid the N27 million he was said to owe his former aide, Uzodinma said, “So, this aide, who accused his boss of non-inclusiveness. Unfortunately, we’re not running a limited liability company, where shareholders must all vie for…

“I accepted his resignation and I wish him the best of luck in his future endeavours and that brings the matter to a close. I don’t know how I will owe N27 million to an aide; you are talking about my political adviser, I don’t know what he sold to me that I bought?”

Appraising the security situation in his state, Uzodinma said bandits had started laying down their arms and surrendering to the authorities.

The governor, who spoke with newsmen on Tuesday after meeting with President Muhammadu Buhari at State House, Abuja, said the ultimatum he gave armed gangs to lay down their arms had started yielding fruit.

He said, “Only two days ago, I have already called on the criminal gangs in Imo State, the unknown gunmen and bandits, who are hiding in one way or the other, forests and in the bushes to come out and I granted a 10-day period, during which if they come out and lay down their arms, we will grant them pardon.

“As at this morning, I’m told that some people are already surrendering their arms. It is good a development, because we have to attack the situation from all fronts and ensure that innocent citizens are not molested.”

Uzodinma, however, maintained that the security situation in his state had not degenerated to the level of individuals carrying arms. He said, although he was not in Zamfara State, where Governor Bello Matawalle ordered self-help, and could not say exactly why the government was making the move, his own administration was in control of the security situation in Imo State.

Uzodinma said the security situation in the state had greatly improved and there would not be any need for individuals to carry arms as a form of self-defence.

He said, “I’m not in Zamfara State to know what exactly is the situation. However, I don’t think that the security situation is beyond our security services.

“In Imo State, the security agencies have risen to the occasion and we’re in charge of the security and, like I told you earlier, the agencies are working in synergy and the situation has been controlled to the barest minimum.

“Currently, businesses have resumed and people are going about their day-to-day businesses without any molestation. So I think that we’re all working in one accord to ensure that, nationally, the security situation has improved.”

The Action Alliance (AA) filed a case at a Federal High Court seeking to restrain INEC from including APC on the ballot for the 2023 presidential election. AA also asked the court for an order restraining the electoral umpire from accepting the name of Senator Bola Tinubu as candidate of APC in the forthcoming presidential election.

The plaintiff, in the Writ of Summon, marked, FHC/ABJ/CS/954/2022, predicated its request on the claim that both APC and Tinubu were not qualified to participate in the 2023 presidential election because of alleged forgery committed by Tinubu in 1999.

The suit filed on behalf of the plaintiff by its lawyer, Mr Upkai Ukairo, claimed that Tinubu forged his University of Chicago certificate he submitted in 1999 in aid of his qualification for the 1999 governorship election in Lagos State, which he won.

The suit, dated and filed June 21, had INEC, APC, and Tinubu as first, second, and third defendants, respectively.

In a 16-paragraph statement on oath deposed to by one Kalu Agu, the plaintiff submitted, “The third defendant is a person, who is not qualified for election to the office of President of Nigeria on the grounds of alleged forgery.”

According to the deponent, the third defendant provided false information and attached forged documents in the Form CF 001 he submitted to INEC in 1999 in aid of his qualification for the governorship poll.

Agu stated that the claim by Tinubu that he possessed BSc degrees in Economics and Business Administration from the University of Chicago and Chicago State University in 1976 and 1979, respectively, were false.

“The third defendant knew he did not possess all the educational qualifications he listed in the said INEC form,” Agu added.

The deponent further claimed that the matter of false information by Tinubu was once reported to the Inspector General of Police and the Lagos State House of Assembly, wherein the latter set up a committee, which in its report on Page Two, stated , “The governor of Lagos State stated his evidence by admitting full responsibility for some of the needless errors being pinpointed in recent publications and which formed the basis of the allegations against him.”

The plaintiff contended that, arising from the above, the third defendant was not qualified for election into the office of President of Nigeria, and, therefore, prayed the court to declare that the third defendant’s claim that he attended Government College, Ibadan, and University of Chicago in his INEC Form CF 001 in 1999, which he presented to INEC, was false.

He also urged the court to further declare that the alleged false information on Tinubu’s INEC Form CF 001 about his BSc degree in Economics from the University of Chicago “is a forged certificate”.

The plaintiff said in view of Section 137(1)(j) of the 1999 Constitution, the court should declare that the third defendant, “Having in 1999 presented a forged certificate to INEC, is not qualified to contest for the office of president.”

He sought, “A declaration that by virtue of Sections 224, 23 and 24 of the 1999 Constitution and the Constitution of the APC, the office of the President of Nigeria is to be occupied by a man of integrity and impeccable character.”