I Had Trying Times in Kano, Says INEC Commissioner  10 mins ago

I Had Trying Times in Kano, Says INEC Commissioner 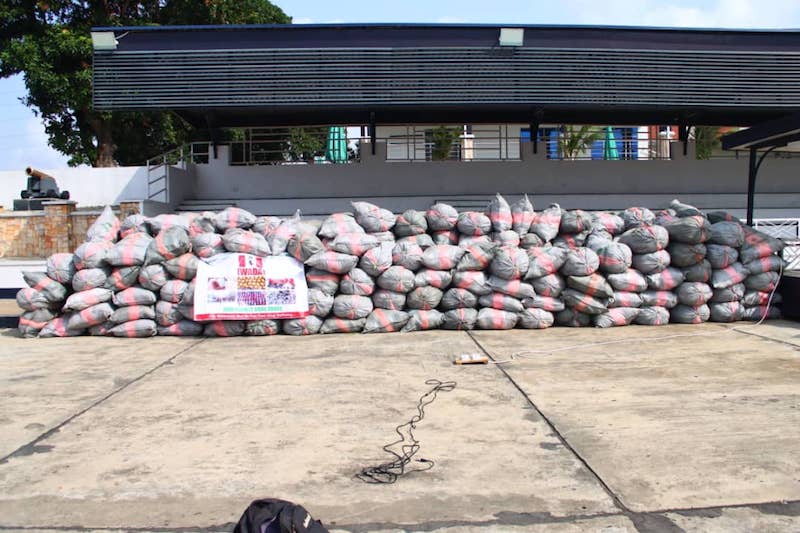 As part of measures targeted at dissuading drug traffickers from indulging in such act, the Nigerian Navy Patrol Team recently intercepted a wooden boat and seized Cannabis Sativa bagged inside sacks estimated to worth over half a billion naira. The illicit drugs were recently handed over to NDLEA, which is the lead agency for drug-related crimes, Chiemelie Ezeobi reports

Without stating the obvious, one of the responsibilities of the Nigerian Navy (NN) is to make the maritime waters free from crime in all ramifications whether piracy, smuggling, illegal fishing, crude oil theft, pipeline vandalism and bunkering.

In line with that objective, the NN recently intercepted a boat with piles of bags containing Cannabis Sativa (Indian Hemp) estimated to worth about half a billion naira-N500 million to be precise.

After preliminary investigations, the navy handed over the 463 large sacks to the National Drug Law Enforcement Agency (NDLEA).

At the recent handover to NDLEA, Commander, Nigerian Navy Ship (NNS) BEECROFT, Commodore Malami Haruna, said the illicit drugs were intercepted from a boat on May 21, 2022, during the routine sea patrol conducted by the Nigerian Navy Special Boat Service (NNSBS) off Lagos Fairway buoy, adding that the suspects on sighting the naval patrol boats jumped into a speed boat and sped off.

He said: “At about 1AM on Saturday, May 21, the Nigerian Navy intercepted a boat laden with contraband suspected to be cannabis sativa popularly known as Marijuana.

“The interception was done during the routine sea patrol conducted by the Nigerian Navy Special Boat Service (NNSBS) off Lagos Fairway buoy. The suspects on sighting the patrol boats jumped into a speed boat and sped off. Though the suspects are at large, efforts are being made to apprehend them.

“However, the boat laden with the contraband was towed to the Base for further investigation. Our preliminary investigations revealed that the boat was loaded with about 463 large sacks of compressed Marijuana worth more than N500,000 in the local market amongst other items.”

On why the drugs were handed over to the NDLEA, he said it was “in line with extant regulations for the arrest and handover of suspects and evidence to appropriate agencies”, adding that the

“prevention of such large quantity of hard drugs from entering the Nigerian society would serve to reduce drug intake that lead our youths towards committing crimes in the society.

“It has also deprived the owners of the contraband the funds to sustain their operations. Accordingly, I would like to use this avenue to warn drug traffickers and other economic saboteurs that the Nigerian Navy under the leadership of Vice Admiral AZ Gambo AM maintains zero tolerance to criminalities and will not relent in its drive to rid the nation’s maritime space of all illegalities such as drug trafficking and oil theft amongst others”.

Also speaking, NDLEA Maritime Commander, Isaac Uzah, who received the seizure, commended the navy for supporting the war against transnational crimes and assured that the agency would continue to strengthen existing collaboration between the NDLEA and the Nigerian Navy to achieve greater efficiency and curb illicit drug trafficking.

“Our gathering today is another milestone in our collaboration with the Nigerian Navy. The navy is one of the agencies of government that are supporting the war against transnational crime, especially drug trafficking.

“The maritime domain is not only large but it is complex and challenging. Despite the challenges, the Nigerian Navy is living up to expectations. Specifically, with the NDLEA and upon my assumption of duty from January, the Navy has made massive arrests at sea.

“On the January 11 and 27, 2022, they handed over 261 and 268 bags of cannabis respectively and today again, we can see the massive seizure which is over 463 bags. So, the seizure and arrest speak volume in our relationship with the Nigerian Navy.

“From the second seizure, 20 Ghanaian suspects were apprehended and handed over and they are facing prosecution at the Federal High Court. So, we thank the navy for complementing the efforts of the NDLEA,” he said.

Uzah also added that the two Epenal boats recently handed over to the NDLEA by the navy will boost the agency’s marine unit operational efficiency and capacity in its fight against drug trafficking and abuse.