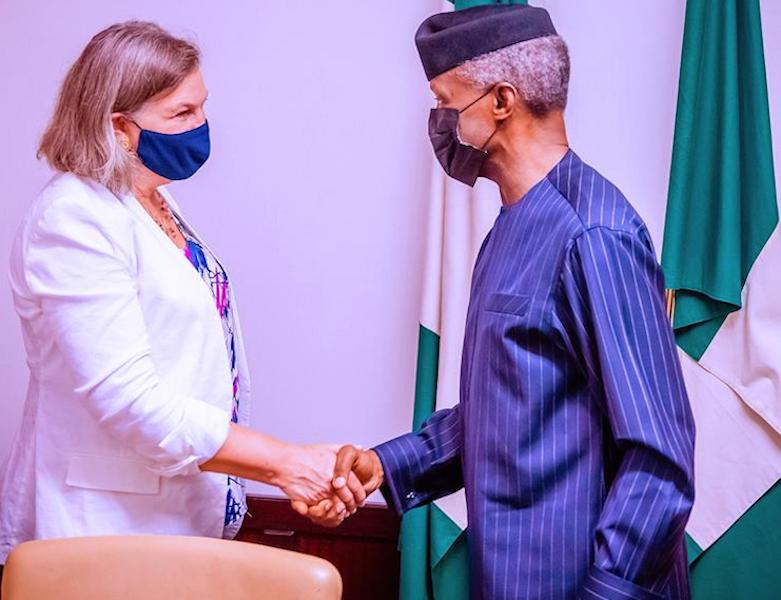 Deji Elumoye in Abuja
Vice President Yemi Osinbajo has called for a concerted efforts between Nigeria and the United States to effectively tackle the spread of terrorism, especially in the Sahel region.Speaking while playing host to the Under Secretary for Political Affairs, US State Department, Victoria Nuland, alongside a US delegation including its Ambassador to Nigeria, Ambassador Mary Beth Leonard, Osinbajo stressed the need for a free, fair and peaceful elections, improving security in the Sahel region, and the adoption of gas as a transition fuel in developing countries.

Highlighting the need for a more comprehensive approach to tackling terrorism in the region and Sahel, the Vice President noted that the spread of terrorist organisations such as ISWAP, and Boko Haram should be tackled ‘firmly and permanently.’Commending the US government for providing support to Nigeria in its fight against Boko Haram and terrorism – with the delivery of the first batch of Super Tucano jets and the proposed purchase of 12 AH-1Z Cobra attack helicopters to Nigeria, Osinbajo said the cooperation between the two countries has been “extremely fruitful and rewarding, especially for us.”

His words: “So far, we have seen peaceful elections in the primaries… and as we go along, we will get a firmer grip of the security issues; we must thank you for the cooperation of the American government, that we see so far”.
Restating the need to designate gas as a transition fuel in the global net-zero emissions target by 2060, Osinbajo noted the importance of climate financing in helping African countries tackle the effects of climate change and poverty.

Also highlighting Nigeria’s energy transition plan, which proposes the adoption of gas as a transition fuel, the Vice President said “we cannot afford at this point, to defund gas projects in developing countries, especially countries such as ours where we have huge hydrocarbon and gas deposits and made a way for us to transit, and at the same time address poverty and other challenges. This is an area I think we can also work jointly and collaboratively in seeking solutions.”

Earlier in her remarks, the US Under Secretary for Political Affairs, Victoria Nuland, acknowledged Nigeria’s advocacy for the use of gas as a transition fuel.

According to her: “You are absolutely right about gas; I’ve worked a lot on the response to Russia’s war in Ukraine and the Europeans now understand as they try to cut their dependence on Moscow that they need alternative democratic sources of gas and they are waking up to the fact that Nigeria and others countries can fill that gap needed”.

She also commended the Vice President for his role in the country’s economic development and the green transition.

“I also want to underscore your role in the economic development of the country and the green transition. And I hope you will give us a sense of the work that you are undertaking now as you strengthen Nigeria’s future obviously through a gas transition to a solar and other green superpowers on this continent and beyond.”

Underscoring the important bilateral relations between the US and Nigeria, Nuland further noted that it was “crucial that Nigeria’s democracy continues to prosper and grow.”

“We have been talking a lot about the upcoming elections and President Buhari’s very important and courageous decision to facilitate a peaceful transfer of power. And we very much look forward from the United States in supporting free, fair and peaceful elections.

“We have to commend the fact that the Government and the President have been sending the message that this needs to be a free and fair election, one that heals and binds the country and one that is safe and secure.”