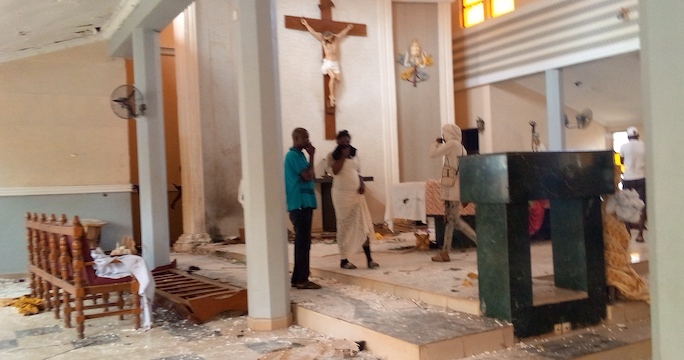 Onyebuchi Ezigbo in Abuja
The Catholic Church has expressed sadness over the gruesome attack on one of its parishes, St. Francis Xavier Catholic Church, Owo, Ondo State by gunmen.

In a statement signed by the Director of Social Communication at the Catholic Diocese of Ondo, Rev. Fr. Augustine Ikwu, the attackers stormed the church during mass, shooting randomly and leaving unspecified number of persons dead and others injured.

The statement said: “It is Pentecost Sunday, a time every Catholic is expected to be in Church to commemorate the Solemnity. It is so sad to say that while the Holy Mass was going on, men of unknown origin, wielding guns attacked St. Francis Xavier Catholic Church, Owo, Ondo State.

“Many are feared dead and many others injured and the Church violated. The identity of the perpetrators remains unknown while the situation has left the community devastated.”

It said that security agencies have been deployed in the community to relatively handle the situation.
According to the statement, “At this point in the history of our dear country Nigeria, we need God’s ultimate intervention to restore peace and tranquillity.”

The church however said that all the priests in the parish are safe and none was kidnapped. “The Bishop of the Diocese is also with them at this trying time. Let us continue to pray for them and the good people ofOwo and the state at large.

“We turn to God to console the families of those whose lives were lost in this distressing incident, and we pray for the departed souls to rest in peace. Amen.

“The Bishop appeals that we remain calm, be law abiding and pray for peace and normalcy to return to our community, state and country,” it said.