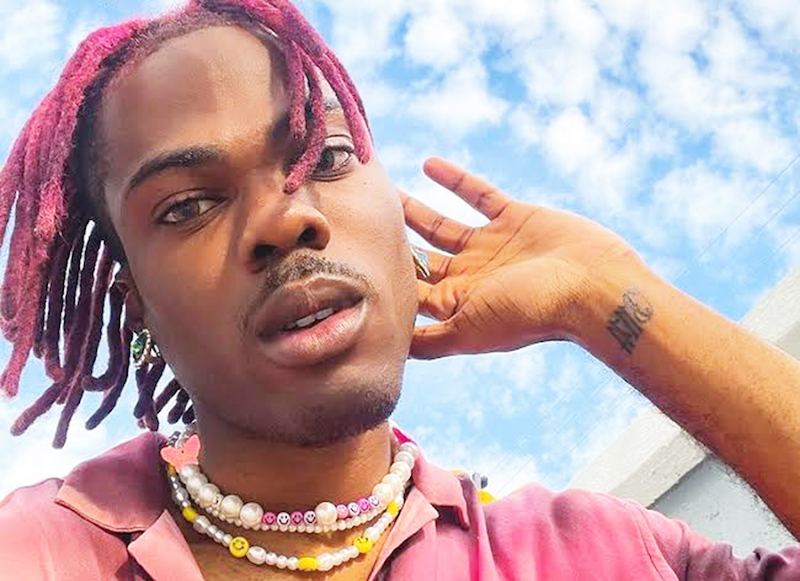 As an aspiring singer-songwriter whose parents are both medical doctors, CKay’s biggest risk was not to leave his family and friends in Kaduna to chase his music dreams in Lagos. It was making a song whose chorus has no words but only an “ah ha han ha ha” chant and expecting it to be a hit. The song “Love Nwantiti” was meant to be a freestyle, one he recorded late at night. Tired, he thought he’d write a proper chorus in the morning. All this happened in his living room—not a recording studio. The next day, he decided the song was just right the way it was, but almost everyone disagreed with him. The year was 2019.

A quick rewind to 2014: he contemplated moving to Lagos from Kaduna to focus on his music career, one that was disapproved by his parents. In 2016, he was signed by Chocolate City after his song “3rd Mainland Bridge” caught the music executive and rapper MI’s attention.

At that time, CKay was earning a living as a music producer, so it was initially hard to convince people that he could sing.

In an interview in Lagos, CKay said, “Lagos is the place to be; all the media, brands, and record labels are in Lagos.” He is a true Nigerian, having traversed the three major ethnicities. He is from the east, grew up in the north, and made his musical money first in the west.

By 2020, he finalised his plans to release an EP that included the song. The label that signed him, Chocolate City, didn’t take the song seriously as a single. It wasn’t a club record and was far too slow to make the playlists in clubs or on radio. Anyway, the song was released just in time for Valentine’s Day celebrations.

Then came the tech advantage and the influencer-factor: the Canadian fashion model, Winnie Harlow, stumbled on the song with a friend and decided to use it in her dance video on social media, joined by record producer and businessman Diddy’s sons and a daughter, and the song went viral. “Love Nwantiti” seems to have shattered what was left of the glass ceilings against Afrobeats penetration in the world.

Fast forward to 2022, and the song had over one billion streams on Spotify. This is an icing on the cake for the song that made it to the number one spot on Shazam’s global charts, blowing up charts in the US, UK, Europe, and Asia and being considered the most streamed Afrobeats song of the moment.

The critical audience in the US raised a concern when CKay was interviewed on a famous hip-hop station: the American music critics would be awake to this new artist. They’d test his artistry, interrogate his talent and persona. Apart from making a hit song, CKay is one of the most articulate artists from the present-day Afrobeats’ generation. An unusual blend of calm and confidence, CKay has a clear vision of his music right from the onset. Though he started making money as a music producer, his hands-on production experience is an asset.

But is “Love Nwantiti” really that special to have topped the global music charts? Maybe not. Nigeria has produced many more goose pimples-arousing songs like Tuface’s “African Queen”, 9ice’s “Gongo Aso,” Weird MC’s “Ijoya,” Brymo’s “Ara nbe,” and Wizkid’s “Ojuelegba,” just to mention a few. But none of these great artists had the current streaming platforms to sell their music. They were at the mercy of pirates who fed off their work.

What about the likes of Wizkid, Burna Boy, and Davido? These are award-winning singers with personal tales of struggles, hard work, and massive collaborative projects with international artists, but they didn’t shatter global sales quite like CKay.

But on the flip side of the argument, people just love “Love Nwantiti” and that made it a major cross-over piece for this music generation. Yes, it was a social media challenge-enabled song. True, its popularity was driven by younger people, but there is no data available to understand the key factors behind its historic digital sales. That same phenomenon was observed in December 2021 when Fireboy DML’s Peru remix with Ed Sheeran knocked Mariah Carey’s “All I Want for Christmas” off the number one spot in the December 2021 UK Apple Music chart.

Weighing in on why current songs always have the technology advantage, the Founder and CEO, Mighty Media Plus Network Limited and cultural activist, Olumide Iyanda, offered his perspective, arguing that it was not a “discrimination” that started with the internet technology.

“The concept of younger artists getting more ‘Shazamed’ as it is now is not new,” he argued. “It is just another episode in the cycle of life. You will notice that over time, people who trend are at the forefront of what is popular. In the past, it was cartridge, cassette, vinyl, CD, or whatever it might be. If you are younger, chances are that you will take advantage of technology because technology will take you higher. Right now, the ones that are younger are the ones taking advantage of technology as it is.

“You may say it is an age thing. But that is what technology does. It pushes people who are trending and enhances their sales. Those who were ‘reigning’ then won’t be as big as new artists now, which is why they won’t have their music shazamed because they are the ones people are listening to right now. Older artists too have songs on shazamed but they are not being streamed like the younger artists.”

Commercial sales have never been used in adjudging the depth of artistry, but they are reliable score sheets for brands that love to invest in an artist. Should one be worried about brilliant artists who don’t get a phenomenal number of streams?

A few artists and bands from the old school era have thrived on the streaming platforms. The likes of Michael Jackson, Queen, Whitney Houston, Cyndi Lauper, The Beatles, and John Lennon have got billions of streams. But in Nigeria, tech has been discriminatory; more youths have digital skills than the older generation and tend to consume their content online. Young people are the force behind emerging social media platforms.

For Nigeria to democratise digital music sales, the older generation of musicians needs curators and managers of their portfolio to avoid being ushered into complete oblivion.