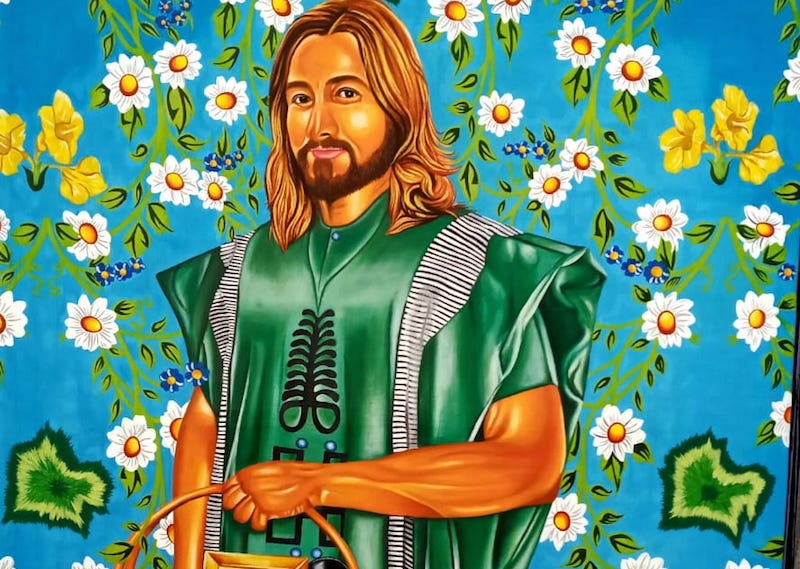 Mitchelle Innocent James also known as MitchyJ was still adding some fresh paints to the canvas when this conversation started. The portrait seemed amusing at first- an image of Jesus draped in an African traditional robe. It was easy to think it was about Easter celebrations that Saturday. But James was more concerned about the future elections and how we articulate the role of religion in human consciousness.

Titled, ‘Be Luxuriant: Wisdom to A Beloved Nation,’ the 3-day show was his first solo show. As a graduate of philosophy from the University of Uyo, his work is rooted in a careful juxtaposition of religion and moral responsibility in governance. For him, the Jesus persona is not a symbol of discord that is seen in Christianity today.

“Jesus is a moral teacher. His moral teachings are more prevalent in our time. He propagated the golden rule: do unto others what you want others to do unto you. And love your neighbor as yourself. And when you have systems and religions, you would see they have that element in their beliefs,’’ he began.

Through his colourful mixed-media portraits, James argued that many political figures have failed to imbibe the moral values from their various religious backgrounds in the way they manage public funds.

“The leaders take funds that belong to the nation and accrue them to themselves. Their families have the best- the best schools, the best cars. That means they do not lack love. But there is a distinction between how they treat their family members and what they do to society- their larger family.

“These works are targeted at this election period, to provoke conversation. Every day, Nigerians are dying and no one is resurrected. But you would celebrate the resurrection of Jesus but the ones whom he died for are suffering. You cannot be a patriotic leader if you cannot love,’’ he said.

In his work titled ‘Message to the South,’ the artist reveals that the resources are many but the managers are few. The fear is that in the next 20 or 30 years, we would be running into a new form of colonialism because the people who can manage their minds morally and who understand the value of humans in other parts of the world would come back again,’’ he said.