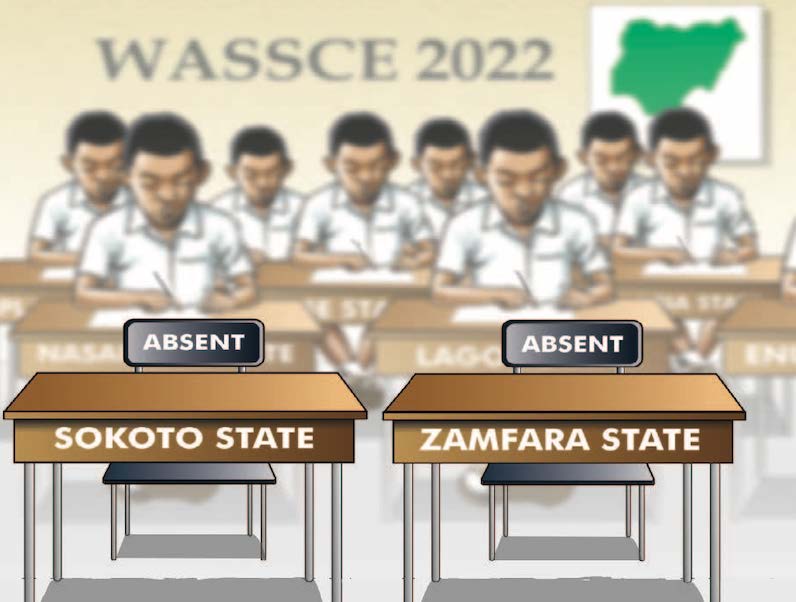 The states should do more to encourage education

It is most unfortunate that both Sokoto and Zamfara States did not present students from their public secondary schools to sit for the on-going 2022 West African Senior School Certificate Examination (WASSCE), which started on 16th May and will end on 23rd June. Students in private schools in the two states however enrolled for the exams, according to the Head of the West African Examination Council (WAEC) office in Nigeria, Patrick Areghan. Sadly, these are two of the most educationally disadvantaged states in the country.

The insecurity situation in Zamfara being bandied by officials could not possibly have prevented the state government from compiling the names of all, or at least most, public school students and submitting the list to WAEC before the deadline. Besides, how come that politicians can mount campaigns for various offices and are right now moving all over the state for the votes of delegates at their primaries? According to reports, WAEC refused to accept students from Zamfara State because of accumulated debt owed over several years by previous and current administrations. Meanwhile, there is money for politicians in the state to throw around.

In the case of Sokoto, this is the second year in a row that the state government did not present its public schools’ students for the exams. The commissioner for education, Bello Guiwa, was reported as saying the state chose to patronise National Examinations Council (NECO) and National Business and Technical Examination Board (NBTE) exams since it is not mandatory for students to sit for WAEC. While we agree with Guiwa that there is no compulsion on WASSCE, students often sit for its exams because it is older and generally considered more credible than the other ones. It also enjoys more prestige globally and should not have been discarded by the two state governments on flimsy grounds.

There is a claim that WAEC refused to accommodate public school candidates from Sokoto State in 2021 because the education ministry failed to upload the mandatory continuous assessment score (CASS) for its candidates. No excuse is good enough for this laxity. While Sokoto State has also experienced insecurity problems, especially on its northern fringes, this could not explain the failure to compile and upload continuous assessment scores. This is a serious indictment on the authorities in the state.

In defence, Mohammed Bello, spokesman to Governor Aminu Tambuwal said Sokoto students in public schools were not enrolled because WAEC failed to furnish the state with details of its Tax Identification Number (TIN) hence they had to look for alternative examinations. “Instead of supplying the state government with the required financial propriety code in compliance with the state’s fiscal transparency, accountability and sustainability programme, which stipulates for correctness in all financial dealings, WAEC chose to ask for an advance payment of 40 per cent on the 30,000 candidates proposed for sponsorship by the government last year,” Bello claimed. But WAEC has countered that “at no time did the council ask for upfront payment. The state government asked for 100 per cent credit facility, and we refused it.”

Whatever may be the truth, the authorities in Sokoto and Zamfara States must know that the failure to present students for WASSCE does not portray them in good light with respect to the education of their youths. That private schools in these states are registered for WASSCE indeed indicates that there is no excuse for what can be described as misplaced priorities. We hope the authorities in both Sokoto and Zamfara will work to ensure this does not happen again in the interest of children.