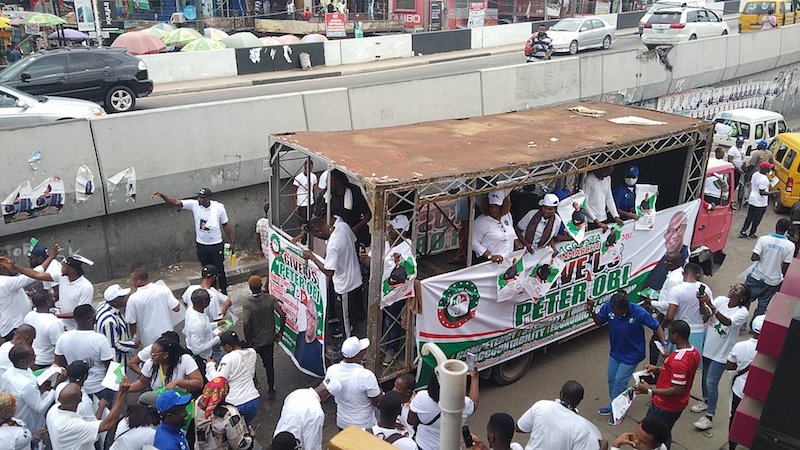 A coalition of youth groups rooting for former Governor of Anambra State, Mr. Peter Obi as president of Nigeria yesterday held a solidarity march for him in Lagos, Abuja and Awka.

The groups, comprising mainly youths, trooped to the streets in their large numbers.

In Awka, just like in Ikeja, Lagos and Abuja, the groups said Obi “is the best of all the aspirants seeking to succeed President Muhammadu Buhari in 2023.”

In Awka, the youths, doning white T-shirts atop a pair of jeans, converged on Ekwueme square in Awka, from where they danced through streets of Awka to the secretariat of the Peoples Democratic Party (PDP) at Udoka Housing Estate, Awka.

The youths begged the PDP to rescind its decision to throw open the contest for the presidential ticket, describing it as an affront on the South, especially the South-east zone.

At the PDP secretariat, Mr Ikechukwu Anonye, the Anambra State Coordinator for Peter Obi Support Network (POSN), and coordinating chairman of all Peter Obi Support groups presented a position paper to the leaders of the party in the state.

“Now that it is the turn of the South, and precisely the South-east. We are hearing that a committee has met and thrown it open for everybody. We consider it a level of injustice in the South-east.

“We want to register our support for him and this unjust move will not be accepted. We want them to revert to the South-east or the South in general and we know that they can rescind their decision.

“Every other zone has had a shot at the presidency except the South-east. If they do not do the right thing, I think PDP should forget it.

“Peter Obi is acceptable and is the only hope of the PDP.

“If he is this accepted and they decide to disenfranchise him, then it spells doom for the party and they should just go home in 2023.”

In Abuja, the groups after marching through major streets, assembled the PDP national secretariat where they chanted Obi’s name as the favourite candidate of the party.

It was the same demand for those marching on Ikeja, demand that there was no need for primary, saying the ticket should be given to Obi on a platter of gold.