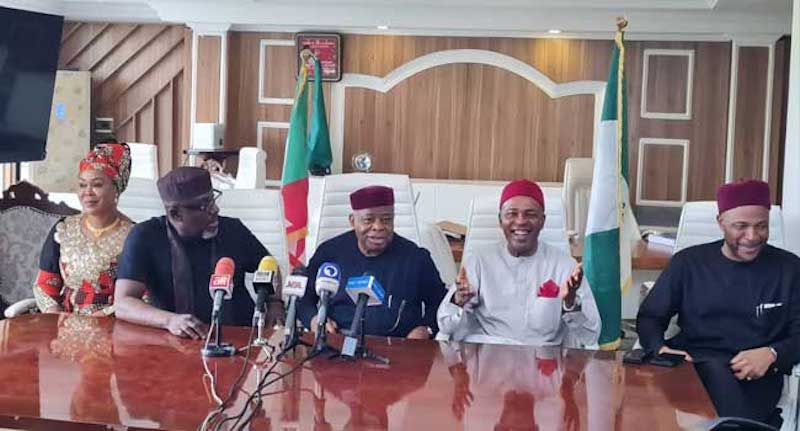 Presidential aspirants of South-east extraction under the All Progressives Congress (APC) Sunday resolved to support anyone among them eventually selected as the party’s candidate in the upcoming 2023 poll.

The meeting which took place at the Abuja residence of former Governor of Imo state, Chief Rochas Okorocha, was chaired by the erstwhile Minister of Science and Technology, Ogbonnaya Onu.

Although the Governor of Ebonyi State, Mr Dave Umahi was not physically present, Okorocha told journalists that he had joined the meeting earlier via videoconference and was fully in alliance with the resolutions.

A brief communiqué after the meeting read on behalf of the group by Nnamani, while lauding those who have wholeheartedly supported the aspiration of the South-east presidential hopefuls, stated that the aspirants were hopeful that the right thing will be done.

“At its review meeting held today, the 22nd of May, 2022 at the residence of Senator Rochas Okorocha, under the chairmanship of His Excellency Ogbonnaya Onu, the aspirants agree to make the following statements:

“That the president of the federal republic of Nigeria and the APC and its National Working Committee as well as the teaming members of the party are commended by the entire people of the South-east on their avowed commitment to the unity of Nigeria and the inclusion of all parts of Nigeria in the governance architecture of the country.

“That we commend all Nigerians who are committed to the Nigerian project by the wholehearted support of the aspiration of the south-east to produce the next Nigerian president in 2023.

“That in furtherance of these commitments, all aspirants here commit to align with any of the south-east aspirants that is accepted by and chosen by other Nigerians to fly the APC flag,” the communiqué read.

Speaking earlier Ken-Ohanenye noted that she joined the group because every of such coalitions need the kind of motherly care which only a woman can give, noting that Nigeria currently lacks that kind of arrangement.N

On his part, Nnamani stressed that being an election year with all its pressures, all journalists who are contributing to deepening democracy should be commended, promising that at all times politicians should give them factual and relevant information.

In his short remarks, Okorocha stated that from the gathering, it was obvious that the South-east parades some of the most brilliant human beings in the country.

“It’s obvious that the South-east has some of the best hands to pilot the affairs of this country. It’s the first time we are coming together like this and we are all lovers of this nation and we want Nigeria to hear all of us and do the needful.

“In case you were in doubt, there’s no division. We are one. In terms of exposure, the South-east has some of the best,” he noted.