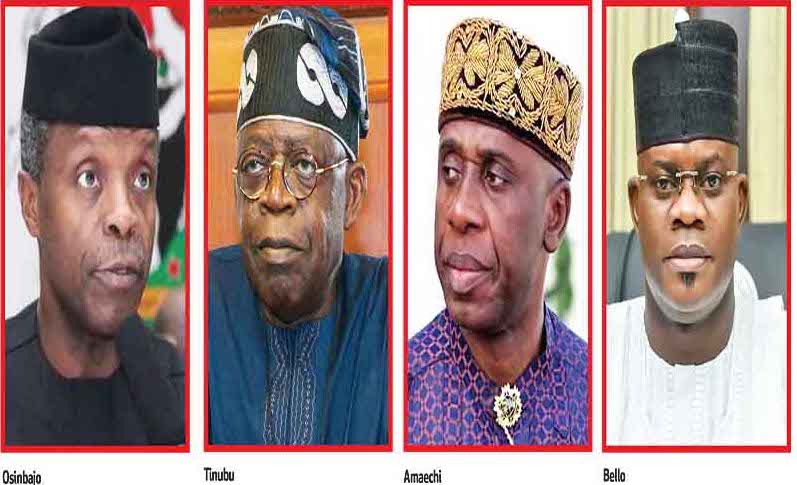 With the perceived poor performance of the present administration led by the All Progressives Congress, the emerging presidential aspirants of the party face a difficult task of convincing Nigerians, Vanessa Obioha reports

The body language of most presidential aspirants from the ruling party All Progressives Congress (APC) recently showed their veiled alienation from President Muhammadu Buhari’s administration. The reason for this may not be far-fetched. In the past seven years, Nigerians have nothing but diatribes and regrets. The hope of a better life as promised by Buhari during his electioneering year in 2014 has turned into despair as daily reports of insecurity, economic hardship and corruption continue to confront Nigerians.

The Buhari-led administration in the eyes of many is the worst the nation has ever experienced. From the banditry and insurgency that have characterised the polity leading to numerous deaths and homelessness, to the rising inflation, there is a level of fear pervading every part of society.

In both the northern and southern parts of the country, so many lives have been lost in recentimes. Even those abducted by dare-devil bandits who attacked an Abuja-Kaduna bound train over months ago, are still in the captivity of the terrorists.

The disturbing trend is becoming worrisome.

While many leaders who are courageous have repeatedly been criticising the government for failing Nigerians, other have opted to be silent to remain in the good book of the administration.

The Catholic Bishop of Sokoto Diocese, Mathew Kukah, who has been acting as the voice of the people, captured it succinctly in his Easter message recently where he criticised the president for his inability to tackle the myriad of problems.  According to him, the president  has destroyed every aspect of life in the country except corruption, “which he allows to thrive and grow.”

Nigeria, he said, has become one big emergency national hospital with full occupancy and the government seems to be in hibernate mode.

He continued: “Nigerians can no longer recognise their country, which has been battered by men and women from the dark womb of time. One would be tempted to ask, what is there to say about our tragic situation today that has not been said? Who is there to speak that has not spoken? Like the friends of Job, we stare at an imponderable tragedy as the nation unravels from all sides.

“The government has slid into hibernation mode. It is hard to know whether the problem is that those in power do not hear, see, feel, know, or just don’t care. Either way, from this crossroad, we must make a choice, to go forward, turn left or right or return home. None of these choices is easy, yet, guided by the light of the risen Christ, we can reclaim our country from its impending slide to anarchy.”

Against this backdrop, Nigerians wonder how those jostling for the APC’s presidential ticket would convince the people to vote for the party given that President Buhari’s performance sheet is filled with red marks. More so, how will they reignite hope in their party without mentioning how their leader has contributed to the problems?

Aspirants who have chosen not to say anything about the poor performance of the Buhari administration, do so for fear that they do not know the extent of the role he would play in the emergence of the party’s presidential flagbearer for the 2023 election. But others who have decided to take the risk, have been faulting some of his policies.

For instance, recently, Senator Bola Tinubu at a grand rally at the Mobolaji Johnson Arena, Onikan in Lagos, promised Nigerians that he would deliver a united and banditry-free Nigeria if elected president.

He told the gathered youths under the aegis of Progressive Youth of South-West who had declared their support for his presidential aspiration, that Nigerians were tired of excuses and lamentations of the past.

Tinubu had apparently admitted that the present administration failed to unite Nigerians and make the country bandit-free. In order to sell himself appropriately to the youths as the saviour Nigeria desperately needs, the National Leader of the APC tackled Buhari on his comment four years ago about Nigerian youths being indolent.

Buhari had made the popular expression “Nigerian youths are lazy” during a Commonwealth Business Forum in London in 2018. He described Nigerian youths as lazy folks who only want the good things of life without working for them.

“More than 60 per cent of the population is below 30, a lot of them haven’t been to school and they are claiming that Nigeria is an oil-producing country, therefore, they should sit and do nothing, and get housing, healthcare, education free,”  Buhari was quoted as saying at the conference.

During the rally, Tinubu indirectly responded to Buhari, telling the youths that they cannot be blamed for being “lazy” with erratic electricity supply in the country. He said no nation can witness “rapid development” without electricity, adding that the country cannot continue to give “excuses” for failure to generate a stable power supply. He noted that the country is blessed with enough gas that can be used to generate electricity and even export to European countries.

He further urged the youths to revalidate their Permanent Voters’ Cards and be ready to vote in the forthcoming 2023 general election.

In a similar vein, the Minister of Transportation, Mr. Chibuike Amaechi, who declared his ambition to contest the 2023 presidential election on the platform of the APC on April 9, 2022, vowed to fight insecurity and promote the stability and unity of the country if elected president in 2023.  Amaechi also acknowledged that Nigeria has been facing insecurity and other challenges but said it was a global problem.

He noted that the current administration of President Buhari has done well in building a better Nigeria, and promised to do more by improving the economy of the nation.

“I have never been the type who folds his arms and complains about inadequacies I see around me. I have always jumped in with both feet to do whatever I can to help, to try and bring relief to those suffering, to work to make things right where I see wrong. If you elect me as your President, I promise to play my part to the best of my ability. Every day I will rise and go to work for you. I will never forget the fact that I am there to serve you.

“We are facing some very serious challenges as a country. These are problems of insecurity, challenges of greater accountability in governance, youth unemployment and the scourge of spiralling poverty. These problems are however not the exclusive preserve of Nigeria. We live in a troubled world. The reality we used to know has altered in nearly every nation… Transborder crises have erupted in unusual places and placed the internal security of many nations under pressure. We are part of the Sahel, an area of the world that is subject to frequent terrorist attacks. Let us look at our current challenges as part and consequences of these global trends. I admit that Nigeria’s problems did not begin today. And they will not be solved overnight. But they are not beyond the capacity of our people to solve. Fortunately, that process has already started,” the minister had explained.

What Vice President Yemi Osinbajo who declared for the election last month, told Nigerians was however surprising. He said he was interested in the presidency because he would want to continue with the legacies of his principal.

Since he made the comment, Nigerians have been demanding to know these legacies. They are wondering how anyone would continue a legacy of failure and hardship. Many political analysts believe that Osinbajo’s statement was just a deceptive ritual facade to gain the confidence and support of his principal in a political system where blind and subservient loyalty is key to succession.

Another presidential aspirant who has inadvertently chided Buhari for not stamping his authority in effectively tackling the insecurity challenges confronting the country is Governor Yahaya Bello of Kogi State, who said if elected president in 2023, his administration would not tolerate buck-passing over insecurity.

Bello while answering questions from journalists at the second annual GYB Seminar for Political and Crime Correspondents and Editors in Abuja recently, noted that while President Buhari could not be in every state of the federation to ensure the security of lives and property when there are chief executives in place in the states, he would ensure that states are empowered to rise to the challenges. The aspirant insisted that he would not play politics with the security challenges in the country because it was a result of the failure of various administrations in the past.

“If I become the president, I will ensure that every Chief Executive of the various federating units sits up and does his or her jobs. I will not tolerate any lackadaisical attitude or passing of the buck to the centre. I will ensure that various federating units are strengthened. The majority of some of these crimes are politically motivated, especially the recent ones we are witnessing. However, the issue of security can never be brought out to the public so you would not expose your country to danger,” he said.

From their declarations, it is obvious that the aspirants believe that the present administration has failed to tackle insecurity. It is also obvious that their campaign promises will focus on surmounting insecurity but it remains to be seen if Nigerians would have any hope in a party that has brought them so much pain and tears in the last seven years.