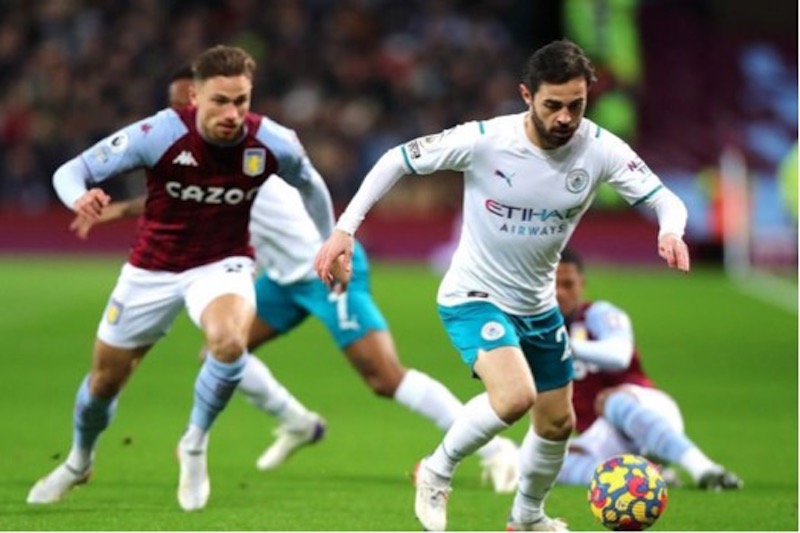 With just one point separating Manchester City from Liverpool and a game to go, Pep Guardiola would be hoping for victory against an Aston Villa side managed by a Reds’ legend, Steven Gerrard to ensure a fourth Premier League victory in five years tomorrow Sunday

Manchester City will aim to wrap up the Premier League title when Aston Villa pay a visit to the Etihad Stadium for Sunday’s final-day showdown.

The Citizens currently hold a one-point lead over Liverpool at the top of the table, while the Lions still have the slightest hope of finishing in the top half.

A few Man City fans may have prematurely got the bottles of champagne out when Nathan Redmond gave Southampton the lead against Liverpool, but the Reds turned the tide around to ensure that the race for glory would go right down to the final day.

‘Pep Guardiola’s side would only need a point this weekend had they secured victory over West Ham United, but a disjointed side went 2-0 behind to Jarrod Bowen’s brace before Jack Grealish and a Vladmir Goufal own goal rescued a point for the league leaders.

Regardless of what happens during Liverpool’s meeting with Wolverhampton Wanderers at Anfield, victory for Man City would see them lift the Premier League trophy for the sixth time in 11 seasons, and a draw would also suffice if Jurgen Klopp’s side slip up.

Guardiola will certainly not set his side up to draw, though, especially with City now finding the back of the net at least twice in their last eight Premier League matches, and their unbeaten run in the top flight now stands at 11 games.

The Citizens have also eased to three consecutive home wins over Brighton & Hove Albion, Watford and Newcastle United in the past few weeks – scoring 13 goals and conceding just one – and Guardiola’s 100 per cent record of five wins from five on the final day is also on the line here.

Steven Gerrard never won a Premier League title at Liverpool, but the Villa boss could now win the title for Liverpool, who are relying on their legendary midfielder to silence the Etihad crowd with his fatigued crop on the final day.

The Lions could not replicate their 3-1 Turf Moor win over Burnley from earlier this month as they played out a 1-1 draw with Mike Jackson’s side on Thursday, and it was the visitors who went ahead through Ashley Barnes’s spot kick before Emiliano Buendia got on the scoresheet himself.

Villa could have been heading for a defeat had it not been for a magnificent block from Tyrone Mings from Wout Weghorst’s close-range effort, while a string of saves from Nick Pope also served to leave the Lions 14th in the table and three points adrift of 10th-placed Brighton & Hove Albion.

Failing to keep a clean sheet in four successive matches does not bode well for Villa – who have lost each of their last 11 league games on Man City’s turf – before a trip to the Etihad, while a paltry tally of two wins from their last 10 games in the Premier League can certainly be described as ending the season with a whimper.

Gerrard has all the motivation he needs to try to get a result this weekend, but not since January 2000 have Villa won a Premier League match away from home to the league leaders – doing so at Leeds United  and continuing their recent spate of goal-laden home performances would be a fitting way for City to clinch the domestic crown.

Gerrard can help his former club win the Premier League title if his side can beat or draw at City and Liverpool beat Wolves.

“I can only understand these sorts of situations by thinking of myself in the role,” said Klopp.

“If I would play a game and could help former clubs- Borussia, Dortmund or Mainz, it would mean for me an extra motivation. That’s how it is.

“We’re all human beings. Stevie will take it 100 per cent serious without me calling him or whatever. I don’t have to, probably, the rest of the club did it already but I haven’t. Gerrard played 710 games and scored 186 goals for Liverpool during a 17-year career at Anfield, winning eight major trophies, including the Champions League in 2005.

However, he did not win the Premier League as a player but did come close when he was part of a Liverpool side who were three games from winning the title in 2014, only for his infamous slip to help Chelsea to victory at Anfield as City ended up finishing top instead.

“In terms of Liverpool, I totally understand and respect the external noise and questions that have been coming my way for some time,” said Gerrard.

“They are involved in a title race and I spent a lot of time there. It is disappointing when people mention integrity with me and Aston Villa and any of my players.

Liverpool have won this season’s Carabao Cup and FA Cup and have reached the Champions League final, which they will play against Real Madrid on May 28.

However, any hopes of achieving the quadruple will be over if City secure the Premier League title on Sunday.

Regardless of the result in the remaining two competitions, there will be a victory parade for the team in Liverpool on May 29.

“There are so many reasons to celebrate,” added Klopp. “We don’t know how many reasons but we already have enough.

“We didn’t have a parade two years ago when we were champions – it’s not for that reason but that’s another reason.

“I’m really happy that we can deliver what I promised at that time when I said that whenever it is possible that we will have a parade.

“It’s all about us and what we want to celebrate. It’s not about what other people think.”