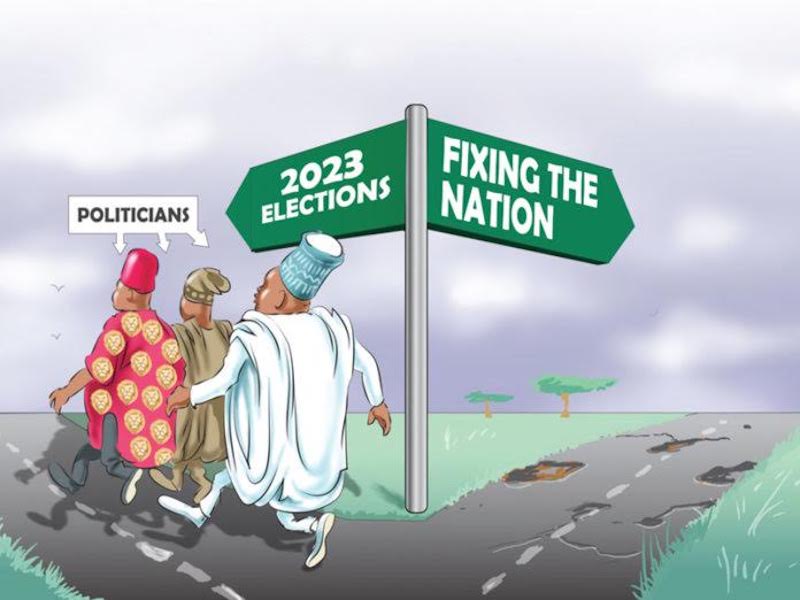 As the 2023 elections draw near, Nume Ekeghe Writes on the Impact of electioneering activities on the economy

With the primaries of the major political parties in Nigeria just around the corner, the economy seems to be taking a backstage as all focus in recent weeks has been on persons jostling for the various political vacancies in the country.

Like all the previous election seasons in the country, the naira is changing hands a lot with billions of naira being moved around in recent weeks as politicians and aspiring politicians pulled resources together to pay for the expression of intent forms in their various political parties.

However, it seems not only the naira is changing hands as there has been increased dollar demand in the country, further pushing down the value of the naira, particularly in the parallel market which is not officially supervised.

The value of the naira which for months have been stable at N580 on the streets for close to two months has since last week weakened to N596 to the dollar at the close of business activities on Monday this week. At the Investors’ and Exporters’ window, which is the official channel, the naira weakened to N421 from N419, which it closed last week.

According to the Managing Director, Afrinvest Research & Consulting, Mr. Abiodun Keripe, the pressure seen in the foreign exchange market is not unconnected to the increased spending by politicians.

“We live in a society or we operate in an economy where politicking takes a huge front t burner out whenever the season we are returning to the election season because of all the activities that need to be sorted out at the back end within and amongst the politicians and ensure respective parties and individuals interest are taking care of you know, so on the back of that you begin to see a bit of pressure in terms of demand for FX and clearly because a lot easier to transact in, in foreign currency when you’re trying to take care of this interest.

“I think dollar maybe would be a shy of N600 Maybe just shy of N600. So you probably can be getting on the black market rate between N598 to maybe north of N605. I think we’re already at that N600 level if it’s going to worsen, looking at the indicators or signs on the ground, there is clearly a possibility that it may worsen particularly as we get closer to the primaries and to be the main election in 2023, “he said.

Likewise, Head Financial Institutions’ Ratings Agusto & Co, Mr. Ayokunle Olubunmi, noted that, “what we are seeing is not different, it is something we see every election cycle. First of all, the election Period is always characterized by a lot of demand for FX because wanting to give someone N100 million is very difficult in naira but if I just have it in dollars it is easier.

“I anticipate a spike just before the end of this month, and also as you move towards the election. It is almost close to the N600 mark and it is going to get worse as demand would actually push up. Also with what we are seeing in the oil sector, we cant take advantage of the rising global crude oil prices, because that could have helped us to cushion it. Although the CBN is trying to push for the RT200 I don’t think the traction is going to be much.”

Commenting on the level of liquidity in the market, Olubunmi said, “obviously, we all know that election period is always characterized by high liquidity in addition to politicians that are spending money, don’t forget that for the government that also will rushing to complete some projects to help their campaign.

“So, on the fiscal side, there would be more spending. So in terms of liquidity, what we typically see is that during the election period, liquidities tend to be high. So, we anticipate so contractionary measure by the CBN. If you’ve been following the communique of the Monetary Policy Committee (MPC) meeting, you will notice that gradually, the number of people that are tending towards an increase in the interest rate is actually increasing by the day if you check the individual contribution.”

Olubunmi noted that in the coming months, the election industry will continue to boom as the other sectors of the economy not related to elections will take the back seat in terms of growth. For the economy in general, he said “there is something you can call the election-related industry, so things like printing, advertising, and all those areas will actually be recording a boom now.

“For the economy generally, it is not like 2019 when we knew the president is likely to come back but now there would be a new president in 2023 and we don’t know the person or his economic stance. So, most businesses are waiting and nobody is talking about expansion. So, most businesses are not in an expansionary mode. So there would be a slowdown in the business activities in the economy except for businesses that are election-related and businesses that are resilient like banking.

“On the macro economy, JPMorgan removed Nigeria from the emerging market index as well as investors’ sentiments which have seen FDI decline. So there are some critical economic decisions that must be made and you don’t know as a business what the person that would be in power would have.”

What ought to be done

In addressing the challenges of a near stagnant economy, Keripe said, “on liquidity management and how it plays a role in all of this, we should be having an MPC meeting this month so clearly, the CBN has a decision to make if to begin to tighten liquidity or to just maintain this stable like cluster approach in terms of interest rate decisions.

“What we have seen is that they have used more open market channels and moral persuasion and CRR to sort of tighten liquidity within the financial system.”

He added, “Clearly, the CBN has to play a role in tightening or providing some level of stability or curbing excess liquidity in the system so that we don’t have too much inflationary pressure, which already we are seeing and there are no signs of it abating anytime soon. I think system liquidity would increase as we move closer to the election although FGN is set to issue more domestic bonds to raise funds locally.