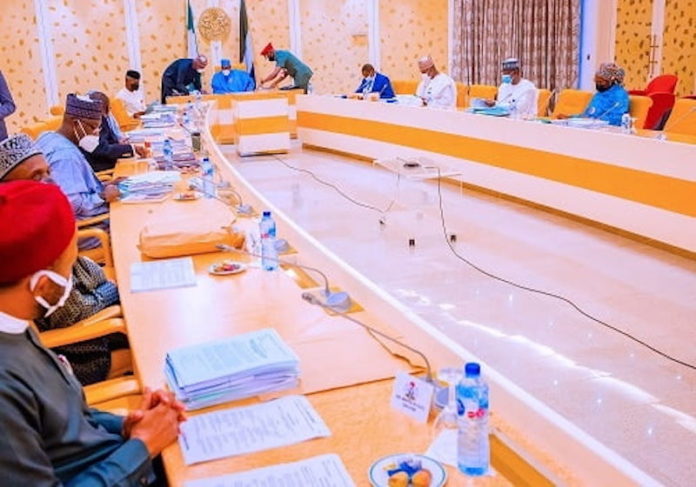 Though the Minister of Labour and Productivity, Chris Ngige was at the valedictory meeting, he issued a formal statement after the event to say that he had not resigned because he had pulled out of the Presidential race and notified the President.
Lai Mohammed at the press briefing announced that Buhari said he would immediately fill the vacancies created by the exodus of the nine ministers.

According to him, “The ministers will be replaced very soon without delay, he (The President) said so. I don’t know about reshuffling. He said the vacancies would be replaced very soon.
“You will recall that on Wednesday, Mr. President directed and I informed you that all ministers and other political appointees aspiring to contest for elective offices in 2023 general elections, should resign their current appointments.

“This morning, there was a valedictory service for 10 members of the Federal Council who have indicated their desire to aspire for higher offices. Nine of them were present and the 10th was absent with an apology.
“Mr. President used the occasion to thank the outgoing members of cabinet for their sacrifices and services. Mr. President also in addition to wishing them success in their endeavour, also expressed the confidence that given the expertise, the experience and what they must have garnered during their years in office, they, like other aspirants, were fully equipped to run the affairs of the state.

“Of course, Mr. President also admonished the remaining members of the Cabinet that the journey is still far. And that they should all redouble their efforts, be more diligent and be more committed to the success of the administration. At the end of which the outgoing ministers had a group photograph with Mr. President and also with the Chief of Staff and the Secretary to the Government of the Federation.”

Asked if all the ministers had tendered their resignations, he said, “Well. Mr. President said some have and others are in the process of doing so. But he thanked everybody for their compliance.”
On whether the Ministers can return to their positions if they abruptly change their minds Mohammed noted, “Only Mr. President can say that.”

He added, “I’m just sticking to the speech of Mr. President and so I don’t want to speculate what can happen and what cannot happen. But Mr. President’s speech was very clear. He thanked the outgoing ministers for their sacrifice and contribution.”
The Valedictory Session
At the valedictory session held at the State House, Abuja, the President assessed the nine outgoing members of the Federal Executive Council (FEC) and declared that many of them were eminently qualified to succeed him in May, 2023.

Buhari said: “I am happy to note that a significant number of cabinet members have become sufficiently equipped to aspire to higher elective offices, including the Office of the President. This shows the impact of the experience gathered while serving as members of the Federal Executive Council.
”I have no doubt that if the next President emerges from among former members of this cabinet, like any other aspirant, ample competence and outstanding service delivery would be on display. This will be part of our legacies to Nigerians.”

Buhari, who commended the departing public officers for serving the nation sacrificially, ”with dignity and honour”, had at the last FEC meeting on Wednesday, May 11, 2022 directed that all Ministers and other political appointees who aspire to contest for elective offices in the 2023 general election should resign their current appointments.
He said: ”I note that some have complied while others are in the process of doing so. I would like to use this opportunity to commend your decision and courage to contest for elective offices and your compliance with my directive.

”I also wish to thank you for your invaluable services to this nation through your contributions as Cabinet members. I wish you success in the upcoming elections and in your future endeavours.”
President Buhari told the ministers that looking back as the head of the team over the years, he had fond memories of incisive and robust discussions during cabinet meetings, rendering of performance reports during special sessions and presidential retreats.

Noting that the departure of some cabinet members had undoubtedly created a vacuum that should be filled, the President said appointments would be made without delay so that the business of governance will not suffer.
Speaking on behalf of the outgoing ministers, Godswill Akpabio, expressed gratitude to the President for giving them the opportunity to serve and contribute their quota to nation building.
“As we step aside from FEC, I want you to know that you have disciples in us. I want you to know that it is time for us to propagate Buharism.

“I want you to know that we are going to be working closely with the Minister of Information and Culture to take your message of transformation, love, patience, and administrative sagacity to Nigerians,” he said.
The Niger Delta Minister told the President that from his interactions with colleagues, leaving the cabinet was like the story of the Spanish play of “sadness and joy.”

He added: “Sadness in the sense that we are going to miss the continuous daily and weekly interaction with a father and learning from him; joy because we now have an opportunity to go to the wider audience in Nigeria to speak more of your achievements for this country.
“May one of us succeed you in order to continue the good legacies you have laid on ground. We have seen and know your vision. We know where you want the country to be.”
Nwajiuba, who had earlier tendered his resignation, was not present at the valedictory session.

The Minister of Labour and Employment Chris Ngige has formally pulled out of the 2023 presidential race.
In a statement signed by Ngige, he said: “Having also consulted widely with my family, constituents, supporters and well-wishers, it is my pleasure to announce the withdrawal of my interest and earlier decision to contest the office of the President in the 2023 general elections.
“As a result of this, I will not be participating in any of the internal party processes of the said election, starting with the primary.

“I took this momentous decision firstly in the overall interest of the nation, in order  to enable me concentrate on my job, and assist the President and the government weather the difficult last lap, in the life of the administration and secondly for other family reasons.

“I have since communicated this decision to the President and the Secretary to the Government of the Federation.”
Ngige also said his constituents, political associates and well-wishers across the country are by this statement informed of his latest decision, which also has the blessing and support of the overwhelming majority, hence supersedes any other interest, personal or otherwise.”