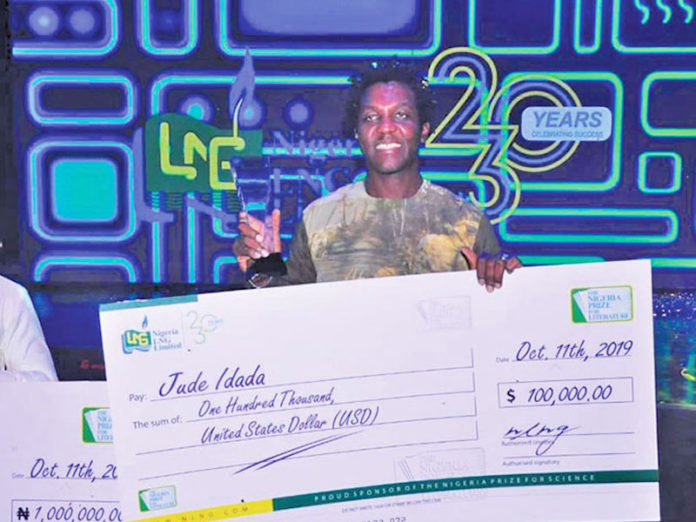 THE NIGERIA PRIZE FOR LITERATURE

Isn’t it noteworthy that – nearly two decades after its inception in 2004 – the acclaim for the Nigeria Literature Prize is yet to wane among the local literati? Curiously, the annual literary prize, which is being endowed by Nigeria LNG in partnership with the Nigeria Academy of Letters, seems, on the contrary, to be gaining more traction, having three times increased its cash value.

This contrasts with the scenario back then when the liquefied natural gas-producing company, which was incorporated on May 17, 1989, first announced the winner-takes-all $20,000 cash prize. For the sceptics, hitherto used to the modest cash prizes of the Association of Nigerian Authors’ literary awards, the highest of which managed to go as high as $2,500, this amount was unheard of.

Hardly would it have therefore surprised anyone that many saw the non-award of the prize – designed to annually rotate among the four literary genres of prose fiction, poetry, drama, and children’s literature – in its inaugural year as proof that the organisers had no intention of awarding such a mouth-watering amount to struggling writers, in the first place. Indeed, how could any of the three shortlisted prose entries that year be considered unworthy of the award?

It was as if its exclusion of the Nigerian writers in the diaspora from participating was not bad enough, a development that led to a handful, albeit vociferous, of disgruntled dissenters to label it the “Ghetto Prize”. But the organisers, unfazed by these criticisms, considered the locally-based Nigerian writers as disadvantaged since they were labouring in creativity-stifling conditions to produce their works and, therefore, needed some encouragement.

Besides, there was no gainsaying the fact that the Nigeria Literature Prize breathed new life into a hitherto struggling literary scene. In any case, despite the disappointment of the inaugural edition, there was a keen contest for the following year’s edition, which saw the cash prize split between two winners – the now-deceased Gabriel Okara with his poetry collection The Dreamer: His Vision, and his acolyte, the late Ezenwa Ohaeto, whose entry was titled Chants of Minstrel. It is not hard to imagine that hope would have dimmed for hordes of literary hopefuls who were intent on getting their hands on this highly-coveted prize had the organisers not awarded it.

There could have been no doubt about the fact that more and more writers began to warm up to the prize when Ahmed Yerima, with his play Hard Ground, was adjudged its 2006 edition’s overall winner. And this was happening at a time when the cash value had been increased to $30,000, a reassuring gesture that seemed to bridle the speculations of sceptics.

But only long enough for another non-award of the prize in 2009 to stir up another cause for dissent. That was the year when none of the shortlisted Nigerian leading poets – called the “first eleven” by the poet and polemicist Odia Ofeimum – were deemed good enough for the overall prize. Could the dissenters have forgotten that just a year before, in 2008, when the cash value of the prize, whose award rotation had returned to prose fiction, was raised to $50,000, Kaine Agary, whose entry was Yellow Yellow, was declared the winner? Probably because of the antecedence in 2005, no vociferous protests were heard after the prize – for children’s literature, this time – was shared by the two female literary titans, Mabel Segun for her Readers’ Theatre: Twelve Plays for Young People and Akachi Adimora-Ezeigbo for My Cousin Sammy.

Apparently, earning not only the trust of the local literati but also of the writers in the diaspora was important enough for Nigeria LNG. Consequently, the Nigerian writers in the diaspora were, for the first time in 2010, allowed to vie for the prize with their locally-based colleagues. That year, the playwright Esiaba Irobi became its first-ever foreign-based but also posthumous, overall winner with his play, titled The Cemetery Road.

Lingering doubts about the organisers’ goodwill should have been dispelled with the increase of the prize’s cash value to the current $100,000 in 2011. Thus, that year’s winner, Adeleke Adeyemi – a. k. a. Mai Nasara – made history as not only the prize’s first single winner in the children’s literature category, with his entry The Missing Clock, but also as the first winner of the current cash value.

The following year, when the spotlight returned to prose fiction, it produced another diaspora winner – Belgium-based Chika Unigwe, whose entry was titled On Black Sisters’ Street. Two consecutive winners followed on her trail – Tade Ipadeola in 2013 for his poetry collection, The Sahara Testaments, and Sam Ukala in 2014 for his play, The Iredi War – before the no-winner spectre returned to haunt the prize again in 2015 when it was the turn of the children’s literature genre. That year, the prize’s then Advisory Board chairman, Emeritus Ayo Banjo, minced no words in declaring the entries below standard and unsuitable for children. “Unfortunately, the entries this year fall short of this expectation as each book was found to manifest incompetence in the use of language. Many of them showed very little or no evidence of good editing… Hence, there will be no winner this year,” he told a gathering of stakeholders at the Lagos Sheraton Hotel in Ikeja that year.

Ever since then, the prize has moved on into a controversy-free cycle, consecutively producing winners like Abubakar Adam Ibrahim in 2016, the late Ikeogu Oke in 2017, Soji Cole in 2018 and Jude Idada in 2019. It is gratifying that the 2020/2021 edition—so-called because the COVID-19 pandemic disrupted its annual cycle—also produced Cheluchi Onyemelukwe as the winner in the prose fiction category for her novel, The Son of the House.

Now firmly engraved on the literary world’s consciousness and widely accepted by the local literati, the Nigeria Literature Prize retains the enviable position as the continent’s most prestigious. This is besides the fact that it is included in the list of the world’s richest literary prizes alongside the likes of the United States’ Windham-Campbell Literature Prizes, Denmark’s biannual Sonning Prize, Ireland’s International Dublin Literary Award and South Korea’s Park Kyong-ni Prize, among others.

With its growing number of winners, more Nigerian-born writers – and, consequently, their publishers – are beginning to anticipate each edition with the hope of participating. This year alone, for instance, 287 poets are vying for the overall prize.

Then, there is the introduction of the Literary Criticism Prize, worth N1 million, which, as the Nigeria Literature Prize’s complement, has produced winners who have earned their place in Nigeria’s literary hall of fame.

Above all, not only has the prize glamourised reading tours for its winners, it is also not unlikely that it inspired the institution of the annual 9mobile Prize for Literature (formerly known as the Etisalat Prize for Literature), which was inaugurated in 2013 as a pan-African prize celebrating first-time African writers of published fiction books.