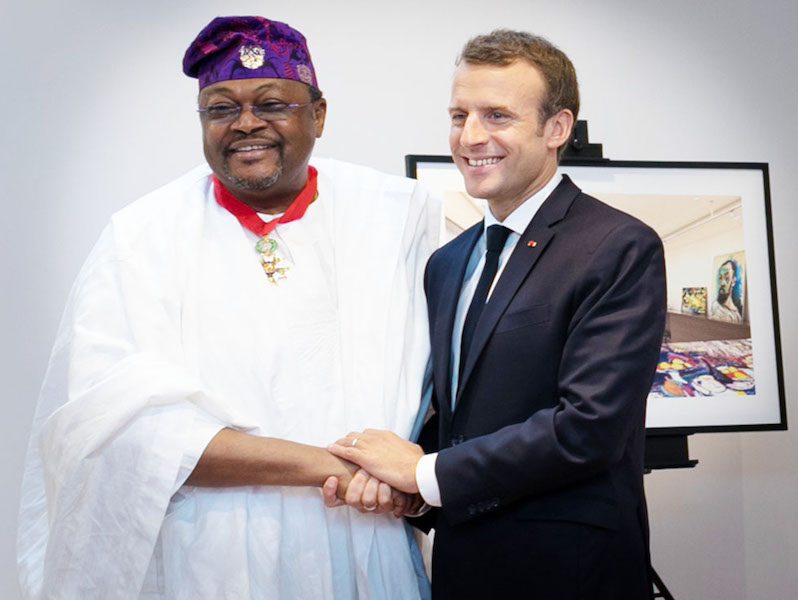 On Friday, April 29, 2022, Chief Michael Adenuga Jr, Nigerian billionaire businessman, and founder of Globacom Limited, clocked 60 years. Festus Akanbi writes on the activities of the man who has remained at the forefront of the Nigerian economic life with his entrepreneurial wizardry

What we are told is that government alone cannot shoulder the state’s responsibility. All over the world, governments court the support of entrepreneurs who step in to complement the government’s effort in the areas of job provisions, infrastructure support, and cooperation in terms of tax payment, among others.

However, despite their invaluable contributions to their immediate environment, entrepreneurs are sometimes seen as non-conformists, always seeking to break new grounds. That, perhaps, explains why the late billionaire philanthropist, Ted Forstmann, described the entrepreneur as a creator of the new and a destroyer of the old and is constantly in conflict with convention.

According to Forstmann, “The entrepreneur inhabits a world where belief precedes results, and where the best possibilities are usually invisible to others. His world is dominated by denial, rejection, difficulty, and doubt. And although as an innovator, he is unceasingly imitated when successful, he always remains an outsider to the ‘establishment.”

There is no doubt that Forstmann’s treatise on entrepreneurship fittingly described Chief Mike Adenuga, one of the world’s wealthiest men, who sits atop what is generally regarded as one of Africa’s largest business empires comprising oil and gas, telecoms, aviation, banking and real estate.

In each of these sectors, Dr Adenuga has moulded his companies into a major, if not dominant, player in all sectors. In the oil and gas sector, for instance, Conoil Plc is one of the largest and most profitable oil marketing companies in Nigeria.  Conoil Producing, the downstream arm of the conglomerate, made history by becoming the first Nigerian company to strike oil and produce it in commercial quantity.

In banking, Equitorial Trust Bank was one of the few banks that effortlessly met the N25 billion capital requirement without going to the stock market or merging with other banks except Devcom Bank which was also owned by Adenuga, the new entity later merged with Sterling Bank Plc.

In telecoms, Globacom is not only the most innovative network in Nigeria, but it is also the fastest-growing in Africa and the Middle East, with operations in Ghana, Benin Republic, Senegal, Gambia and Cote d’Ivoire. Adenuga’s investment in real estate is worth over three billion dollars. These companies provide direct employment to thousands of workers and millions of others indirectly.

As the nation celebrates Adenuga’s 69th birthday, the fact is that history will not forget this man of means who made history in 2010 when his telecoms firm commissined its international submarine cable, Glo 1. The cable has provided a solution to the long-standing problem of insufficient internet bandwidth for Africa and has led to much faster and more robust connectivity for voice, data and video.

As a history maker, Adenuga does not hesitate to change the course of business in favour of the poor population. At a period when other network providers resisted all pleas to adopt per second billing, Adenuga initiated the revolution in the telecom sector through the historic introduction of Per Second Billing and the crashing of SIM costs to as low as N100  by Globacom. This led to over 100 million phone connections in Nigeria. The network also pioneered such revolutionary products as Blackberry, mobile internet and mobile banking services in Nigeria.

He was one of the 50 pre-eminent Nigerians who were conferred with the Special Golden Jubilee Independence Anniversary Awards by the Federal Government of Nigeria in 2010.  He also holds an honorary doctorate conferred on him by Ogun State University.

In 2014, Dr Adenuga was among the three distinguished Nigerians bestowed with the prestigious award in the category of ‘Accomplished Contemporary Entrepreneurs’ in the grand finale of the celebrations of the centenary anniversary of the amalgamation of the Northern and Southern protectorates of Nigeria.

The other two Nigerians honoured together with Dr Adenuga in the same category are businessmen, Alhaji Aliko Mohammed Dangote and Chief  Innocent Chukwuma.

In July 2018, the French President, Emmanuel Macron, conferred France’s highest national honour of Commander of the Legion of Honour on Mike Adenuga, Jr.

Explaining why the French Government decided to confer the country’s highest honour on Adenuga, President Macron said the legendary business guru is “a true role model for Africa” who has contributed immensely to the growth of African and French economies.

Dr Adenuga thus becomes the first Nigerian to be decorated with the award of Commander of the Legion of honour, a promotion from his previous honour as Chevalier (Knight) of the Legion of Honour awarded to him in 2017.

According to the French Embassy, it takes 13 years to be promoted from Chevalier to Commander, but this higher-order for Adenuga has happened in eight months.

President Macron applauded Dr Adenuga on his promotion of the French language and culture in Nigeria, and also commended Bella Disu, Chief Adenuga’s daughter who conceived, coordinated and executed the Alliance Française project.

The French Ambassador, Denys Gauer, congratulated Dr Adenuga, saying that “his outstanding entrepreneurship and business ingenuity has today created so many jobs for Nigerians and, more importantly, value for the country.”

Gauer noted that Dr Adenuga has developed a strong business relationship with France through Alcatel in telecoms and Total in petroleum, adding: “I am very happy that your contribution to the development of the French-Nigerian relations and your appreciation of the French culture is in this manner recognised and honoured.”

A self-effacing philanthropist, Dr Adenuga Jr., through his company, Globacom, is the biggest supporter of football in Africa and has raised the profile of football in Nigeria and Ghana with the sponsorship of the Premier Leagues and national football teams of the two countries. The company has so far spent over N9 billion in cash and kind on Nigerian football. It has also transformed the annual CAF Awards and made it the most glamorous sports event on the continent. CAF has awarded Adenuga the Pillar of Football in Africa for his strong support for African Football at both national and continental levels.

He has won numerous other awards in recognition of his personal and business accomplishments among which is the African Telecoms Entrepreneur of the year for his courageous and rapid investment in the telecoms sector. He was early 2010 voted Nigeria’s Most Outstanding Business Personality in the last 50 years.

Adenuga was born in 1953, in Ibadan, into the family of Chief Mike Adenuga Snr. and Madam Oyindamola Adenuga, a successful trader and Yeyeoba of Ijebuland. He attended the famous Ibadan Grammar School, in Oyo State, Nigeria, for his secondary education and studied Business Administration at Northwestern State University, Alva Oklahoma, in the United States. He also earned a Master’s degree at Pace University, New York, majoring in Business Administration with an emphasis on Marketing.

Adenuga fondly attributes his business sense to his mother, who was also a businesswoman. Even as a student, the young Adenuga did not have things easy, and even had to hustle as a taxi driver in New York to pay for his university tuition.

Adenuga made his first million in 1979, at age 26, selling lace and distributing soft drinks. In 1990, he received a drilling licence and in 1991, his Consolidated Oil struck oil in the shallow waters of South-western Ondo State, the first indigenous oil company to do so in commercial quantity.

He was issued a conditional GSM licence in 1999; after it was revoked, he received a second one when the government held another auction in 2003. His telecom company Globacom spread quickly and started challenging the giant, MTN Group. It launched services in Benin in 2008 and has continued its spread across Ghana and Côte d’Ivoire, with more licences currently being prospected in other West African countries.

Indeed, Dr. Adenuga has built a public persona defined by near invisibility. In the age of social media and overexposure, it is a thing of surprise that the man who his admirers and traducers often refer to as The Bull, does not make noise on the social media, he seldom attends events, rarely makes public appearances and hardly does media interviews, yet he is always on the pages of our newspapers and on the lips of many Nigerians.