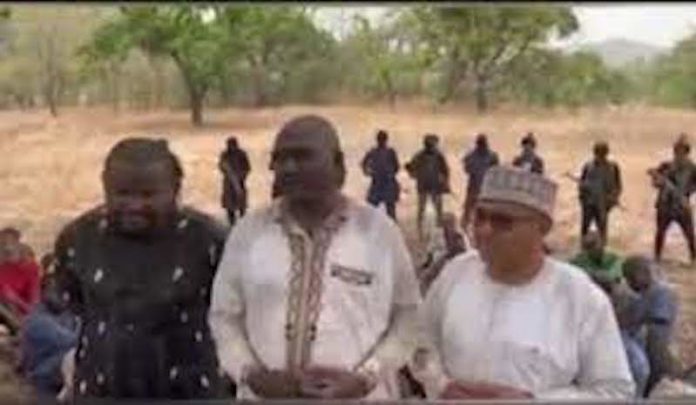 The 68 passengers abducted by terrorists on March 28 after the bombing of an Abuja-Kaduna train are today 34 days old in the prison of the terrorists, with families and relations frustrated by lack of information on the drive to free their loved ones.

Dr. Abdulfatai Jimoh, who speaks on behalf of the relatives of the abductees in Kaduna State, told THISDAY last night that they are being further traumatised by the fact that there was no contact with them either by the terrorists or the government for almost five weeks.

They followed this up on Thursday by releasing photograph of a new-born baby girl delivered in the terrorists’ den by a mother abducted during the attack on the Kaduna-bound train.

Clad in a thick pink dress and a light lemon sweater cap, with her eyes closed, the baby looked healthy, with credible sources saying the terrorists invited a doctor to take the delivery of the infant.

Three weeks back, the terrorists released a two-minute video, showing scores of abductees sitting in a forest, including men, women and children. Behind them was a group of gunmen standing in a line.

The abductees are evidently in anguish with some believed to be carrying bullet wounds.
Families and relatives are worried that they are being traumatised in the forest, amid mosquitos, hash conditions and many other dangers.

“He spoke when the second video was released on the need to hasten their release in view of the fact that his health is deteriorating. He was among the elders in one of the pictures,” he said.

The released Managing Director of the Bank of Agriculture, BOA, Alwan Hassan, while recounting his ordeal, said 41 women, 22 men, 5 kids were with the terrorists.

The federal government had assured that it would do everything necessary to ensure the release of those still being held hostage but families and friends of the victims said they had not seen anything concrete being done in this direction.

The spokesman of the affected families based in Kaduna, Dr. Jimoh, during his interview with THISDAY yesterday reiterated their demand that government must go into negotiation with the terrorists to secure the release of their loved ones alive.

Jimoh, lamented that they were yet to establish contact with their loved ones or even the hoodlums since the incident.

He urged the federal government to open a channel of communication with the terrorists.
Jimoh restated that affected families remain in serious anguish in the past 34 days and living like corpses.
The terrorists insist that they are not after a ransom, but an exchange of the abducted passengers with their commanders, who were in government custody.

The former military governor of Kaduna State, retired Col. Abubakar Umar has also reiterated his call on the international community to intervene and help free the abductees.

He stated, “The world must know what is happening. This government is trying to cover up this and we all must keep talking about this. Before you know it, these people would spend 10 years, like the Chibok girls.

There are thousands of kidnapped victims in northern Nigeria, but the governments don’t want people to talk about it.”
No fewer than 362 passengers were onboard the train at the time the terrorists struck on March 28.