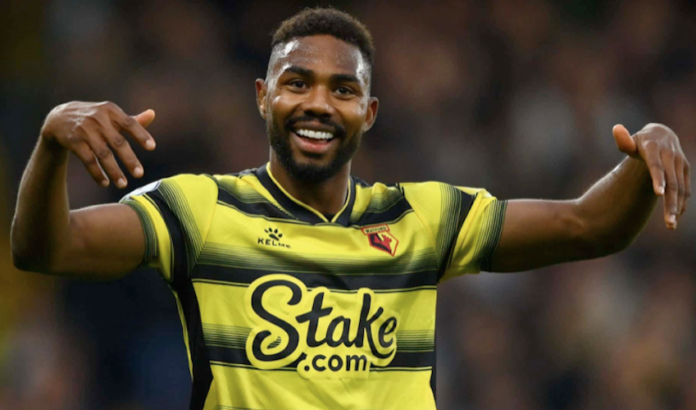 With Watford almost Championship-bound after failing to swim out of relegation waters despite change in the dugout, Super Eagles forward, Emmanuel Dennis may however still be plying his trade in the Premier League after Leeds United have shown interest in signing the former FC Brugge winger

With Leeds United close to securing their top-flight status and are looking to rebuild an attack that failed to flourish this term transfer insider, Dean Jones claims that Whites could potentially look to sign Watford forward Emmanuel Dennis ahead of next season.

Leeds have not been entirely woeful on their return to the English Premier League, with the Yorkshire-based side likely to retain their top-flight status with two wins from their remaining six league games.

But it has not been an enjoyable ride for the Whites in their first season back in the elite division.

Aside from having the worst defence, Leeds possess a lame attack that has only outscored seven other teams in the division, with only Brazil’s Raphinha managing double figures of goals.

The top priority for the club’s chiefs when the transfer window opens will be strengthening the defence and attack, and transfer expert Jones believes Dennis is one player Leeds could make a move for to boost their output in the future.

The Nigerian international, who only joined Watford in the summer, has enjoyed a decent start in England, scoring 10 goals and adding another five assists for relegation-threatened Watford.

Dennis can play anywhere in attack, is fast, tricky, and was recently crowned the nutmeg king in the Premier League.

The Super Eagles star costs Watford only €4 million when switching from Club Brugge, but he is already valued at twice that amount following his brilliant showings.

The Super Eagles striker joined Watford from Club Brugge last summer on a five-year deal worth £4.5m and with the Yellow Army currently placed 18th in the Premier League table with 22 points from 29 games and just three points off safety the 24-year-old Nigerian may be looking elsewhere at the end of the season.

The former Cologne star has taken the Premier League by storm this season, scoring nine goals and registering five assists in 27 league matches, directly involved in almost half of Watford’s goals this term.

Indeed, his performance has caught the eye of a number of big clubs, including Spanish LaLiga side, Villarreal, according to a report on Daily Mail.

The club will consider offloading several players if they are unable to avoid relegation in a bid to lower their wage bill and will demand for a fee of £25m for the Nigerian international.

Dennis has emerged as one of the bargain signings of the summer transfer window, with Watford paying four million euros to Club Brugge to sign the striker.

West Ham captain Mark Noble had labelled Dennis’ early strike in the Hammers’ 4-1 rout of Watford a great goal when the Hornets suffered their fifth successive loss in the Premier League despite their Nigerian talisman giving them the lead.

Dennis fired a rising shot into the top corner to break the deadlock after evading the challenge of Craig Dawson, taking his tally in the top-flight to eight goals in the process.

Speaking to BBC Sport post-match, the Hammers captain said: “They started with a great goal from Dennis but then I think we controlled the half and deserved to go 2-1 up.”

Only Liverpool’s Egypt winger Mohamed Salah has had more goal involvements than Dennis in the Premier League so far this season.

Indeed, Arsenal icon Ian Wright has highlighted the importance of Dennis to the Watford side after the red-hot striker scored again in a 4-1 loss to West Ham United in a Premier League clash at Vicarage Road.

With his strike against the Hammers, the Nigerian international has been directly involved in 10 goals in his last eight Premier League games for the Hornets (six goals, four assists), having a hand in 66.7 per cent of the goals Watford have scored in these games.

Statistically, those numbers clearly show Dennis’ importance to Watford, who could be without their talisman for at least three matches in the coming weeks.

Speaking on Premier League Productions’ Premier League Wrap, Wright said: “At the start Tim Sherwood mentioned that Dennis is the one if anything could happen it’s probably going to come from him.