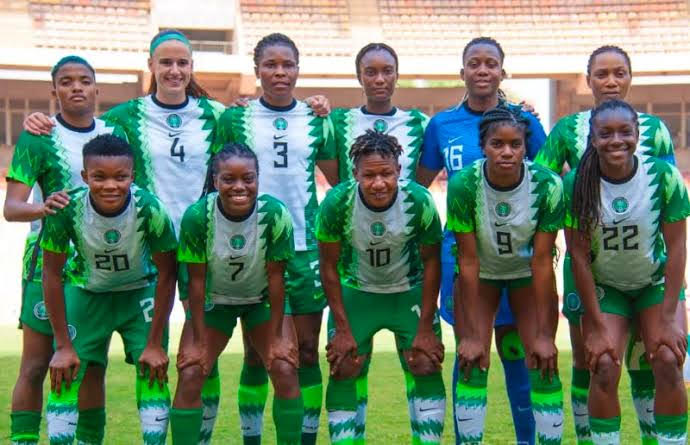 Nine-time African champions Nigeria will clash with reigning Olympic champions Canada in two friendly matches that will hold over three days in the cities of Vancouver and Victoria City.

According to Director of Communications of the Nigeria Football Federation (NFF), Ademola Olajire, two players – defenders Onome Ebi and Glory Ogbonna – were among the contingent that flew out of Nigeria aboard a Lufthansa Airline plane on Tuesday night, and connected a flight from Frankfurt to Vancouver on Wednesday.

The other players are to fly direct to Vancouver from their bases in Europe and the American continent.

Canada’s Women National Team are the reigning champions of Olympic women’s football, having won the gold medal at the Olympic Women’s Football Tournament in Tokyo in August 2021, after beating Sweden on penalties following a 1-1 draw after regulation and extra time.

The Super Falcons have won the African title nine times and recently qualified for the Women AFCON finals holding in Morocco this summer, after a 3-0 aggregate win over Cote d’Ivoire in February.

Newcomers Ifeoma Onumonu (in Abuja) and Esther Okoronkwo (in Abidjan) accounted for the goals that avenged the Falcons’ elimination from the Tokyo Olympics women’s football by the Ivorians.

The NFF is organising this two-match tour against the Olympic champions as part of the Super Falcons’ preparations for the 12th Women Africa Cup of Nations in Morocco.

NFF General Secretary, Dr Mohammed Sanusi said: “There are no longer minnows or minions in African women football. The championship in Morocco will serve as the qualifying tournament for the 2023 FIFA Women’s World Cup and we cannot afford to take chances,” observed the NFF scribe.

Only the four semi finalists in Morocco will qualify for the Women’s World Cup to be hosted by Australia and New Zealand next year.

Friday’s clash at the BC Place in Vancouver is another date for both teams after many years, following their epic 3-3 draw at the 1995 FIFA Women’s World Cup finals in Sweden.

Both will again clash at the Centennial Stadium in Victoria City on Monday, 11thApril. The two matches will kick off at 7.30pmNigeria time (3.30amVancouver time on 9th Apriland 12thAprilrespectively).