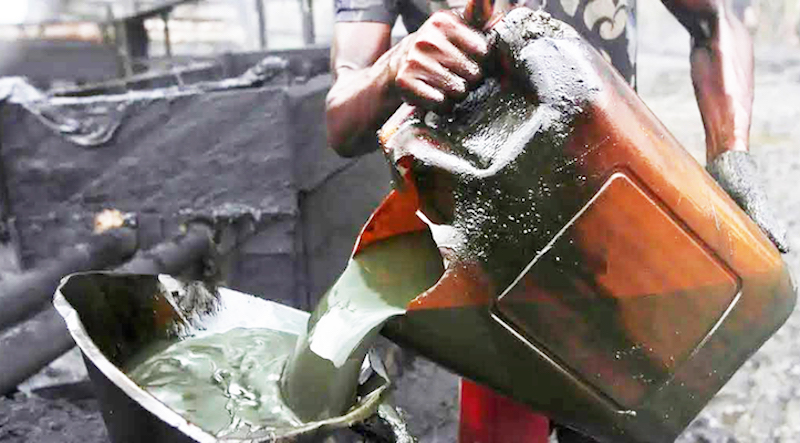 The incessant attacks on oil facilities and the attendant shortfall in oil revenue reached a boiling point last week with key operators in the oil and finance sectors warning that unless oil criminals and their collaborators are smoked out, Nigeria may be heading towards a major economic disaster, reports Festus Akanbi

Within a spate of two weeks, the urgency of the need to stop the growing sabotage to the nation’s oil production trended in the media as the major discussion among leading operators in the petroleum industry.

The kernel of their discussions was the mind-blowing figures of losses that some operators have incurred in the wake of the daring activities of oil thieves who divert crude oil to their hideouts daily.

And in an apparent response to the danger signal raised by concerned Nigerians, the federal government disclosed on Tuesday it had set up a panel of experts to audit the activities of oil companies in the upstream petroleum industry in the last two years to ascertain the actual volume of crude oil stolen by vandals, pointing out that the audit became necessary following allegations by some industry players about the high rate of oil theft in the sector, which had prevented Nigeria from meeting its production quota as approved by the Organisation of Petroleum Exporting Countries.

Oil theft has been perennial and unceasing and indeed, it gets worse by the year. In its latest audit report made public in July 2021, the Nigeria Extractive Industries Transparency Initiative (NEITI) indicated that in 2019, Nigeria lost 42.25 million barrels of crude oil to oil theft, valued at $2.77 billion.

The seriousness of the situation was underscored by a declaration by the federal government last week that the total value of Nigeria’s crude oil stolen between January 2021 and February 2022 is about $3.27bn (representing N1.361tn at the official exchange rate of N416.25 to the dollar).

According to a newspapers’ recent editorial, feeble remediation attempts by the government have been ineffective. In September 2021, the federal government set up an inter-ministerial committee to tackle the illegal refining of crude oil in the Niger Delta. The group comprised the oil and the security agencies, including the regulators and the military. Yet, the country experienced huge losses throughout the rest of the year despite the efforts of the committee.

The alarm raised by these captains of the Nigerian oil industry was yet to settle when the Governor of the Central Bank of Nigeria (CBN), Mr Godwin Emefiele, last week conveyed the fears of members of the Monetary Policy Committee (MPC) to the fact that the Nigerian economy is haemorrhaging due to the activities of a well-coordinated oil bunkering syndicate which is making a kill from crude oil diversion.

On December 30, 2021, THISDAY had brought the severity of oil theft to the fore with a screaming headline, ‘With Rising Theft, Nigeria Records 193 million barrels of Crude Oil Deficit in 11 months. This figure is otherwise translated into an estimated $3.5 billion of revenue lost to crude oil theft in 2021 alone, in other words, about 10 per cent of the country’s foreign reserves.

While speaking on the decision of the MPC after its 284th meeting last week, Emefiele, disclosed that the country is unable to meet its production quota due to unwarranted oil theft in the sector.

The governor, who spoke on the current fuel scarcity said, apart from the ongoing Russia and Ukraine war, a high trend of oil theft is another major issue causing disruptions in the nation’s economy.

“Apart from the Russia-Ukraine war, crude prices have increased due to supply shortage and of course, for Nigeria, we have not been able to meet the export quota primarily because of unwarranted oil theft that we see in our environment today. This has increased in the price of diesel and petrol,” Emefiele said.

The company stated, “All our current efforts to sustain and increase crude production are being aggressively undermined, even wiped out by the activities of economic saboteurs whose audacity continues to be growing by the day.”

Earlier, founding MD/CEO of Seplat Energy and Executive Chairman AA Holdings, Austin Avuru had warned that Nigeria’s oil production had reached an emergency critical status. He stated that some oil production wells don’t get to see 80% of production making it to the terminals due to oil theft.

Avuru made this known in a report titled “Reining in the Collapse of the Nigerian Oil industry” published by the Africa Oil + Gas report.

He urged the NNPC and regulators to set up a “war room” strategy to deal with the rising issue of oil theft in Nigeria.

He said that there are some pipeline systems now (particularly in the East) where 80% of production injected therein does not make it to the terminal. He disclosed that almost every producer is now cooking up “alternative evacuation” schemes that cost four to five times what pipeline export would normally cost.

“The stark reality today is that the IOCs are leaving, their decision is outside our control as a nation, in fact, over the last 12 years, Shell and Chevron have divested from a total of 21 blocks. It is now public knowledge that shell and ExxonMobil are now exiting the onshore/shallow water altogether.

“I project that, by Christmas of 2025, TOTAL would be the only IOC in J.V with NNPC.

“The situation is the same with domestic gas delivery, even though we are weaving all the right slogans about the future of gas in Nigeria, in the past 5 years, I can only point at a couple of Nigerian independents who are investing in gas development and processing of the domestic market,” he said.

He added that the state of the Nigerian Petroleum Industry is a national emergency, as oil production is down to about 1.4 million BPD and declining, and this includes 600K BPD from the deep-water. Domestic production has stagnated to about 1.2 billion cubic feet per day over the past five years at a time when projected production should have been 3.5BCf per day.

His list of suggestions includes the need for the NNPC and upstream regulators to set up a war room, some form of an effective task force to develop a blueprint.

He also called for a well-organised transition of the IOCs driven by a clear policy direction from the retreating IOCs to a crop of efficient independents with the requisite resources that will have to be implanted. He also called for a deliberate policy-driven return to the traditional onshore/shallow water terrains as 80% of Nigeria’s remaining reserves are still in this belt.

Another business leader that joined the conversation last week was the founder of the Tony Elumelu Foundation, a platform that promotes entrepreneurship in Africa, Mr Tony Elumelu. Elumelu, who is also the Chairman of United Bank for Africa Plc lamented the seeming triumph of oil vandals leaving investors in the sectors to reel in losses.

“How can we be losing over 95 per cent of oil production to thieves? Look at the Bonny Terminal that should be receiving over 200,000bpd barrels of crude oil daily, instead, it receives less than 3,000 barrels, leading the operator, Shell to declare force majeure,” he said in his verified Twitter handle.

Elumelu, who is also the Chairman of Heirs Oil and Gas was said to have made the shocking revelation while speaking at the Course 30 lecture at the National Defence College, Kaduna. This returns the oil theft and vandalism issue to the public discourse.

According to him, Heirs, just like other oil companies, suffers major losses daily. It records more losses than it sells. “Theft in the Niger Delta is a national menace,” Elumelu said. “We (Heirs) will produce crude oil and the thieves will steal like 50,000 barrels per day. In my opinion, it is one of the most lethal threats to our country because there is so much money in the hands of people who don’t pay taxes and people you don’t regulate. The country is not safe.” Apart from revenue loss, this threatens the security of the country. The thieves deploy the resources to acquire sophisticated armouries and can face off with the state security agents to achieve their nefarious aims.

Economy analysts, therefore said the challenge rests squarely on the shoulder of the President Muhammadu Buhari administration to declare an all-out war against oil thieves so that the whole gains of the current sharp increase in crude oil prices will not elude Nigeria.

This is why Nigerians will be expecting a thorough job by the probe panel announced by the Chief Executive of the Nigerian Upstream Petroleum Regulatory Commission (NUPRC), Mr Gbenga Komolafe. It is a report that must not be put under the carpet, no matter the statuses of those involved.