‘NEXT TITAN Has Produced Employers of Labour’ 2 mins ago 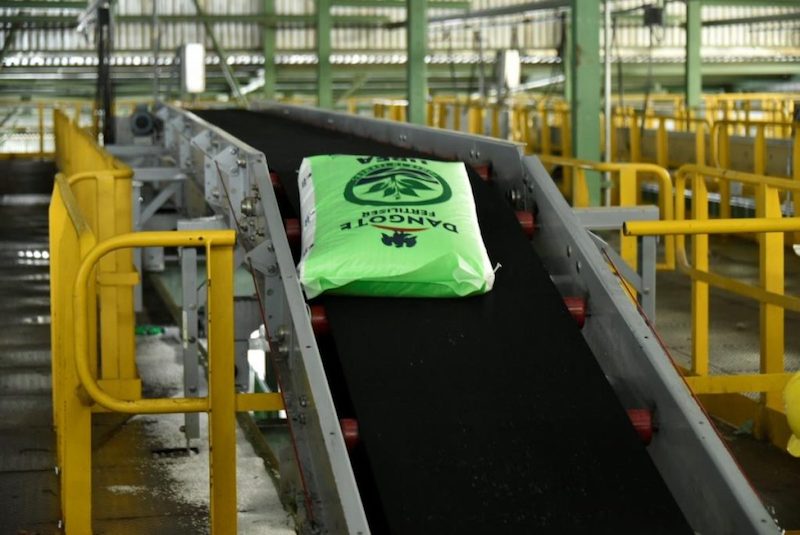 Nigeria’s stake in the global trade supply has just been increased with the launch of the three million metric tonnes per annum capacity Dangote Fertiliser in Lagos by President Muhammadu Buhari.

The Urea Plant, located at Ibeju Lekki Free Trade Zone, within the periphery of the Dangote Refinery currently under construction, is promoted by Africa’s global enterprise, Dangote Industries Limited. Of significant importance of the timing of the inauguration is that the plant would be pumping a fresh three million tonnes of granulated Urea into the country and the world supply amid the impact of increasing prices in the aftermath of the Russia-Ukraine war.

With the current economic malaise facing Nigeria which has decimated foreign exchange intake, the Dangote Fertiliser output would be reversing an unsavoury trend in Nigeria’s balance of trade in which hundreds of millions of dollars is expatriated on fertiliser import annually. According to the United Nations Commodity Trade Statistics Database (COMTRADE) on international trade, as of 2020, Nigeria’s imports of Fertiliser was US$261.69m

Since agriculture contributes the highest to Nigeria’s GDP at 27 per cent, the successive government has made efforts to promote agriculture through various incentives to stakeholders so that the nation can reduce reliance on imported foods by growing what it eats and eats what it grows. This, the governor of Central Bank, Godwin Emefiele said is exactly the economic policy thrust of the present administration. And this, it has been executing, through the deliberate growing of her fertiliser industry.

Emefiele reported on the occasion that private sector participation has increased especially since 2015 as the government continues to drive fertiliser consumption through its Presidential Fertiliser Initiative (PFI), with the ultimate aim of achieving food self-sufficiency.

It was against this background that President Buhari was excited when he saw the $2.5billion humongous state-of-the-art Urea plant. He said: “This fertiliser plant is expected to further advance this administration’s drive towards achieving self-sufficiency in food production in our beloved country, Nigeria.

While lauding the Chairman of Dangote Fertiliser Limited, Aliko Dangote for his economic patriotism and commitment to the socio-economic development of our country as well as the well-being of the people, he assured that the new plant will help his government to reduce poverty, increase the inflow of foreign exchange and reduce dependence on importation of fertiliser.

“The nation also stands to gain extensively in earnings of foreign exchange from the excess production of the plant. I am informed that we have already started exporting to USA, Brazil, and India.”

With the feat attained in local cement production and now fertiliser, the president reassured all Nigerians that the government is focused on providing an enabling environment for private sector investors to thrive. We will continue to improve on infrastructure, power, security and enact relevant laws and regulations that will drive investments in the economy.

Africa’s richest man and promoter of the project described the new plant as a game-changer, as it can make Nigeria self-sufficient in fertiliser production, with spare capacity to export to other markets in Africa and the rest of the world. He added that already, Dangote fertiliser has reached the markets in the USA, Brazil, and Mexico.

According to him, the fertiliser plant, which is the largest granulated Urea fertiliser complex in Africa, occupies 500 hectares of land, was built for $2.5 billion, and is expected to reduce drastically the level of unemployment and youth restiveness in the country through employment opportunities. To him, the plant is expected to generate new jobs with top-quality fertiliser being available and in sufficient quantities for the farmers.

Dangote Fertiliser, according to him, would ensure the emergence of farmers in the country, providing hundreds of jobs and ushering in a new era of agricultural agriculture entrepreneurs.

“This breed of agroprenuers will take to farming on large scales, providing food and raw materials for our industries,” he added.

An innovation that the company is bringing on board in the fertiliser industry, Dangote explained is the rolling out of soil laboratory, which would transform the agricultural sector in the form of extension services for small and medium-scale farmers. Dangote fertilizer, he added has set up a well-equipped fertiliser soil testing laboratory to enable it to analyse and identify soil deficiency and the appropriate fertiliser blend. This became necessary because according to him, “studies have shown that applying the right fertiliser to the soil will boost productivity. This service is to cover all the geopolitical zones, and will surely change the agricultural landscape in the country by transforming farming into a lucrative profession.

“Dangote Fertiliser is working with Farmer Associations, Corporate Farmers, NPK Blenders, NGO/development partners and State Governments all over Nigeria, and governments across Africa and beyond who are looking for a sustainable approach to improving soil quality and farm yields,” he explained.”

Lagos State Governor, Mr. Babajide Sanwo-Olu boasting of the environmental friendliness of the state, a situation that has encouraged investments in the state, commended Aliko Dangote for always blazing the trail, noting that the state government was happy to be hosting many of his businesses. He added that “with the largest fertiliser plant in Africa in Lagos and the largest refinery in the world coming soon, there is nobody that would not be proud of Alhaji Dangote.”

The governor stated that Nigeria would quickly forget its many economic problems if another entrepreneur like Dangote could be replicated in other regions of Nigeria while assuring that private investors could always count on the Lagos State government when it comes to the provision of an enabling environment to make businesses thrive.

Group Executive Director in charge of Capital Projects and portfolio development, Dangote Industries Limited, Mr. Devakumar Edwin, whose team oversaw the construction of the plant, explained that the new plant was purpose-built with the vision and mission of the company in mind saying the new urea plant is to make Nigeria self-reliant in food production by improving crop productivity for the farmers and to provide distinctive, high-quality fertiliser products and services with a sustained commitment to customer satisfaction, whilst delivering superior returns to our stakeholders.

Edwin pointed out that part of the strategy of the company is to make fertiliser affordable and available to farmers, eradicate the influence of middlemen, and improve production efficiency through research, innovation, and the latest technology.

“We will ensure customer satisfaction and protect stakeholders’ interest. We will be the leading manufacturer of quality and affordable fertiliser products all over the world and will become the most preferred manufacturer and supplier of fertilisers and other Ammonia products in Africa.”

Given the salient features that stand out in the new Urea plant, the Director said “Dangote Fertiliser complex consists of Ammonia and Urea plants with associated facilities and infrastructure to produce three MMTPA Urea. The complex consists of 2 x 2,200 MTPD Ammonia Plants based on Halder Topsoe technology; 2 x 4,000 MTPD Melt Urea Plants based on Snamprogetti technology; 2 x 4,000 MTPD Urea Granulation Plants based on Uhde technology; a Captive Power plant comprising of 3 Steam turbine Generators of 40 MW capacity each totaling 120 MW and 3 Auxiliary boilers for 40 ATA steam generation of 200 TE capacity each.

“Overall, the goal of our soil testing is to provide an accurate assessment of the soil’s fertility to recommend the right dose of fertiliser.

With the Nigerian population projected to rise to 262 million by 2030 and 398 million by 2050, Dangote Industries Limited, as a true leader in the Nigerian business space, may have seized the initiative to actualise a vision where Nigeria will be self-sufficient in catering for its food consumption.