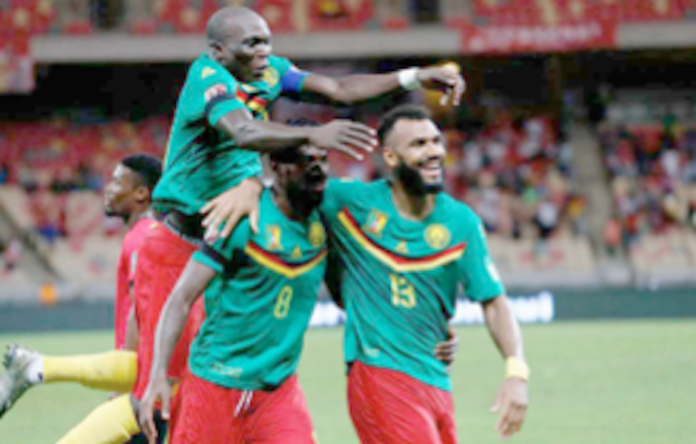 The Indomitable Lions of Cameroon might have installed themselves as competition favourites with a string of impressive victories, yet an upset may be on the cards as debutant, the Scorpions of Gambia hope to continue their Cinderella run in the 2021 Africa Cup of Nations. Buoyed by their victory over the Super Eagles, Tunisia would be hoping to get the better of a very physical Burkina Faso side in the second quarter final match

Host nation, Cameroon gets the ball rolling in the quarter-finals of the Africa Cup of Nations when they lock horns with Gambia at the Douala Stadium today.

Gambia have enjoyed a sensational debut at the tournament, claiming three wins and keeping three clean sheets from their four games and will look to cause another major upset.

Despite being the lowest-ranked side in the Africa Cup of Nations, Gambia find themselves in contention for a place in the semi-finals after a superb run so far.

The Scorpions, who are making their first appearance at the tournament, kicked off their campaign with a 1-0 victory over Mauritania on January 12, before holding out for an impressive 1-1 draw with Mali four days later.

Tom Saintfiet’s men wrapped up the group stages in style as they stunned Tunisia to a 1-0 victory at the Limbe Omnisport Stadium.

Gambia carried on their habit of causing upsets into the knockout stages of the tournament as they put on a sensational show of class to grind out a 1-0 victory over Guinea in Kouekong last time out.

In what was their third 1-0 victory at the competition, Bologna forward Musa Barrow struck the winner in the 71st minute to send Guinea crashing out of the tournament.

Meanwhile, with just three games away from conquering the continent, Cameroon will feel delighted by their performance on home soil and confident in their chances of going all the way on home soil.

The Indomitable Lions enjoyed an unbeaten run in the group stages, claiming successive wins over Burkina Faso and Ethiopia in their opening two games, before being held to a 1-1 draw by Cape Verde in their final group game.

With seven points from three games, Cameroon secured smooth passage into the knockout stages after finishing at the summit of Group A, three points above Burkina Faso and Cape Verde, who were level on four points.

Toni Conceicao’s side continued their charge for their sixth Africa Cup of Nations title last time out when they claimed a 2-1 victory over a Coronavirus-hit Comoros side when they squared off at the Paul Biya Stadium.

After Karl Toko Ekambi opened the scoring just before the half-hour mark, Vincent Aboubakar continued his sensational goalscoring form as he doubled the advance in the 70th minute before Youssouf M’Changama scored an absolute beauty from a free kick to pull one back for the newcomer.

Cameroon head into today’s game unbeaten in each of their last eight games across all competitions.

Meanwhile, fresh off the back of eliminating tournament favourites Nigeria, Tunisia square off against Burkina Faso for a place in the semi-finals at the Roumde Adjia Stadium today.

This will be the first meeting between the sides since they both met at this stage of the tournament back in 2017, when the Stallions claimed a comfortable 2-0.

Burkina Faso’s journey at the Africa Cup of Nations has been nothing short of a bumpy ride, but they have made it to the last eight all the same and will be delighted with their performance so far.

The West Africans got their tournament underway with a 2-1 defeat at the hands of host nation Cameroon in the opening game before narrowly edging out Cape Verde 1-0 four days later.

Kamou Malo’s men wrapped things up in the group stages with a somewhat disappointing 1-1 draw with Ethiopia.
Despite picking up four points from nine available, Burkina Faso finished runners-up in Group A, three points off first-placed Cameroon and level on points with Cape Verde, who secured qualification as one of the four best third-placed sides.
Les Etalons then needed penalties to see off a spirited Gabon side in the round of 16 at the Limbe Omnisport Stadium last Sunday.

After going ahead courtesy of Bertrand Traore’s’s first-half strike, Adama Guira scored an own goal to level matters and with nothing separating the sides after 120 minutes, the game progressed to penalties where the Stallions secured a 7-6 victory in a nervy encounter.

Burkina Faso, who will be looking to make it to the semi-finals for the first time in five years, head into today’s game unbeaten in all but one of their last 10 games across all competitions.

Tunisia, on the other hand, picked up their biggest result at the tournament so far when they stunned Nigeria to a 1-0 victory in their last-16 clash last time out.

In a nerve-racking encounter at the Roumde Adjia Stadium, 31-year-old forward Youssef Msakni, scored the winner when he drilled a long-range shot past Maduka Okoye two minutes after the interval.

This followed a disappointing run in the group stages, where they finished as one of the four best third-placed sides after managing just three points from their three games in Group F.

Buoyed by their victory over the Super Eagles, Mondher Kebaier’s’s men, who are making their 15th consecutive appearance at the tournament, will now look to go all the way and repeat their 2004 run, when they made it to the final and defeated Morocco 2-1 to clinch their first continental title.