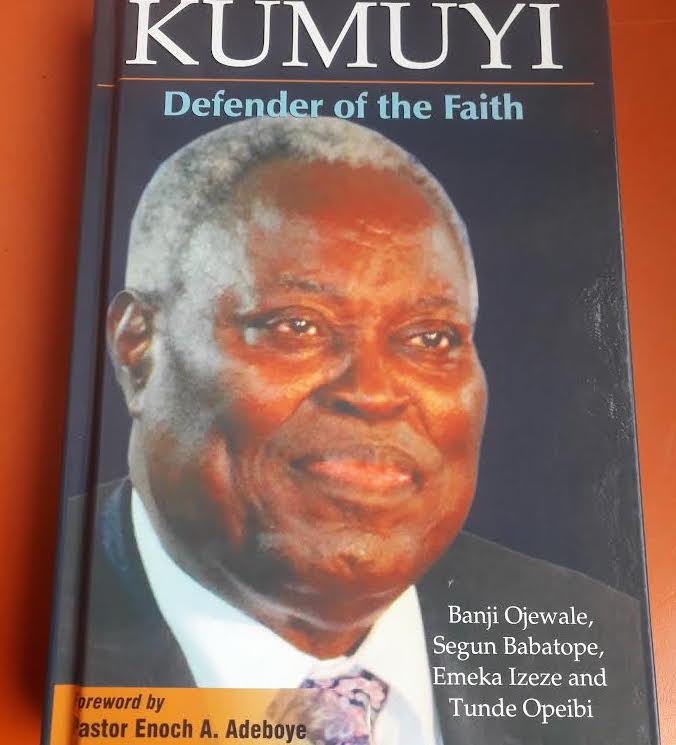 Based on the life and ministry of a quintessential cleric, the biographical book by four writers titled ‘Kumuyi: Defender of the Faith’ is a commentary on a preacher’s life vis-à-vis Pentecostal leadership style, says Yinka Olatunbosun

If you’re looking for an efficiently rendered account of Pastor (Dr) William Folorunsho Kumuyi’s life, then this 325-paged book is just a click away. Titled, ‘Kumuyi: Defender of the Faith,’ the book is a product of the team work executed by a group of researchers and writers.

Banji Ojewale, Segun Babatope, Emeka Izeze and Tunde Opeibi began the storytelling by capturing the milestones in the life of Kumuyi, the founder of The Deeper Christian Life Ministry.

This religious institution would later blossom into sections such as the theological school, traveling ministry arm with missionaries in many countries of the world and other affiliate organisations. In 2013, Kumuyi was named among the World’s 500 most influential persons by Foreign Policy Magazine.

The 14 chapters that make up the book are chronicles of his early life and education, his march to ministry, his leadership persona and other personal stories.

Captured in a dignified language, the writers unravel some aspects of Kumuyi’s private life, his challenges and how he surmounted them. The writers tilt the mirror so that each reader can get a view of Kumuyi from different defining angles. Kumuyi is described as a brilliant academic- with a first class degree in Mathematics and a great prospect in the secular world.

But his curiosity in the bible led him to start a small bible study group called ‘Truth seekers’ precisely in 1975 and that led to the revelation of his life as a cleric.

His journey into miracles was pivotal to the expansion of the Deeper Life Bible Church. Inspired by John Wesley, he questioned some of the foundational teachings that are popular in many churches and began to search the scriptures for the authentic voice of God.

The writers’ admiration of Kumuyi is perceivable in the way they crafted Kumuyi’s persona with words. For them, Kumuyi is an exemplary Christian-adopting an ascetic lifestyle. His adherence to godly principles have set him free of temptations and scandals.

With a foreword by Pastor E.A. Adeboye, the book also beams light on the preacher’s style of ministry- devoid of drama and rhetoric. The writers juxtaposed Kumuyi’s aversion for self-promotion and self-aggrandisement with the entertainment-oriented style of ministry that is predominant in churches today.

The book ‘Kumuyi: Defender of the faith’ strikes a reader like a commentary on pentecostal leadership through the character of Kumuyi. To lend credence to Kumuyi’s leadership style, some Deeper Life pastors and close associates were interviewed.

Rather than sustain the logical prosaic style that they begin with in the first four chapters, the writers couldn’t help the clash of ‘press and prose’ with the intrusion of their journalistic writing as soon as the narration reaches the ministry episodes.

The writers moved the story from being a documentary to a tribute of sorts. And it is expected because as Kumuyi’s mentees, their admiration of the protagonist must have been rooted in their personal experiences with him.

But they decidedly tucked details of these away perhaps to make the storyline less loaded with intimate details. In lieu of that, real archival pictures constitute part of the visual memoir. And that added to the aesthetics of the book by Elite Publishing Academy.